Since all of my fights are scripted I’ve been adding dialogue that runs when Amber uses the vore move specific to the encounters that have it. This update has only 2 encounters you can use it in, as we get further into the game, encounters with enemies you can vore will probably get more common as Amber’s capacity gets better.

There aren’t art popups for it yet but that’s a good idea. I might make a set of generic ‘popup bubbles’ with various belly sizes for smaller scenes.

This was an enjoyable game. It has a lot of character, and while I think I should wait until a later version to go more in depth about it, I will say that it was sad to see it go when it was over. I almost never get attached to games like this. Keep up the good work.

Version 0.1.2 “The Twisted Lovechild of Walmart and Ikea”

This version continues the main storyline.

DOWNLOAD
To transfer your save, open the “www” folder in your previous instillation, and copy the “save” folder into the new version’s “www” folder.

the version numbers are midlly confusing.

Very fun game! I just got done with the current version of Some Bullshit, and I must say that Apocalypse XL aims to be a contender for my top stuffing-based RPG. Keep up the good work.

I had one bug to report for the 0.0.5 version, I haven’t tested it in 0.1.1. While fighting the 7/11 monster, Janet got downed before I finished it off. I couldn’t resurrect her as there was no Purple Drank available at the time. After turning in the quest, I got to see the first few chat bubbles of the dorm room cutscene before it ended abruptly and gave me a Game Over. I think the point at which the Game Over occurred corresponded to right before Janet ran to the kitchen. I needed to revert to before the monster and win without being downed to see the full cutscene. No biggie, but the bug might affect other cutscenes.

Looks like that happens cause the game removes Amber from the party for that cutscene. Good to keep in mind for the future, I can fix that by healing the party before scenes that remove a member.

Really solid update, fun middling-effort fights to keep the focus on the tummy and boatloads of flavor text and CGs. Eagerly following this one

Really liked the vore there, you actually managed to make it funny and not overpowered by carefully limiting it to a few scenes, that you managed to improve with some extra dialog.

BTW, thank you for making me realize how much I wanted Amber to crush my face with her belly.

I just loaded up an old, old save, got through a little cutscene about fucking with some conspiracy nuts and then got put into the wall in the dorm. (Edit: I can’t seem to find a version number for the old save, so let’s say “the first one, probably”) 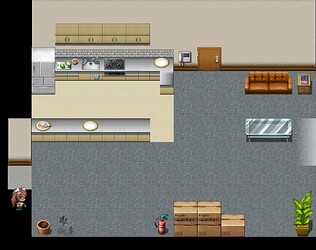 If this was a demo save it isn’t compatible with the full release. You need to start a new game. If you want to skip the section from the demo enter 8762 into the ATM.

Small bug to report. When you fight the slimes in front of Walkea, if you go back before the square where the fight triggers, it will trigger again when you go to the square again.