So, I spent some time playing in Axugaem 2 and I now have a few questions: 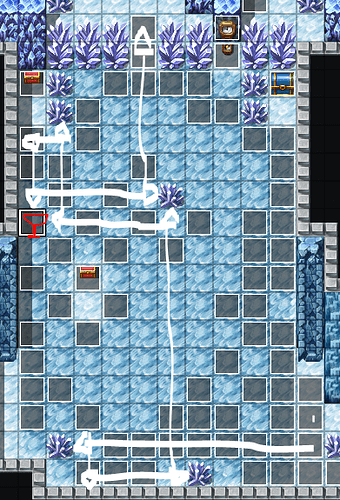 Thank you for solution

I’ve haven’t found anything in any of the outside walls of thundercrag. Can I get another clue please? (If you don’t mind giving it) 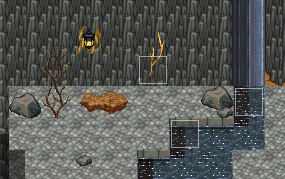 Thanks! I was really struggling

Everytime I try to accept the doll quest from Evelyn the game crashes and I get this message:

Noted. There seem to be a couple of incidents like that involving Evelyn after a certain point in the game. I’ll look into what’s causing them for next patch!

How do you enter the Del Nyan caves?

The entrance is on the right side of the Town Square map, right above the Mayor’s office and next to the graveyard. A neko guards it during the day, but after you’ve met the Mayor, you can head to the inn and rest so that it becomes night, at which point you’ll be able to get in.

am i playing this game wrong? i picked nell and as far as i’m aware none of my party members can heal aside from claire’s self heal. mixed in with the sparse healing items and it felt wildly difficult. i’d like to think im not terrible at rpgs, i’ve played though p5 on hard and i could normally at least see a path to victory. the start feels very difficult but the game seems very interesting so i want to figure it out lol

My recommendation until you complete the Costa Del Nyan segment is to use Clark as a pseudo-healer by having him steal constantly from as many enemies as possible (his damage output isn’t too important, and he can debuff at the start of a fight if needed). Most enemies will carry Surpris Fruits and/or Gold, which should give you a steady supply of items that you can then use for healing. Clark works well as an item-user in battle due to his reasonably high AGI, but Abby can also fill the role in a pinch, especially while in Goro stance. Once you complete the Del Nyan Caves segment, you’ll be given a healer character, which should make the rest of the game less steal-dependent. Hope that helps!

wich characters have perma wietgh gain and where do you activate it?

Abby, Vespa, Lani, Nell, and Cedric have permanent weight gain. Biri (the green snake) sells treats which, if you feed enough to Abby and Vespa respectively, will make those two characters fat. Lani gains weight from eating pies, which can be found scattered around the world and also sometimes in item form. She’s the only character currently who can gain multiple tiers of weight. Nell (and Vespa) gain weight from devouring enemies. They can learn to do this if you purchase the skill ticket for Devour from Biri and teach it to them. Finally, Cedric can gain weight late in the game if his approval rating is very high and you manage to get him hitched with a vampire neko in Del Nyan (you need Cross’s Whirlwind skill to access the location where this happens.)

it does! thank you so much!

The best advice I can give with the eating contests is to avoid hitting the very top of the bloat meter at all costs, as the three second penalty for doing so makes it exponentially tougher to win.
In practical terms, this means: button-mash until there’s just a sliver of red space left at the top, then turn around and do a large burp. Usually this will empty most of the bloat meter, though sometimes it won’t empty quite as much, so watch out for that (doing a small burp is an option in these cases). Finding a rhythm where you can get close to the top and then burp should help you spend the maximum amount of time eating, which should allow you to get a high enough score to beat each round!

and where do you get crocodon meat?