Calonia is a game, I am preparing currently. I’d like to share the idea of the game and would appreciate feedback a lot.

Earth is getting closer and closer to the sun, it’s a ticking time bomb until humanity will die when it gets too hot on the planet. A group of scientists has decided in cooperation with the world’s president (humanity was smart enough to choose a perfect leader for the world) to leave the planet to start an experiment with some test persons on a different planet and prepare humanity’s escape from earth.

On the flight to the target planet a critical accident happened and people had to escape with emergency spaceships. All you remember is a great explosion and the tremors inside your protection suite. When you wake up again, you find yourself in a small room with a bed, a lamp, a wardrobe and a refrigerator. A robot explains you what happened. You are on a different planet, currently located in a desert-like biome. Your spaceship was found broken somwhere in the desert and the robots brought you here. They are willing to let you live in their base, if you are willing to pay for your stay daily. The cost is a couple of Kalis. Having no idea what kind of currency Kalis are, you start finding out that Kalis are generated out of calories of digested food. It seems like robots cannot generate them on their own, but they are required to run them. You find out that Kalis not only are the main currency in this world, but also can be used like pure energy to heal wounds, attack enemies, etc.

With the goal to escape the planet and out of the robot center (without dying), you decide to start exploring everything first and building your powers. However, the production of Kalis seems to have an impact on your waistline.

In the following days and weeks I will be uploading the first graphics of the game (which will be from Daz studio, basically high-resolution graphics, photo-realistic). With the development of the game I will start shortly, not yet sure which game engine to use. I’m thinking of Unity, Ren’Py or a browser game with nodeJS backend, user accounts and online multiplayer.

Any thoughts, wishes, experiences, critics or suggestions to share?

It seems that you may have this set up to be also be a fighting in the game, somewhat, with the

piece of information here, which would be difficult to produce in a Ren’Py. It would be an interesting additional plot point, like protecting the machines from different enemies that assault the facility. Ultimately up to you, it was just an idea.

If you do end up making it an exploratory game, like you say here,

you decide to start exploring everything first and building your powers

either an RPG Maker game or even a Text Adventures game would suffice. If you’re still adamant about utilizing high resolution graphics, then I look forward to whatever program you want. It sounds like an interesting concept, and I can’t wait for the initial concept material.

question if the Kalis are taken do you lose the weight as well? if the weight had other benefits I could see having to balance the amount you spend and keep a interasting idea

This is promising. Just a question; will there be male option, or is this strictly female?

The consept is good. Hopefully the realizaion will be good as well

question if the Kalis are taken do you lose the weight as well? if the weight had other benefits I could see having to balance the amount you spend and keep a interasting idea

I cannot tell currently, it depends on how I decide to make the story look like. First I will create the required APIs to create the basics of the game, if I have them adding the story is more thinking about the choice than the work.

This is promising. Just a question; will there be male option, or is this strictly female?

Don’t see a point why adding male character sprites would be an issue, will just have to take a look on how to get the sprites. I’ve seen other creators use Daz3d, so I might do this as well, the assets are quite expensive though.

The consept is good. Hopefully the realizaion will be good as well

I’ve finished the first technical part. I’ve decided to stick with Ren’Py, so I develeoped a complete RPG engine the way I wanted it to be. This is what I’ve got for now, though textures will be replaced for sure. The black bars are just some debug information to make it easier to test things. They will be removed for the final game.

I’ve developed this map engine in a way that is no problem to have multiple maps/dimensions. This enables me to e.g. add a house and when you decide to enter the map changes to the interiors of the house. Additionally, I’ve added an engine to generate worlds randomly. I decide a set of tiles and the engine takes them and places them completely randomly. Though, I can choose to create maps without randomization as well (the interior of a house might make sense to be placed statically.

PS: The white fields should represent clouds and the blue tiles walls that cannot be passed

Basically all tiles will be white until they’re right next to the tile you are on. They will then appear blurred (and in greyscale, will add this for sure). If you visited tiles at least one time they will appear in full quality and color. The map will be in the middle of the screen. Below it there will be text, if characters are talking. To the left or right there will be a character window. On the top there will be stats (health, weight, money, etc.)

Will definetly go for Daz Studio.

Here is the first image for the main character: 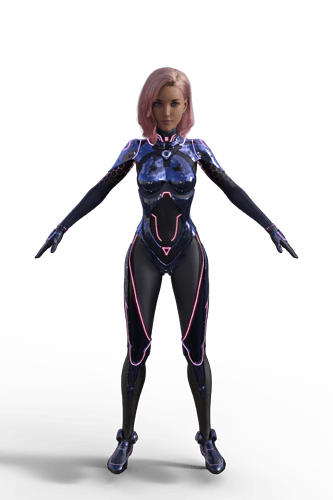 The plan is that the player is not able to wear clothing/armor not fitting her size. While some outfits might be more stretchy, other outfits are not. For example armor (like the starting armor I gave her in the image above) is not very stretchy but protects better than normal clothing.

Also I’ve decided to make the game more than just a fighting game. There will be quests to earn money and there will be jobs the player can do too to earn Caloris.

Regarding the money system I’ve decided to stick to following: Consuming calories will give the player Caloris (a wonder! Why is the currency even named this similar to calories? Must be a coincidense. And yes, I will stick to Caloris as currency name, I’ve updated it.). Calories are burnt over time, while Caloris are not. The player will be able to sell fat to machines who need the energy as source of energy and get rid of it. This also makes sense, since machines cannot eat food to produce the fat themself. However, fatness will slowly merge to the player. Fat that got merged to the player can not be sold or transfered. This way fat will give you an advantage short-time, however might be dangerous over a longer spans of time.

Lastly, I have decided to start a Patreon and give subscribers earlier access to new versions of the game, even though it is a pain to ask for money. I expect the first playable demo to be available in September, however there will not be a lot of things to do for now.

Completely forgot to put in my signature response. Sorry about that.