character types for games where getting big seems like a punishment

another thread went into this issue of getting fattened up as a punishment for getting hit/losing, but I wanted to talk about another solution rather than shifting a gameplay mechanic altogether: character archetypes.

what I mean by that is simple: various character types that shine at different weights!
for example, three easy ones are “strongest skinny”, “strongest chubby”, and “strongest fat”. of these three, I’m gonna talk about two stats mainly, strength and speed.

"strongest skinny" is simple, and what most platformers with weight gaining include: getting fatter is a detriment to your player. this character type would start the game with the most powerful attributes, the highest strength and speed right off the bat. the catch, however, is that getting fatter will gradually reduce these two stats, as you might guess. more weight makes you slower, and makes it tougher to hit harder. this follows the common formula of “avoid getting fat while most of the game will try to make you fatter” like the traditional formula of “avoid taking damage while the game tries to kill you.”

"strongest fat" is the opposite of this, shining while the player is very tubby. their strength would gradually increase with their weight, and their speed would drop off much less than the skinny archetype, as they are more accustomed to the extra blubber and use it to their advantage. the catch here would be gaining the weight, and depending on the rules of the game, not gaining too much weight. this would fall under the more common “berserker” character type, as they would essentially get stronger the more “damage” they take.

"strongest chubby" is the middle ground of the two, shining at a mid-range fatness. their strength would grow as they became heavy, but would drop off again slowly as they became overburdened. similarly with their speed, they would lose very little speed at first, but then would lose much more as they reached a weight too high for them.!

Here’s a rough idea of what I mean, illustrated in gorgeous MSpaint graph form. all three character types lose speed, but that just makes sense as they get fatter. the rat at which they lose speed is the difference, however. 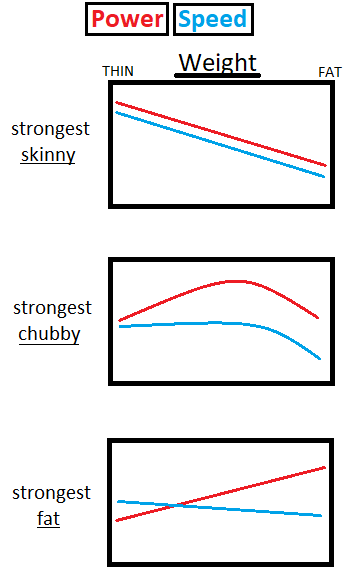 skinny is good early, gets harder as you get fatter. chubby gets stronger with chub, but has a limit of how fat they go before it gets tough, and fatty gets stronger as they grow, but you have to be careful you don’t make yourself immobile.

this was a much longer post than I expected, but lemme know what ya think.

I think this is a really good way of thinking about the problem, even if it did give me flashbacks to being taught economics in school (and then made me think of low, band, and high pass filters).

I think I’ve seen similar in tabletop RPGs, though just working off size and strength. As I recalll there was a mechanism such that smaller (faster) characters would benefit from choosing a pair of daggers as a weapon, a mid-range one would benefit from a variety of swords, and the hulk (slow) would be better off with a warhammer. The monster types factored in too: the hulk type would be ineffective against “swarm” enemies like rats and bees, while the small/fast one would be ineffective against giant foes.