When you are immobile, why is it a lot harder to rub the belly or at least constantly rub the belly? Is it supposed to be like that?

Does stacking “Enjoy the Moment” do anything? I can’t seem to tell but it has the option to stack so I was curious

I’m wondering if all of the badges are working as intended, for example I have never got any food from the belly rub badge and the one that gives you more experience from eating things one at a time seemed to stop working eventually.

How do you perform belly rubs? All I could do was hold the character in place by holding the left mouse button (regardless of mouse movement). Am I doing something wrong?

There are two white buttons on the bottom right of the screen. It’s hard to see because it’s white against the white carpet. The top one forces the camera to always face the character’s front, and the bottom one activates bellyrubs. After turning bellyrubs on, you just click on the character’s stomach and move the mouse around.

If you enter in a value for weight loss on a specific body part, and then backspace it, before entering 0 for general weight, then it causes the weight loss treatment to be free. It’s not just a display issue as far as I’m aware. I don’t lose happiness points. The weight is lost at least visually as well. I haven’t experimented with the exact conditions to recreate it because I stumbled on it by accident, but I can do some bug testing to get more specific conditions if you would like.

There’s already something way better than uranium pancakes and more caloric than whales in the game to serve as lategame food. I don’t know how cost effective it is when compared, but everything I said is basically useless now haha
If there happens to be more among the new 40+ foods then 0.5 might have solved it

Scribbles was 3 steps ahead all along and said nothing

speaking of the Weight Loss Clinic,

i wanted to give a bit of feedback on that matter. i get that the point is to stuff your characters as big as you can make them, and the weight loss clinic helps in lowering their size.

now… to be fair it would cost an insane amount of happiness point to go from a huge size and then suddenly think i want to revert back to the normal size (i was there before at some point, nearly costed 1 Mil happiness points)

but then i thought, if you need to spend points to lower their weight, then why even bother if it requires points to even get them to that weight? (you already spend those points on food anyway.)

shouldn’t it be the opposite? where lowering weight gives a refund?

from there i had this idea where their feeling towards weight comes into play.

for example if they were into it wouldn’t they feel bad to lose it? (little to no refund)
neutral wouldn’t really care (some refunds would be given)
and those that dislike it would be happy to have their normal weight again (can really give back a lot you put into it)

there could be something I’m missing here that makes this not viable, however that does give the weight loss clinic some merrit instead of wasting points. i can see it working as a dynamic piggy bank where by removing weight you’ll get some points back depending on how they feel about weight. it gives a incentive to still stuff your characters silly, but can be helpful if you need a bit extra for that one item in you want to buy but don’t have a lot of time to get there.

this whole thing has given me a brain blast of ideas but for the sake of not bombarding this channel with just that. i’ll leave it at this for now.

(never thought i’d get excited about an idea for losing weight, what is this, opposite day?)

Is there any way to remove Addiction? It’s kind of completely ruined the game for me, been four days in-game since I got it from the Monarch badge, and I haven’t been able to make my character eat anything or get any progress since the stores aren’t stocking any cake items. It won’t go away no matter what I do.

Switch to the belly rub mode by clicking the hand icon in the corner, then click and hold on your character’s belly until they stop moving, then you can rub their belly as much as you want.

I am loving this new update quite a bit so far with all the new features. One of the only things im a little disappointed by though is that the strong legs badge doesn’t allow for heightened mobility at any sizes above the first room. Im a person who loves seeing unbelievably humongous blob characters still be able to move around on their own, even if it makes no sense at all that they would. After going straight for this badge at the start when i saw it, i thought that it would allow me to see my character slowly waddle around in a bigger more open space, but alas twas not meant to be. I think it would be really cool though if you could have any of the characters still be able to move around in the city scape you have made and “accidentally” knock over buildings with their bulk. Considering there is already collision on the buildings this would be a perfect space to have that kind of interaction. Im sure there is a more technical reason though why at the moment you cant have any characters moving around at the bigger sizes and i understand if that is the case. Other than that though, this update has is a great addition to what was already a very solid idea.

Keep up the good work.

did you try un-equiping the badge? in the badge menu where you select badges there is also an option to remove it,(you won’t lose the badge, it goes back into the badge inventory) if that doesn’t work for this one then that’s a bug.

This update is great! Really love badges for both letting you tailor characters more to your specific tastes and for letting you cheat in some extra value from food now and then. And thanks to the mystery shop it feels like I have access to a much wider variety in diet than ever before, at least in the early game so far

It does make the grocery feel a bit obsolete though, if its not offering exactly what you want. A lot of people have already suggested ideas, but maybe there could be a tenth slot for a “requested item” or somesuch that lets the player target what they want? Wouldn’t even have to be specific, you could do them by categories like “Cake” or “Hip Buff” or “Massive Food” or what have you if you wanted to keep a degree of randomness to the shop

feed them until it says addiction satisficed

Found a bug, the masculine voice option still speaks in with a feminine voice, if i change the voice in the in-game closet, the bug still persists.

Loving the new update! Having a lot of fun with the badges, and having belly rubs return is awesome! It definitely adds more interactivity to the game!

Something I would love to see is more options for customizability, which there is already a lot to choose from, so it’s less of a concern, more of me trying to get closer to making some waifus

Something I thought about also while making characters would be a “Sweat” option, and maybe a tab where you can edit it? Not only that, but also adding the ability to color it, so if you theoretically wanted to make a slime girl or something along those lines you could color it’s sweat to make it look more as if the character was dripping? (The main reason I even thought about the concept at all was that second half) It could honestly just be a simple particle effect. IDK!!!

Altogether amazing work, and I’m very excited to see it continue to improve!!!

Does anyone know how many wobbs it takes to reach space? 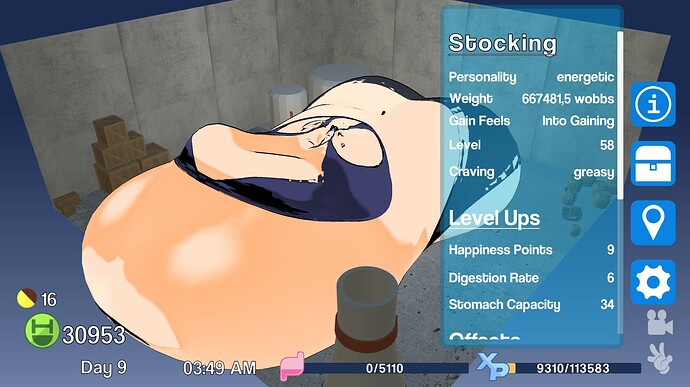