I mean in theory you can host the zip file on deviantart as a deviantart subscription premium item, yes? then in the description you just describe the game?

I think that’s how it’s meant to work. I know people sell like comics on deviantart premium/subscription whatever, it’s reasonably popular for artists. So, it must work somehow.

I tried to upload the zip file twice and it failed. Because of that, and only 1 person attempted to get it from there (who has a Mac computer so it doesn’t work for them anyways and the refund process is just such a pain compared to Patreon), I’ll just stick with Patreon. A bit of a bummer, but DeviantArt needs some more experience with it before I throw my name behind the service again.

I got in the habit of giving money to patreon/clips4sale/manyvids/etc. I know it’s not really fair to the sites in question. You’d think as a beloved site with tons of fans making the transition to paid content would be easy, but uh, it doesn’t work out that way somehow. Another good example is youtube, I’d never pay for anything on youtube because I’m used to going there for free content (while at the same time i’ve paid hulu/amazonprimevideo/netflix/crunchyroll all my cash in the past at some point or another.)

This is pretty cool I like the concept. I know you are going for a more linear style story element, but I would like to see (forgive me if this is planned and just not showcased with what was released) a bit more player agency. I like the dialogue differences within choices and the difference in tone if gives some of the actions and scenes within the (main/side?) routes. I did feel while the choices were varied and dialogue unique within said choices, that it felt a bit like regardless of what was said within the routes that the outcome was largely going to be the same (unless of course you outright ended a route or conversation).

I can see the plan for probably good, bad, and maybe even neutral ends for paths and I dig the idea of that but even if it’s just a few unique interactions or scenes outside of dialogue choices I think it would add to the route and make going back and replaying it for a different outcome more rewarding.

Either way I’m enjoying the demo, keep up the good work.

I think that feedback is perfectly fair. I have designed the gameplay to be rather linear with the storyline set in stone a bit more with the choices more “what type of reaction do you get” out of it.

I’m not at this time really looking to have various branching options, as that drastically increases the amount of work that goes into the project - but I really do like the idea of good/neutral/bad endings depending on what previous choices have been selected.

That’s something I might consider doing in the future (if I can figure out how to make it work with TyranoBuilder).

Hope to get more feedback on this project! 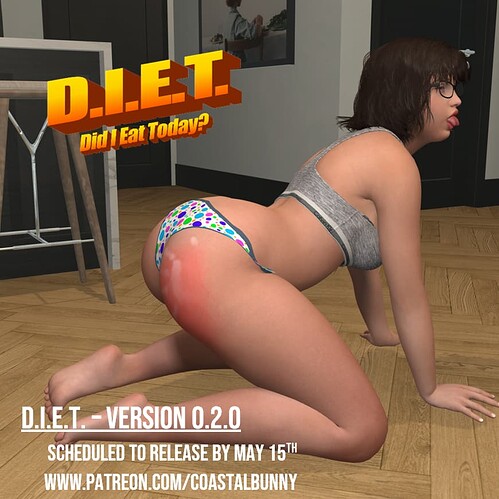 Appreciate the feedback! I actually had prepared a new “CB Connoisseur” tier in the past, but I completely forgot to publish it!

Yes, the $7 tier does in fact include the visual novel - it is the all encompassing tier.

I tried listing out the schedules as well as what is posted on those days within the specific tiers in order to reduce confusion to the options. Really though, I wish I could just organize the tiers how I see fit rather than by order of when I created them ha.

Love getting everyone’s feedback on the project!
Thank you all for the support!

This month’s update includes the main story line for the new girl Holly!
In total, there are 130 rendered images, backgrounds, and sprites total.
The script is also over 5,000 words!

My intention is to release version 0.1.0 for free whenever version 0.4.0 comes out, so about two months.

I don’t have any plans to keep providing free versions after that one is released though.

oh, btw, do you have a discord server?

Not at this time. I really don’t know what the purpose of a Discord server would be. How could I use it? 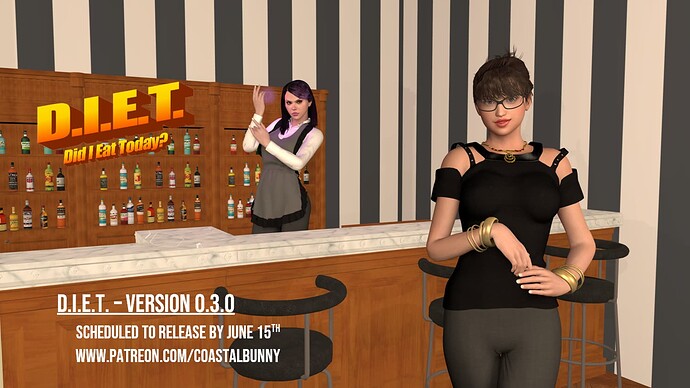 After that i might be sold for the other versions

This month’s update is Holly’s side story. Holly starts a new job at a restaurant with someone who may have some magic flowing through their veins…

As always, I hope to receive some good feedback!

Feel free to check out the demo version of the game here!

As a reminder, the game is currently on Version 0.3.0 with the next version scheduled to release by July 6th!