Normally you should be able to translate the dialog files without issue. Unless maybe if you’re using a non-latin alphabet, then the missing glyphs are probably getting replaced with ▯, is that the case? If so I can try to fix it by using another font that supports unicode, this way you won’t have to bother with custom fonts. I’ll look into it.

Also while I’m at it, if you’re translating the dialog files please make sure to make a backup of your modified files, I’d hate it if you lost your work following a version update. Also note that the dialog files are subject to change, so you may have to re-translate some parts in the future.

Are the baked good really that low calorie to pound?

unless i like typed something in wrong when calculating it then yeah. and i put all the values and equeations in the spreadsheet so you can fact check me if you feel like it

Huh. I guess this means I could do stuffing content with those instead?

Is anyone else having issues with the Omnimarket? Since updating to 0.7, it only shows a light blue rectangle on a black background for me. I need to load an older version to use the shop at all

nope. no issues for me

You said you were playing on Linux, right? I got myself a Steam Deck, so if I set up Game Maker on it I may be able to build for Linux. I can’t promise when because I’d need to buy a dock first, I don’t really see myself setting anything up on it without a mouse and keyboard, but that’s something I could look into in the future.

Thank you for remembering, I do. If you want to get the Deck and go through that for your own purposes, that’s fine. But if you want to just run Linux to compile, you can just download one of the countless free distributions like Linux Mint. It even allows you to boot from a USB drive if you don’t want to permanently install it. In any case, I would really appreciate the effort if you do decide to release for Linux

Got two things to report in v0.7.1, hopefully not already addressed.

First, when playing Not-Tetris with keyboard controls, pressing Up to rotate the piece sometimes rams your piece all the way to the left and locks it there, like the game thinks you’re holding down Left.

I’m away from home this week, but I’ll look into it once I’m back. Thanks for the report!

I don’t have much news to share, I’m still working on the new sprites and that’s taking most of my time.

But last week I went to my grand-parents, and found some old flash drives. On one of them, I found a screenshots of a previous, very old iteration of this project: 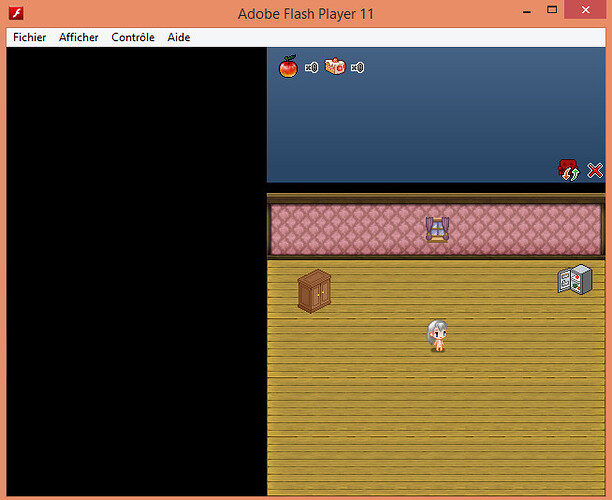 Judging by the other files that were on this drive, it was one of my first attempts. I haven’t found the project files themselves, but from what I remember it’s not a big loss ; I didn’t do much besides placing the few UI elements you see. I don’t think the character could even move.

It was fun to find this small ghost from the past and I though I’d share it.

Those sprites are just as important as everything else. I’m glad things are progressing smoothly