hmmm thats not bad of an idea

First off, I have been absolutely enamored with this game! I have been lurking on this forum for a while now, and I’ve finally worked up the guts (hehe) to make an account on here. It’s really awesome to see WG/ vore be expanded upon (haha) into a fully fledged world! That being said-
I’d love to contribute to the game with some bug reports I have encountered (for context, I am at phase 2 and taking the neutral path against GAIN and the cult, my party is overlevelled by about 10, and this is all starting on a my first playthrough)

Stopped being able to save progress after completing the Predatory Loans quest
“Is That a Penny?” skill will still show Phoebe’s portrait if used by another character, even after being eaten
Unable to use the same staircase to go back up to the surface as you used to go back underground

P.S. Thanks again for your time and I wish you the best on your projects!

I’ve joined the patreon and sent you a message there

Great game overall ! You have all my support

A character’s stats should describe them, but their skills should define them.

The customizable skill system you added to the game was a great addition;
it added more replay value with the freedom to customize your party however
it’s not perfect. I feel that the player should forced to make a trade off like how the survivor and all-out attacks skills are.
Somewhat like the pokemon nature system in which a stat would be raised by x, but another stat would be lowered by x.

Currently the game is physically oriented; an ego rebalance may be necessary

A major problem with the game right now, is most characters and moves feel the same because they suffer from a very limited skill set
since most moves are the similar but have a bigger multiplier. I suggest adding character specific passives to make them feel more distinguished from one another
for example, if Rachel had a passive skill that healed the party for 8%,but takes away 6% of Rachel’s hp if she has more health than 80% of max it would cement her as a healer that has manage hp to heal,
or if rumia had a passive skill that scales atk and E. atk off of her fullness but the fuller she is the slower she is; it would give her a more distinct identity from Kui and give digestol more uses.
I suggest looking to pokemon’s moves for inspiration like reversal or water spout; the move nurse is the most mechanically interesting ,move in the game because it provides the player a choice
“should I risk taking Rachel’s hp to heal or should I self-fondle and risk dying” In short, skills are a major part in gameplay and determines the game’s replay value.

I’m in love with this game! Can’t wait for the rest of it to come! It’s got a fun story with likeable characters and even some nice comedy in there! Of course, it’s sexy as heck too! Keep up the great work!

I’ve kinda recruited rachel and then talked to Grace. Now I’m not entirely sure what to do next. 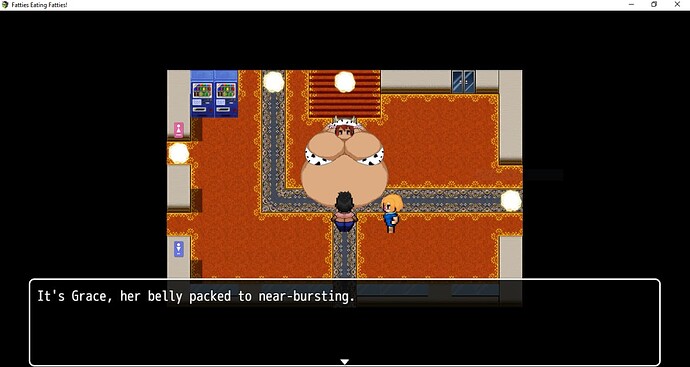 I did some testing with certain skills and they don’t work:
Pred heal, feed pizza, enquicken, Miss-show off, Gravity ( one of the fat demons’ moves)

using the milking machine in battle does nothing

you can skip the first Bertha encounter; there’s one tile at the bottom that doesn’t trigger the fight

I did some more testing with the bus stops and each menu option has a set place to send you if you exit with x [Downtown takes you to Downtown(Uptown), East takes you to Expa HQ, and West lets you skip the sleeping fatty and go to the beach early.] exiting the bust stop normally just softlocks the game

You can skip talking to Sheila and have two Sheilas on screen, one Npc and one party member, in front of the Ham.

This is subject to change: 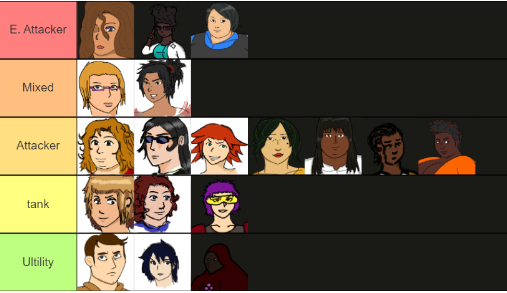