Who’s that pokemon?
It’s me!
After months of messing around, here’s version 0.4!
WHAT’S NEW:

UPDATE: Bugfixes! Mercy points now function correctly, Jeff’s skills have been tweaked slightly, some text cut-off has been addressed, the Unfed Item should now potentially lower your stamina… Also, messiness involving Rachel’s miniquest (with her potentially rejoining the party while she’s still in it, among other things) should be addressed. Charity should eat the correct person when prompted.
Lastly, logic preventing the player from having mutually exclusive characters has been added, and the
HP of most Phase 2 enemies has been reduced in some capacity.

If you like this, consider throwing me some change; I try to update weekly with some art, musings on design, and complaints.

Herokero is creating some kind of kink game thing | Patreon

Become a patron of Herokero today: Get access to exclusive content and experiences on the world’s largest membership platform for artists and creators.

This is the original interactive, never mind the 2.0 moniker Fatties Eating Fatties.

Most of the eventual ‘episodes’ will be from there, so if you wanna SPOIL stuff feel free to navigate the nightmare that is writingdotcom. Hell, you could even add to it!

I gotta get something out here before i even play the game:
FINALLY
A VORE GAME WITH WEIGHT GAIN
GODSPEED MY DUDE

Otherwise, I liked it, keep up the good work

Oh wow. I didnt expect to inspire anyone

another testament to how awesome this community is.

You know, I’m always confused when vore doesn’t contain weight gain, and I’m glad you have made one that at will.

The fat fairy doesn’t seem to actually offer any items? Unless I missed something.
The locked door with the person saying “go away”, is there a way to gain access?
If you eat one of the roommates, it locks the dialogue with Grace’s mother and Grace.
When Grace and her mother are having an argument, grace’s mother is still downstairs.
Some text is cut off (although that’s super minor)

Other than that, a bit of music and some sound effects would really make shine.

Definitely enjoyed it though. and honestly, i like the art. It’s got a cute feel to it. Better than anything i could manage.

Excited for the next instalment. I need to eat more

This is a good idea and I love the idea that if you eat someone it locks your choice but it needs some work.

My main complaint is that I don’t really want to name characters. I’m awful at names. Maybe it’d help if they had something unique as the default?

I’ve been enjoying my time with the game so far- nice to have a MC willing to gain with hedonistic abandon! One odd bug I found was when I hit WC 25 it finally upped my status to “fatty” (without a descriptive message, mind) but it also plummeted my WC back down to 16 and froze out some abilities.

image1635×656 266 KB
Is this correct, or is it bugged/not fully implemented yet? I note the sprite hadn’t changed either so I suspect it’s the latter.

Also I tried tackling the mum on the ground floor but although I was able to hold my own thanks to Hip Check and Self-Fondle, the fight seemed to keep going and after 10 minutes of continually bashing her I grew impatient and threw in the towel. Is she actually beatable?

Edit: What I mean by freezing of abilities, I can no longer do the ‘Eat’ or ‘Physical’ actions in combat anymore. 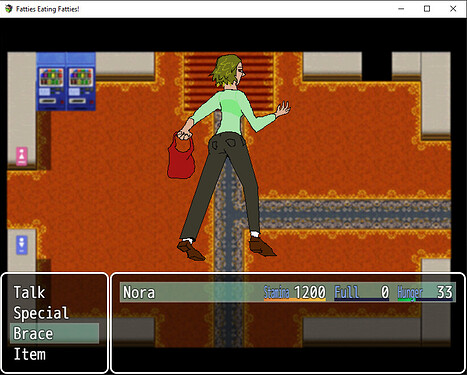 Thanks for the input and encouragement everyone! And sorry about any bad experiences you may have had with it, I’m super new at this thing. Will try to respond to everyone’s points… NOW

@Riverking1, @AlexKay : There is definitely some unfinished jank in the class-upgrade system. Thus far there’s only the second-tier conceptualized, but I guess I forgot to turn off the hooks for tier three. And the way I made the exp system seems to have either broken at that level, or more hopefully, works correctly, and I just forgot to account for something.

@NickSav : The way I’m planning this, which is perhaps incredibly stupid and prone to feature-creep, is a ‘systems-complete’ section at a time. Which means, of course, any systems that might be game-wide need to be already completed… or I got frustrated/impatient and moved on. The fat fairy is the latter; she’ll have stuff EVENTUALLY, but I need to make some more progress elsewhere before I can give her said stuff.

RE: the locked door: that’s more just a hook for me to possibly come back to. Might be a quest NPC, might be a red herring.

RE: SE and music: I normally play these things muted with other music playing, so it seemed less of a priority. But I can see how others might prefer otherwise.

Back @Riverking1 : the cracks people “should” be working–with the outcome thus far of Kristen knows of Marissa, player eats Kristen (and pisses off/eats Marissa), or neutral state. Can you be more specific? As for the pink-haired lady, that’s a hook/hint for a future questline. And sorry about the naming thing! Will look into that.

@AlexKay The mom is purely the Bad End if you fight her, I actually didn’t think you’d tough it out! I’m so sorry you wasted all that time :(. She’s unbeatable, but that was implemented when I had a functioning health bar plugin. But it didn’t like being encrypted, and then it just broke! So I’ll look into that.

And thanks for pointing out grace’s mom being sneaky and sticking around! Can’t believe I missed that somehow.

I keep seeing ‘new’ when I test it out and it drives me mad. Will definitely add something for the main character, although I might leave the roommate’s default name as ‘roommate’ 'cuz i find it funnier that way.

Ah that makes sense. I do the same thing. Try to get mechanics done and dusted before going onto any mapmaking or eventing. Although, word of advice, it does make you backtrack alot to ensure you don’t break things you made previously.

See I was here thinking if I got big enough, you just bust the door down and pull a Grace.

Normally I do too, but having the option for it is nice. It’s a little eerie otherwise.

I also did the non-stop fight with Grace’s mum, mostly to actually eat her. But nothing happened. (Hopefully something gets added in future, that would be cool. Sort of worth power grinding to try win)

How are people feeling the exp system? I’m not a huge fan of how… grindy it gets as you approach tier 2.

Dude, just thinking of this thing—all of the friggin stuff to be made and re-made… It’s so goddamn intimidating. And of course all I can think about is endgame shit…

Breaking-in is actually planned for later, just not that room in particular. But maybe…

Also, as one maker to another, I’m sorry for making this and ‘stealing’ some of your ideas! I kept thinking of things I could suggest for your game, and then thinking, “geez, I sure am an ass for suggesting all of this work someone else should do.” Which ultimately led to… this!

Relatedly, I THINK i figured out how you made the ‘too full’ failure state, and will be adding that to mine next content update, hope that’s okay. ‘Endless eating’ is fun, but it kinda limits what puzzles I can do. Well, ‘puzzles’ anyway.

@NickSav What did you mean when you said “eat one of the roommates, locks the dialogue with grace and her mom”?

Having reviewed the events, I’m not seeing a lock, exactly. The possible outcomes between the three of them (Rachel, Grace, Charity) are:

regardless, I’ve cleaned up that particular page, now there’s no conditional; Charity’ll just appear at the end of that convo sequence and kick you out.

@Riverking1 I’ve fixed the roommate name thing; turns out I should read what ‘initialize’ does.

still not certain about the rachel digestion thing, but maybe it’ll show up when i get more involved with the class stuff.

In any case, it’s heartening to see you actively addressing these issues, @herokero. Gives me assurance that this game has the potential to go far!

So, I may have missed something, highly likely I did. But thought I’d mention it anyways,

When you go to the penthouse, once you talk to Rachel for the first time, you can then interact with Lauren.

You can pick her up, or eat her or nothing.

If you pick her up and take her to Rachel it’s all fine.
But if you eat, Rachel simply repeats the dialogue over and over.
And since charity I’m guessing is looking for “Rachel in the party” the dialogue never changes.

Although there’s a high chance there’s another work around and I missed it.

The exp system was fine. A tad grindy yes but not too difficult to manage. Thankfully the fat milk gives you more fullness as you level up, since it’s based on a % rather than a flat number.

Also the too full failure state is just a conditional common event that is running parallel on every page.

Since your using MP though it may be a bit harder. Since I don’t think you can exceed the maximum in rpg maker MV.

Ah, I see what you mean now. I suppose, having tried to make the actual NPCs be generally reactive to your actions, to let Rachel just be in her loop if you eat Lauren seems broken. And that’s a good point, I’ll add something in.