Fill Me Up (Formally "Untitled renpy feedee game") Newest version in the OP!

Okay so this took forever and a half to get together, but it’s here with a new title “Fill Me Up” (Formally “Untitled renpy feedee game”. A lot of hard work went into this and I hope everyone finds at least something they enjoy.

Download Links to the Latest Version: (It looks like the file gained a little weight since last time.)
Feel free to share these files wherever. Not everyone who’s into this kind of stuff comes here.

Mega PC: Fill Me Up PC

Mega Mac:Fill Me Up Mac

I believe I have squashed all the bugs, time paradoxes and broken videos, but if you find something that’s broken I’ll be on standby today to sort it out ASAP.

If you enjoyed the game would like access to the latest version as soon as it is available. Please consider supporting me on Patreon. (There’s only a poll here at the moment!)
Support me on Patreon

I will try to keep the patreon version two versions ahead of the free version, I honestly don’t feel particulary proud of having one in the first place.

Don’t feel obligated to pledge, but I very much appreciate the support. The work that went into what I’ve made so far has been pretty herculean. 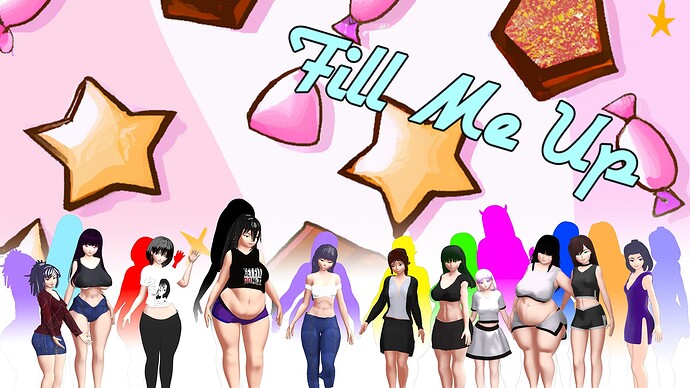 Premise: If you haven’t already played it. You are Akane, a freshman at university who moves in with two others. You quickly find out one of your roommates has a bad relationship with food and it begins to rub off on you.
How will you handle this situation and can you get to the end of this version with your self control in tact?

In this update I’ve added:

A bunch of new characters each with their own narratives and storylines. (Mostly incomplete but will be updated with time) 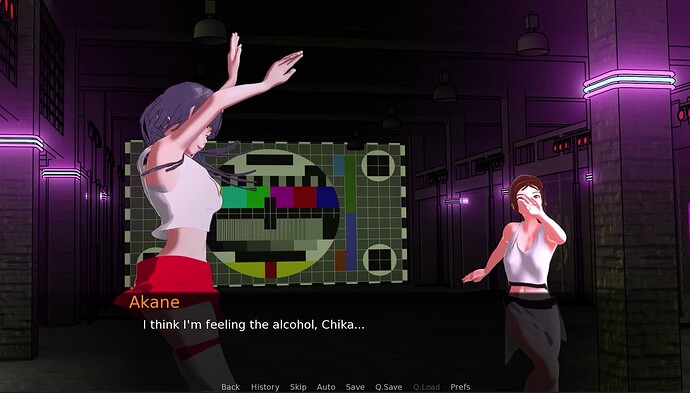 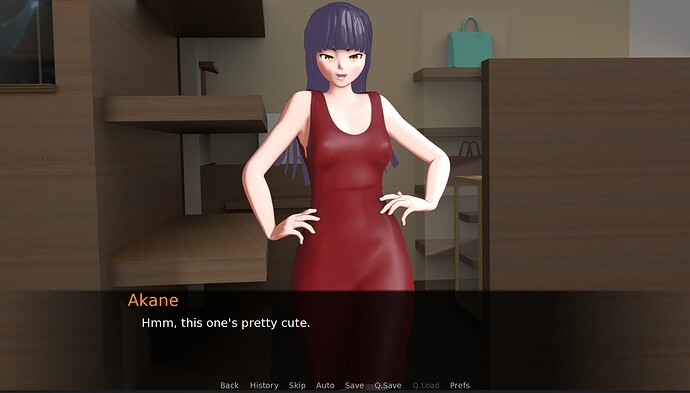 A few more activites and places to visit with new means to test your self control! (Including a park which is obligatory in the genre for some reason) 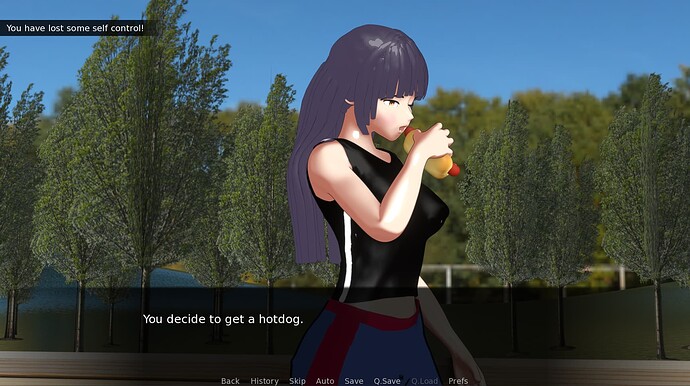 Be warned there is some mild slob in this update.

In the next update: I hope to add the promised university scenes and her inevitable downfall. (I honestly keep forgetting that Akane is supposed to go to university.) and make some explorable areas with hidden surprises.

Only just booting up the game now but it looks really good!

I think you did a great job blending the 3D models with their respective art style. You’re taking something that’s been done on this site and making it your own. Very unique and pulled off really well!!

Can’t wait to see what comes next. Keep at it!

Trying your game right now!
So far it seem nice and rather well done, but I found some bugs (for now):

I found a bug, in certain point of the game going to the gym with erika don’t waste time so you have to click on wait constantly to make time go on

Best VN out there. Keep it up!

Excellent start! Can’t wait to see where it goes.

I think the randomness of the days is triggered when you hang out with Chika, the implication being you got black out drunk and slept for a day.

gosh i was litteraly my favorite wg game for now. It’s just what i like.
Even if their was a probleme at the point you get burger after the training the time stopped each time i trained as long as i trained i would get stuck at morning and was obligated to tap WAIT.
Overall my favorite game for now liked the image.
Even if (on my own preference) i would have liked to be able to train alone to see her having an hard time training also could be good to be able to loose weight to make the feeder (forgot her name) a bit more agressive.
Also can’t wait for u to put in the school with the score mark getting lower and lower.
Well as i said it was REALLY GOOD can’t wait to see more.
Can’t wait to buy the game!!!
I will follow you a lot (on the dev of the game) .

Great game, however there is some bugs like time not going forward after some activities, and also i kinda miss an option to feed or eat, so you can gain more weight,
The events perhaps should be more freccuent

Given what the game is like so far, mutual gaining would be a great addition to this.

Really enjoyed what the game has to offer so far, especially the whole role reversal idea. The models are also really nice, and I personally much prefer this kind of style over the typical 3D models people are usually using in their visual novels on this site. I’m excited to see where the game goes in the future.

Very promising, i think it has a lot of potential if it refined and expanded upon more. I especially like the arstyle

It’s a very feedee and role reversal heavy game, but if there is interest, I do intend to add feeder routes and anything else that might be interesting. So if there’s something you’d like to see. Let me know.

First off, welcome @bobothesecondtwo. This seems cool it’s unique. The girls’ models look cute and it’s an interesting concept. I know MC feedee doesn’t appeal to me personally, but it is a rarer concept. I’ll be looking forward to some feeder options and pathway for the MC if that happens to get added.

I like the variation you have going into this there’s a good amount of more random things that can happen with the limited options to do during the day and evening, so that is nice to see. Obviously, the game would benefit from having more to do and keeping the variation up within those options would be good in my opinion. I look forward to seeing where you take this, I think you have a good foundation for something here.

This project is a lot better than you give it credit for, I hope to see great things out of this game

The game is good and the idea is funny with a slow burn weight gain at first but the random day are throwing me for a loop it will go from Sunday to Tuesday or something it will just skip the weekend.

Wow, I feel like that was a lot of downloads in a very short amount of time.

I’m glad to hear of the positive feedback. That lets me know there’s a point to continuing developing this game.
There’s a lot of posts here I want to reply to but I’m phone posting right now so I’ll try and sum up without quoting.

Firstly apologies for the bugs. Especially time not jumping when training past stage two. I thought I squashed it, but evidently not.
I’m not sure why some days are skipped. Sunday = 0 and Saturday = 6.
If the day of the week = six when you go to bed, it should go back to 0. Unless I forgot to put that in somewhere. I’ll check it out.

I like the idea of the MC being punished for trying harder at the gym. Having their lifestyle take a toll on everything around them. I will definitely to adding more of that to the feeder route.
Someone mentioned mutual gaining. That’s definitely in the plan too. There is a value in the script that calls for Erika to rebound it you feed her back enough times during stage three.
Lastly I also planned for a pure feeder route that would start early in the game should you be able to control yourself and attend the gym enough without giving in to any temptations.

All these ideas increase the complexity though. I need time to make it work.

Right now I plan to focus on padding out the earlier parts of the game with more stuff to do. Give the MC reasons to partake in certain events to move on to others. Make it more fun to explore the options.
I also want more super rare random events to catch the player off guard.
I should also run some Photoshop magic over some scenes. The club looks nothing like a club, but a dark corner. Which it is.

The models in their current state can get WAY bigger, but I’m in no rush to get that point just yet. Editing the shape key on a model feels hollow without the narrative backing behind it.

If you guys have any more specific ideas, especially one off events or scenes which can be sprinkled throughout the game, please share them.

Did you guys get both dream sequences? I might have made them too rare.

Anyway glad to know you guys liked the game so far. There’s a lot I want to add.

I saw both dream sequences, but it wasn’t until later in the game when they probably shouldn’t have happened. In other words they triggered really late for some reason.

I figured as much. They were supposed to be rare scenes with a 1 in 30 chance of occurring when you sleep.
The character gains way to fast at the moment to take advantage of that so I’m probably better off having them trigger at a set weight in future

For me I saw the weight swapper once every weight stage. And the Size exchanger only at stage three, twice. However, I was not trying to pick every greedy choice and was trying to explore around options before I knew what content was in the game. It would make more sense for them to probably be static the first trigger and then maybe be a rare repeat if you intended them to be view multiple times. Especially if you plan to have them vary on size or any other factors.