Fill Me Up (Formally "Untitled renpy feedee game") Newest version in the OP!

Cupcakes that are several thousands of calories is grounded in reality?

More grounded in reality then suddenly magic and furries popping up. Thanksfully that is not the case so far and I hope it stays that way.

Btw, going to the restaurant doesn’t actually increase the weight. I think the $ Akane.weight += 6 needs to be done before call advancetime from _call_advancetime_37 (same for the other scenes there). When I do that the weight gets counted. On the other hand it seems harder to even see scene restaurant0104c where you see her actually finish both burger and fries.

Right now the game does suffer a bit from the overload of characters that seem to be introduced a bit abruptly.

I can’t help it. I just love making new characters. I had a one activity, one set of minor characters policy, but going forward I’ll keep the cast where it is and work on what I’ve got. After the next update, I intend to hone in on various characters and make updates focused on them so the player has the motivation to hone in on one or two… or three characters and see where it goes.
In particular Chika needs a heavy rework, but I’ll need time to focus on that.
I’ve got to take a good look at the code and how events are played. The aim was to have doing repedetive events be at least a little bit more interesting. I think a good solution was provided.

@Testin10
You’ve made your wishes perfectly clear. Don’t worry she’s completely optional and will probably be able to be switched off from the start. For the time being she exists for a side story for some side characters and is more there for players to have fun after they’ve exhausted the main content of the game. It’s not a poochie the dog situation, I swear.
Also I’ll take a look at the restuarant code!

In the meantime. People have been asking me how massive Akane can get. I’ve done some reworking with her model and I’m pretty happy withn the results. Obviously not going to post pictures here because half the fun is seeing it by suprise in game, but I don’t know of any 3D type renpy game with a character this massive. Absolutely huge. People are definitely going to have fun getting there.

You don’t need to explain your development approach to me. I am truly amazed by how much you have got done so far. I’ve signed up for your patron to show my support. Take my commentary as much as a grain of salt. I look forward to being surprised by your next iteration.

I’ll keep trying to do my best!

In the meantime. People have been asking me how massive Akane can get. I’ve done some reworking with her model and I’m pretty happy withn the results. Obviously not going to post pictures here because half the fun is seeing it by suprise in game, but I don’t know of any 3D type renpy game with a character this massive. Absolutely huge. People are definitely going to have fun getting there.

I have two gif reaction images for this statement. The first is my questioning of this line “I don’t know of any 3D type renpy game with a character this massive. Absolutely huge.”

The second is my pleased reaction to this statement and representive of my eagerness to see this play out.

Hype level is off the charts! Cannot wait!

Out of curiosity, what is the biggest you know?

I was more referring to the term “absolutely huge”, as I know everyone has a different opinion on just what that is exactly

I can say I haven’t seen anything even remotely close to what I would consider “absolutely huge” is, but I am eager to have one come along and meet that expectation.

I guess from memory the biggest I’ve seen in a 3D renpy game might be Queendom of Corpula, but while it is definetly “huge” it isn’t what I would classify as “absolutely huge”

I would also like to answer this, certainly i would say Project F.A.T characters and final boss on the RPG Maker side of things, text game side Gaining Perspective (seriously you get you have to get upto 3000 lbs to get one of the two endings) as for VN Weighted Game main romance option.

And while i would love to see these characters to get just really big aswell as find it kind of amazing if you somehow got one of these characters or even perhaps Akane herself getting to the point that she’s so big that she becomes Immobile but i doubt it will happen due how 3D Model were never designed to got up to those kind of weights however i do hope the perhaps a few of characters (including hopefully Akane even out weighing fat Erika somehow) getting serious mobility restricting 500-600+ lbs but i am perhaps been a bit optimistic here by typing this but i willing to perhaps be proved wrong this time just to see it happen.

There is a huge difference between 1k kcal and 10k kcal, as is the case in the game

When you said that akane could get massive, is there any plans to make a feeder route where other characters get massive and akane stays fit or even gets buff?

It’s absolutely on the list of things to do. Not sure when I’ll work on it just yet though.

haha nice, also, great game probably my favorite from the site, the characters and the art are awesome.

Just a thing I want to check in about @bobothesecondtwo, what would be the best way to offer suggestions?
I’ve got a few that shouldn’t be that hard to implement and I think would help the game structure massively. Let me know.

Feel free to either DM me or throw them out here. I’m pretty relaxed about it. Just be aware there’s a mountain of stuff being suggested right now so I can’t promise to be expedient about putting it in.

edit, forgot a “t” after can

Working on some activties to take people out to lunch etc. 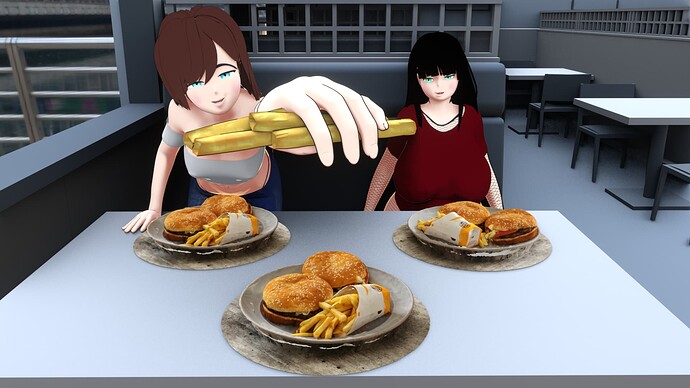 What the restaurant staff see. 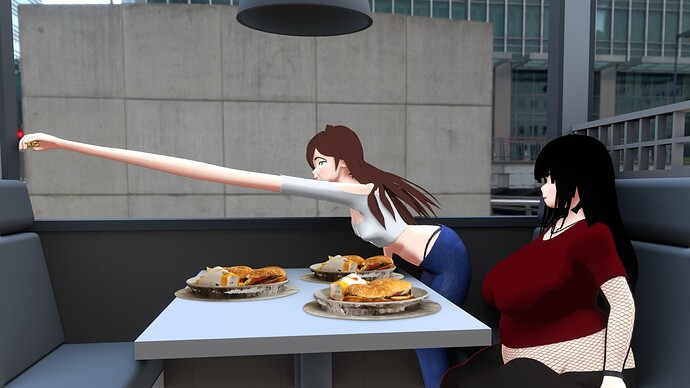 cool and i see Lisa is doing her best Mr fantastic act for the staff to boot.

Yeah the file is getting a bit big. I’ll need to look at ways to fix that. For the next update I’m using some more efficient file types for some images.
Hopefully I can get everything together in time!