@Tron
Huge congratulations to you and the team. I’ve been a fan of Forks for a long time — this is the third release version I’ve played. It’s been my favorite wg game since the first playthrough, but it wasn’t until this revision that I really started to appreciate the scope and ambition of what you’re creating here.

(My apologies for the unsolicited feedback to come… I really hate receiving that sort of thing myself so I debated simply sending you a DM — but you seem to do a great job in this thread taking it in stride, so I put it in spoiler tags instead.)

Most narrative video games driven by player choice — especially visual novels and dating sims, but also RPGs (think Mass Effect) — make the Player Character more or less a cipher. The PC doesn’t feature a whole lot of personality beyond maybe a couple defining tics and quirks, which helps them remain relatable as an avatar for the player. This also makes it so the PC isn’t actually the protagonist of the story; instead, in dating sims, it’s usually the romance options who each face the primary story conflicts.

But you’re doing something different and really awesome by putting Alex and her conflicts — of gaining weight, accepting herself and her fetish, facing the disapproval of others, and finding friends and community in college — in the center of every plot. That’s a whole lot harder than writing mostly discrete stories for each side character, but it has a really awesome potential for storytelling, too. In this release I’m starting to see signs of how following the different paths for Hannah, Rea, and Grace change not just what happens to Alex, but also how she changes as she handles theses conflicts in her life.

The other thing I think you’re doing really differently from other games is by continuing to consider the relationships between your secondary characters throughout all of the different pathways. For example, both Hannah and Rea’s paths hinge on the conflict between the two of them, and I wouldn’t be at all surprised to see one or both of their arcs eventually involve the option to see the two of them reconcile — as friends, if not lovers.

The sum effect of these writing touches makes this VN feel more novelistic than game-like, which I think is really cool. In fact, I’m wondering if you can play into that distinction a little more — perhaps before player choices, we can get a little bit more monologue from Alex explaining why she’s considering each option. It would make it feel more like a genuine character decision than the player simply picking story outcomes from a menu.

One last nitpicky note: another commenter above mentioned that they had a hard time understanding how much time passed between scenes, and I had the same feedback. The same fade to black transition is used to pass between scenes during the same day and to transition between different days. I eventually figured out that the journal would be updated with Alex’s weight most times there was a new day but that seems like a clumsy solution. Maybe it’s as simple as adding a text box with the date whenever the day changes. You could even put her weight there too, to make the journal feel more like a historical record and less like a game mechanic.

Hey, everyone! Hope you’re all doing well, I’m trying to squeeze in an update while the kid’s napping

Thank you so much for the kind words and helpful critique, for as much script as I write it can still be difficult to find the words to express my gratitude to everyone who’s taken the time to give Forks a try over the years. I promise I’ll continue to try and improve to make what comes next even better!

To that end, I absolutely need to better distinguish dates and the general passage of time; players shouldn’t have to keep checking the phone just to see what day it is. I may have to just use a general text box (as I don’t currently know what it would take to add a nicely animated calendar transition effect), but at least that’d be something.

Also, you’re right that I need to keep better track of what info’s given behind the scenes. In my mind, I’ve always thought Grace is able to learn/infer about Alex’s gaining no matter which route she’s on. I’ve been working with these characters for so long that I’ll accidentally assume the readers knows as much as I do, and that’s a bad habit

Whew, glad I could pipe in. I always try to take feedback in stride because I started these projects knowing nothing about writing, and more often than not people make great points! Points that other potential devs might get a chance to see and learn from as well.

Hey since Arias assets are getting chucked into the trash, will they be posted on the team spoon or toro’s patreon?

Aria the game is getting scrapped or just certain assets?

Most of the assets were already posted there or are included within the 1.0 demo, anything else wouldn’t be too interesting. We did a lot of sketch concepts that are buried in Discord, and some spoiler-y things that we’ll carry over into Aria 2.0. The first three parts of Rena’s TF sequence were posted in the Patreon already and that’s the one we were happiest with, Toro learned a bunch doing it. Maybe I’ll post some comparisons once they’re ready to show off in Patreon. 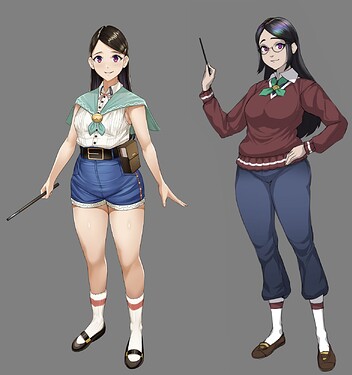 @Fat_Belly Aria’s not getting scrapped, but it’s getting heavily retooled. Much like Forks did.
New art style, new scenario, but same core. I’ve gone over it on Patreon, but the original “magical school” idea, while sounding good in theory and in Fork’s wheelhouse, just didn’t pan out. I realized just how much more I needed to learn to pull a game of its scale off.

Ok thank you for clarifying. Really appreciate both projects yall are doing.

Hey, mostly because I’m an idiot - is there still a download link for Aria?

It’s pretty crazy to me that Aria has existed since December of 2020 and still the only place to talk about it on the forum is in this thread. I’m still not sure why with the amount it has been mentioned here and the fact that it has a proof-of-concept demo that it doesn’t have its own thread by now.

I think the February 19th post is the most recent public demo. (If I remember correctly the game is far different now and going to be on unity since renpy has issues with what the team is trying to accomplish, but it’s still there the link has been working and not in the past so unsure if you can actual still download it.)

Thanks! But the link on that site is still down, yeah.

Ah I would assume that’s intentional by now I guess. I guess the unity demo will be the working version when that comes out at some point.

I know this is a bit late, but goddamn do I love the update. It made me enjoy hannah’s character way more than I thought I would as well as provide really neat ideas for storylines in general. I really can’t wait to see where it goes from here. Any ideas on which character is going to be focused on next update-wise?

Supposedly it’s Grace’s update next. If this is true, then count me as one of the most excited people here

Oh yeah, her current arc seems… interesting and I cant wait to see where it goes. Id also like to learn more about her sister too considering the tease we get in hannah’s route so far.