Girthbound is a mod of Earthbound featuring original characters from the fat fur community.
The objective of this mod is to eventually replace all human characters with furry ocs! While enough content is there for a complete experience, it is still a work in progress! 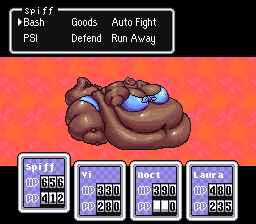 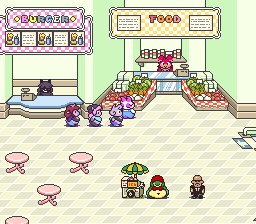 Disclaimer: While this hack is for a community that shares a common fetish, it does not contain any sexually explicit material. All original characters are above the age of 18. Dialogue has been altered to ensure they are of appropriate age. Unchanged characters will not have any interactions that would be considered inappropriate.

PS: While instructions are provided, you are expected to carry a basic understanding of emulation to play this mod successfully.

I have no idea what earthbound is, but this looks pretty amazing!

everything has cheats if you’re willing to experiment trial and error style, for example just use cheat engine

Earthbound isn’t that difficult, it just asks the player to be competent and not play like an idiot. Judging by OP’s post, this mod should be a lot easier than the base game anyway.

I agree, it’s more enjoyable to have unique characters and you don’t need to make it fit into a pre-established lore and can make it entirely unique.

Trust me, Earthbound is pretty easy. You just need to have decent reflexes and good menu item selection.

Always wanted to try out earthbound. Looks like I finally have an excuse to play it!

@Errornulll
Well, honestly, it’d probably be better to start with the vanilla game, it’s not really that long nor that hard (besides maybe Onett, I’d suggest grinding to around level 5 before fighting any of Frank’s gang members, they wear all black on the overworld). An average player could probably knock it out in… Say, 30 hours of gameplay at the most, and that can easily come down if you use Fast text and are following a guide/know the story.

I’ll probably be fine. Worst case scenario: I lack a tiny bit of context. Either way, I’ve always made sure to over level when playing these kind of games anyways. Heck, I make sure I have at least one level 90 before fighting the elite four. Either way, I’m going to enjoy it anyways. There’s something about these kind of mods that I just can’t seem to resist. Whether it’s the alteration of a world’s lore, or the minor changes to the gameplay, I’m not sure.

Oh, and First few seconds in the game, and I already find my favorite item. Bread!

It’s nice to see this on the forums! I saw this on FA a while ago and tried it out back then, it looks like a lot more stuff’s been added. I’ll definitely be playing it again!

Hey Hey! play bit of the mod! won’t lie I having waay to much fun and love the spirits too! only down side is I kind of understand gut but not whole things.

In this mod I made everyone’s Guts stat way higher. Because they got big bellies, or a large ‘gut’ so to speak.

I’m having plenty of fun so far, really enjoying the fatty sprites I’ve seen so far (I’ve only recently beaten Frank). I’m guessing the fat related stuff happens a bit later in the game. My only issue is that I am unfamiliar with Earthbound in terms of what I need to do, so my only complaint is due to my own fault.

Really enjoying this hack! I’m a few hours in - just got to the second town. The cool thing about the Mother games is that they’re so weird already that the added fat content doesn’t even feel out of place, imo. Also, love the menu color choices <3

I am curious if this has any weight gain, or just makes characters fat. I cannot find that anywhere and I am quite curious.

In every town there is a Hint Guy who can give you a hint on what to do next for a fee.
Generally speaking if you cannot go to the next area, there’s usually a different path to go down that will lead you to a dungeon. Your main objective is to defeat all the Sanctuary Guardians to learn the 8 melodies.
Because you singlehandedly ended gang violence, you helped out the town a great deal! Perhaps the mayor owes you a favor…