So I was playing a game called Godville. For those who don’t know, it’s an idle game for mobile or for desktop where you play a god or goddess who has a hero or heroine that travels the world and does quests and stuff. You know, pretty run-of-the-mill questing and being a powerful deity stuff, right? What sets this apart from other adventuring or idle games is mostly its humor. Plus, all of the gods and goddesses who play the game are welcome to submit ideas to the creators for quests, diary entries, enemies, etc. and if the devs like it enough, they implement it into the game. Well, first the community decides if they like it, then devs get the final word. Here’s roughly what it looks like, minus a little cut off the top and bottom: 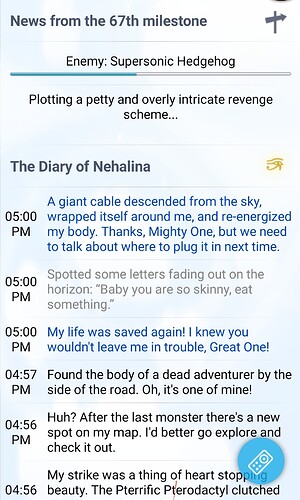 20200311_1703491078×225 88.4 KB
Now, unfortunately, this game doesn’t have any text for gaining or losing weight that I’ve seen, nor does it have any visuals to represent this. However, the bright side of that is that you’re more than willing to imagine this stuff for yourself; they literally describe nothing about your god/goddess or your hero/heroine, so anyone and anything you can imagine can go there.

Now, I’ll fully admit that I got this game hoping (though not expecting) to have some kind of weight gain element to it. Like, maybe if I told her to eat enough times, the game would let you know she got fatter (spoiler: it didn’t, at least not that I’ve seen so far). I even made my goddess’ name “Extrabesa” and had her be the goddess of fat and food (that’s something you have to imagine, as there’s no option to say what your god/goddess has dominion over). Anyway, my point in making this post was to know if one of you glorious bastards are the one who told this to their little hero/heroine and, if so, if we could be friends on there.