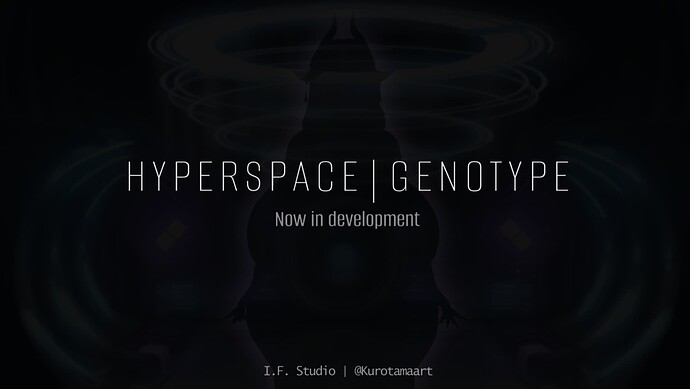 A few things I’ve been wanting to do came together, so here I am, starting my first game!

While there is many amazing text based games other there, with systems that blow my mind, I am but a monkey brain and enjoy pictures. For this game I aim to balance story, with visuals and casual game play. The game will be free, with a patreon opening up once I have a demo out.

It has a rather large scope, but I’m keen for the challenge. I’ll be using unity with live2d for characters/animation. While my art is satisfactory It will be a great opportunity to up my C#, design and writing skills.

Premise
“Hyperspace Genotype” is set in the future, with a sci-fi fantasy theme. You have been sent to explore planets by a company specializing in Adult Gene Modification. It is your task to explore the planet you recently landed on and find new species. You can obtain DNA samples from characters you like and bring them back to your base ship. With a bit of extracting you can test these mods on your Gene Modification Approved Companion. You can mix and match Genes to your heart content!

Gameplay
The game will be a mix of styles as I want to play with a few things in unity. The larger majority will be Visual Novel and a Casual Bullet Hell with RPG Elements. The themed Bullet Hell will be for gene modification sections.

Player Character
This is the least developed part of the game so far. While the focus is more on the companion and wild characters I would like to have the ability to customize the player too. I want people to play the game how they like, so having a visual representation of the player would currently be too wide of a scope. So far I was thinking having a text description with the ability to transfer minds like in Fetish Master. It will also be a good incentive to write some good base character code (character objects). I would love some input here!

Companion Character System
This is a more advanced system in my game besides character objects. However unlike character objects, I have a working implementation! This is your first Companion Character in the game and is featured in the teaser vid above. I wanted both good art, customizable sliders and full physics. While having for example a breast slider is not too difficult, 6 other sliders for other body parts gets a bit more tricky. The current character has Breast, Penis, Belly and Hips size variations. All with physics interaction with each-other and variation depending on the sizes of other parts. Got a big belly for example? The breasts are going to rest up more. What’s included in the teaser is just a small amount of the sliders capability, they go further, oh boy do they go further! I will later be implements other Companion Characters and multiple Animal/Creature types.

Sliders (You’ll will need to unlock the gene first of course!)

Wild Characters
Here you will find unique characters/biomes with differing traits. maybe a larger belly than usual? or anthropomorphic creature? You can befriend battle or bed these characters to obtain gene samples. You could bring back a belly capacity mod for example, splice the gene, and maybe your Companion will feel a bit more hungry?

Current State
I have an in-engine working Companion Character, with a base Bullet Hell mini game. The visual novel side will be a bit easier, so tackling the harder parts first. When I have some Character objects coded, and workflow for the VN setup, it will be onto the demo!

(Keep in mind this is a solo dev project, so it may take some time)

A Discord! Also soz should have noted before! I will be doing smaller dev logs on a Discord for now then updating here in bigger chunks. The discord has no public chats atm, but will be adding things like that later when I actually have the time to manage it XD Can check out a milestone timeline there too. HSG Discord http://discord.gg/TBFJAJGhKK [Discord Open]

Aye we be on Patreon! I’ll still be posting as usual on discord and twitter. You can just grab some bonus perks if your interested in supporting! It’ll also mean I can transfer some of my freelance workload over to Hyperspace Dev! [Kurotama HSG - Patreon Teaser]

Hyperspace | Genotype (Micro log 7 - 15/10/2021): As mentioned currently working on characters! Really enjoying this part, but don’t want to show too much. 80 character concepts completed (not all will be used in the demo) 3 Higher tier live2d rigs completed ~ Currently working on a template/workflow for character art & rigging. Finally working on some WG content! Here’s a little preview of the cheeky goblin “Twig” and a Hand input test: [Hyperspace | Genotype (Micro log 7): Twig …

[DL 12] Hyperspace | Genotype (Micro log 13 - 30/06/2022): Been a bit of a bumpy month with both our water pipes and wiring deciding it was a good time to peace out. Most things be fixed now thankfully, just waiting to be slapped by the bills XD I really appreciate everyone patience while I was sorting things out, had a few very sweet messages. I won’t be bringing up irl things too much, I can handle myself all good. However, I Just wanted to say thank you for everyone’s support both on Patre…

—————✦ Aye the base model is done! I have named the model Gena Type I (had to slide a pun in there XD). This model has been a rather long time in the making. Super happy with the results! I’ll be using it to develop a versatile base character and to prototype the player model for Hyperspace. I thought I may as well release it publicly too, for learning purposes, customization etc. Since this is the first version, there’s bound to…

Possibly already the first one seeing this, and i´m already interested so far, i believe this will have great potential so i hope you manage to acomplish your game!

btw my english it´s not that good, so sorry if there is typos-

Thanks! And I hope so too.
All good I’ve made more typos than you already

we [editor’s note: I myself] will be watching your career with great interest

I like the art style you’re going with, and your notes about getting the sliders to all play nice together are very encouraging. Looking forward to seeing your demo!

Love the look of trailer! I’m already hyped lmao. And it’s nice to see someone else also making a sci-fi game with multiple fetishes in it. Can’t wait to see more, hope this project goes well for you!

Was actually checking out your game post while I was writing mine up!
A sandbox sounds fun. gl!

Oh nice! I just uploaded a lil playable version of it so you can check that out if ya want.
And btw the art in your trailer is great, love the smooth, thicc expansion animations. Did you make those yourself or are they commissioned?

haha thanks! Keen to check out that demo!
Yep, illustrated and animated myself with Live2d (2d mesh animation software, commonly used for vtubers). It’s great since it has a Unity SDK too. The animation/physics is live, so for example a mouse could be tracked to make the character jump.
The plan is to make as much as I can solo, we’ll see how far that goes… (cries in C#)

That’s so cool! I might have to check that software out at some point, sounds very fun heh. That’s the plan for me as well, making as much as I can… (also cries, but in javascript)

woah! beyond hyped to see this, cant wait to try a demo

Aye ty!, hopefully dont have to wait too long.
Out of curiosity how long do you think a demo in this area should be?

hmm, whilst i cant comment on how long it should be specifically I believe it should be able to show off where you want the game to be headed and give a good insight on how the different mechanics of the games will function. sometimes a glimpse at whats to come can also generate not only hype but gives yourself a good target for where you should be heading

Aye thanks for taking the time to help!
Do you think it would be strange if the demo was a slice from the first section of the game and not necessarily the start?

Wait… why the hell is this so fucking good so far??!

Aye thanks!
I hope the story and gameplay can hold up without the fetish side too.
I’m aiming for higher production value so may take some time

I’ve worked in art, editing & advertising, so I know how to sell something, I mean… it’s free… But yeah hope to match the hype in game too!

Man, even if it doesn’t meet my expectations (I’m sure you deff will), I’d be super proud and happy for you to take on such a big challenge. This dev thing is not easy, much less doing such big of a project and having to play many roles in the team. (It’s pretty inspiring actually)

You’re doing a rocking job so far! I wish you the best of luck!

I think that’s fine. Prototyping the core of the gameplay and getting feedback on it is a smart thing to be doing early on.