So, long story short. I have a game I’ve been slowly tinkering with for a little while now and I’m finally releasing an early build for folk to try out! At the moment it’s still pretty empty and I’m going to have it walled up behind my patreon for a few days while my supporters test it and give me feedback, but I’ll update this post as public versions become available!

EDIT: A public version is now live, check it out below ~

Now, down to what this even is. 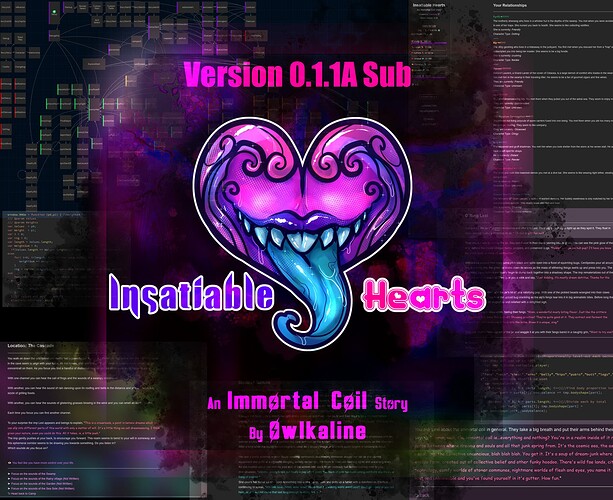 Insatiable Hearts is an erotic text-adventure game made with Twine set in my OC universe (If any of you are followers of my art, you might recognize a few names). It’s primarily themed around exploration, dating monsterfolk, weight gain and transformation. At this time it’s all text, but I do plan to fill it up with art later on in development. I’m primarily building this for my own amusement, and I’m only working on it as a side project so it might take a while for updates to swing around, but if any of this sound interesting to you I’ll be happy to see other’s playing around with it. ~

oh, and here’s a quick cheesy synopsis I guess: After some accident you’ve found yourself stuck in a dream world called the Empyrean Midden. You meet a dream-weaving imp who wants to help you get back to the waking world and sends you on a quest to collect objects of power in order to do so. Along the way you’ll bump into all sorts of monsterfolk who live among the swamps, shores and ruins of the Midden. Enticed by the twisting temptations of this astral plane, will you stick around to enjoy the sights, fill your belly on its foods and your heart with its lovers? Will you still be human in the end?

time to any% the spidergirl

Monsterfolk, WG, AND transformation? Damn, did you make this specifically for me?

FR though this is cool, I’ll definitely be giving this a spin ^^

excited to test it out sometime!

Can you fatten the monsters or only the PC is modified?

As someone whose brand is fat monsters, I’m glad to see appreciators. haha.

At the moment it’s mostly the player character, but the intent is certainly for both. Some of the characters can be fattened through debug or just a few scenes, but that’ll expand over time (just like them, ha)

This hound be curious but will it be weight gain alone, will there be other types of expansion, and any dog or cat gals in there? You’ve definitely caught my attention

I have followed your account on deviantart for a while, and now I see you doing this text adventure. When I saw it, I thought to myself: she is doing good work. Noble work, even.

Really pleased to learn about this project, and excited to see what you do with it!

As a monsterfucker I will be keeping an eye on this.

Weight gain will be a common theme, or at least, hedonism, which generally leads to stuff like, weight gain, pregnancy, horrible demonic transformations, etc. haha

But yeah, it’s going to include a variety of kinks as I’m into a variety of things. Weight gain being central, but it’ll include various forms of inflation, growth, preg & eggs, transformation & corruption, vore and more ~

As for dog or cat girls? Not as of yet no. I have a possum plague doctor gal, which is probably closest but my monster vibes tend to error towards the more monster side of things. Eldritch horrors and freaky beasties. You’ll find a range of both I suppose.

If you’ve seen my art, that’s the range of beasties you can expect ~

Reads most of post
This doesn’t sound bad
reads the last stretch
This hound now sees what you mean
To each their own though do pardon the curiosity but…
Why is that your cup of tea so to speak?

oh huh, I’m not completely sure. I guess as an autistic girl, I’ve grown up feeling othered both in body and by society. I find beauty and eroticism in those that are othered but are free and embrace their otherness, who are celebratory in their inhuman forms. To me there is something primal and erotic about a being who is of a human intelligence, but whose body is far removed. I mean I still enjoy human aspect, smiles, personality, breasts, bellies and bottoms, etc.
But something about all that being attached to a monster with a need to breed and feed that presents a danger or fear to humans, just does it for me. lmao

Why am I reminded of another text-adventure game?
Just please, PLEASE tell me it’ll at least be real words and not some alien shit we have to decode from a deep dive into someone’s old deviantart/furaffinity account.

Monster girls and weight gain… we then it time to try this game out.

Lmao
well no guarantees, I don’t claim to be a particularly good writer nor do I know if folk will find hot what I find hot. But yes, it should mostly be words lol

Also, for folk that have been having that weird “[email protected]” bug that’s been tearing up the games formatting I think we found what was causing it.

Did happen when folk downloaded it from my discord server, only the patreon link so I think patreon somehow was borking the raw html

I put it in a zip file this time, so it should hopefully work now lol

Let me know if the problem persists ~