Can’t say I’m familiar with that term, but yes, I am adding more body types. I’ll probably build a custom body type option down the road, but for now, yeah, I’m adding a more “extreme” version of an apple body type. But body types further outside of a somewhat standard human frame work are more likely to be acquired options through play, corruption or transformations, depending on how extreme a body type we’re talking here ~

But in short, yes, more starting options are planned and a more belly centric one is among them ~

Oh nice! Ventriphilia is a term created by the amazing juxtaterrestrial it basically means someone likes big bellies if you want a reference just check some of his stuff out.

A lot of the text and UI elements are frequently squished together and overlapping. It seems to only be a problem on Firefox, cuz it doesn’t happen in Chrome. 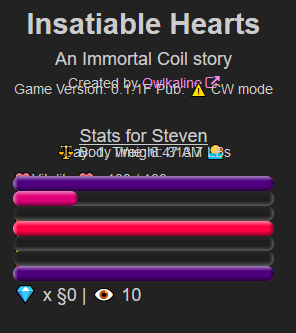 Oh geez, I haven’t seen this error before. I’m sorry this happened, I’m not really sure whats occurring because I primarily use firefox and this doesn’t happen on my end when testing. I’m not the most experienced with code, so I may have to check around and see what folk think might be occurring here before I can think up a solution. But thank you for the report!

Thank you all for your patience! This update took a bit longer than expected, alot has been going on irl getting the apartment ready for the baby and between work, mental health and everything else the game kind of got sidelined. When i was working on it, well, the things i wanted to do needed a lot more mechanical additions than i had planned. so, oops. But that’s all mostly wrapped up now and while its not exactly a content rich update it is an update setting things up for lots of fun stuff I’ve been wanting to do down the line.

So, what is in the update? Long story short, a bunch of little quality of life improvements, some new items and effects, the pregnancy and parasite systems have been implemented, an more advanced options menu has been setup and two new encounters have been dropped into the meadow. A breast expansion focused cursed statue event and some interactions with some milky cow-slimes that can lead to sex and impregnation. Among other tid bits. For all the details refer to the change log down below.

Now for going forward, I posted the previous poll a little ahead of schedule given everything, but I’ll be rolling with it for the next big update, i have some fun plans for this “gluttony curse” thing folks voted for, among a number of additions i have planned for the caldera region. Going to see what i can do, probably going to be leaning into my greasier more corrupted demon content for the next one. We’ll see.

I still want to get more content in for the existing character and try to implement the mobility/fitness systems. I’ll fiddle with it.

Come october irl, as a mother to be, we’re going to be more focused on getting the nursery setup and near Halloween we’re having a little baby shower. So it’s likely I’ll still be distracted. But still looking forward to the new content I have planned, got some fun to bring and hoping to do so soon, but bare with me, my minds a bit fuzzy lol

Anyways, thank you again, all of you, so so much for your continued support. It’s honestly making a big difference in our lives and its nice seeing how many of you are as eager for more of my game as i am! haha. Anyways, if you’d like to enjoy the update it’s up on my patreon for supporters to enjoy till I clean out all the bugs ~

Fixes
x Fixed the mutationclass error displaying when a neutral mutation is called
x Fixed Delphi’s menu options for the bitter bean tea not displaying when the player has enough spall to afford it sometimes
x Fixed Delphi’s swamp event showing up even after being completed if the player uses the left path on the fork in the road event
x Fixed ordering spirits and beers having inconsistent behavior under some conditions, What you order should be what you order.
x Fixed the debug option “decrease hair length” actually increasing hair length
x Fixed the resting dialog using the wrong location data at some points
x Fixed the drink ordering scenes converting all the font into Maeve’s dialog font
x Fixed blair’s canteen feeding scene not removing player’s provision levels
x Fixed Nico’s soup not adding calories or fullness on the first meeting.
x Fixed Nico’s soup flag not disabling as it should, meaning even upon declining on future visits after accepting it once, decline still acted like an accept
x Fixed some odd behavior with the crate in the swamp. It should no longer generate blank scenes or give the wrong rarity types
x the berry swelling status effect now stacks better and no longer bugs out when using multiple berries at once. The event scenes are no longer triggered by level, but instead level determines how fast each stage in the berry inflation sequence happens. So instead of multiple berries sending one to the end event, it’ll reduce the time between events from 120 minutes to 40 minutes etc (based on how many where used)
x Fixed a flag not deactivating when it should in Fyrfli’s initial interactions
x Fixed the “Lose Weight” debug command lowering provision weight instead of body fat

Changes
~ The way that calories are absorbed has been adjusted. Calories are subtracted after weight calculations instead of before. This should improve how calories feel in game
~ Mutagen stock is reduced by half when its relevant mutation is called, while unrelated mutagens will remain active.
~ Stacked status effects now have a new diminishing return scale, after 5 stacks it accounts for a power value of 3.8, a stack of 10 accounts for a level value of 5, and so on.
~ Changed the spall value of some items
~ Weight status change messages have been improved and additionally react to weight increases that aren’t fat related (height change, muscle gain, breast tissue growth, etc)
~ If stomach contents or capacity weight more than 120 oz they’ll begin to display in lbs
~ The debug stat display has been cleaned up a bit and now the name of the current passage is displayed as a footer on each passage when debug mode is enabled
~ Cleaned up some errors in Baronet Laurent’s dialog and added a few extra possible lines for when he reacts to the player’s weight gain
~ status effects are now organized and auto described from a pool of data. They also use a new tagging system allowing for more complex status effects like pregnancy and parasites.
~ Status effects with stages now scale with time passed, so instead of exceeding the limit only triggering one stage change, exceeding the time limit will trigger as many stages as the time passage should allot

Patch 1&2 for V0.1.1G: - (09/21/2022)
x Fixed udders still developing when disabled in the menu
x Fixed stretchmarks forming when disabled in the menu
x Fixed giving the temple maiden’s items sometimes displaying messages from previously gifted items
x Fixed an error in stat tracking that was causing the food swelling status effect to break
x Fixed an error that could cause multiple offering messages to play when donating to the cow temple
x Fixed mystery potion and temple offerings not assigning the “good luck” status effect correctly
x Fixed horn growth messages still appearing after reaching max size
x Removed some options from the baronet’s menu as that content hadn’t been written yet and those links were left in erroneously
x Fixed the meadow statue event missing texted do to a malformed conditional
x Fixed the meadow statue event not properly applying new breasts when a breastless character triggers the right conditions
x Fixed breast expansion messages playing while players without breasts are under the effects of the breast expansion status effect
x Fixed the option to feed kip cheesecake only showing up if the player had meat in their inventory
x Fixed an issue where accepting the soup upon meeting nico would cause fullness to become broken as an erroneous value was being assigned
x Fixed a missing dialog scene when talking to the Oojinn merchant about wild slimes

I was all excited for the new update involving stomach stretching and descriptions, and then I remembered its the Patreon build first. xD
I will wait expectantly for the public release of v0.1.1G

okay, hey folks thank you so much for your support but im sorry i haven’t had much of an update or anything. My computer crashed the fuck out on me a few days ago, my hardrive went dormant. I had to take everything apart, clean it out vigorously, find better parts and reconfigure stuff, it took a lot of tinkering. But i recovered my data even if it took a good amount of my afterwork hours to fix up, clean out and fucking around in the bios. So, the whole time i made no addition or progress to the game. Computer is back up and running as it should finally until i replace this dying harddrive in a few day (ordered a nice ssd to finally upgrade after all these years haah)

anyways i popped in a couple quick bug fixes for the night, but outside of major errors thats probably it for version 0.0.1G before i move onto making content for version 0.0.1H, so those awaiting the public release, shouldn’t be much longer now (unless a major bug is found and delays things lol)~

x Fixed an error that would cause the flags in the medstation to not turn off, resulting in all outcomes playing the contraceptive scene
x Fixed kips breast feeding scene not appearing even when player was lactating due to a misspelled flag
x Fixed the contraceptive status effect not preventing impregnantion by the moojin