You stated earlier that this game is a metroidvania right? Exactly how will that work and how long do you plan on making the game?

The vases from the gameplay footage vid will get to keep their winning smiles, right?

Thanks for the question Anony!

The team came into conclusion that it should now be an action-platformer, I don’t know sincerely if things are going to change deeper into development, we are going to try our best to lean more into the action-platformer genre from now on, but as I stated things might change a bit. The only thing I can assure you is that you are going to have fun!

By my very mathematical calculations, I calculate we are going to be done by the end of September, but If we go full maximum overdrive we might finish by mid-September. 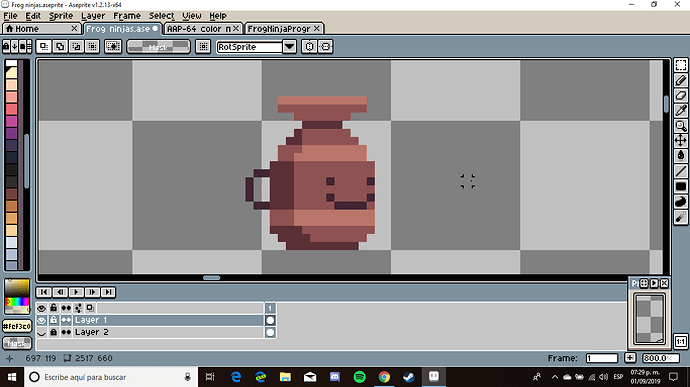 how exactly will the weight gain function?

Hehe, it is actually not a brawler but a 2D Metroidvania/platformer/rouge-like. Sorry for the misleading title of the game, but it sounds really cool, but if people keep thinking it’s a brawler then we might as well change the title of the game. I hope you decide to stay and watch our game grow!

Gain weight: by Eating enemies, maybe in the future we decide you can do it too by drinking potions or by eating food, but mainly right now is by vore.

Thank you for your question Wulf!

Ah, yeah, that was before we decided definately and ideas were still flying around

So with becoming slower do you also end up hitting harder or is tankiness the only benefit?

Right now we only have planned for the CHONC to give you a health boost and for there to be a downside of slowing you down. But now that you bring it up, it would be cool to add a damage boost too.

Thanks for the question Spree!

Ōkui: Beat em up and Eat em up. https://bellybelting.itch.io/okui-030-030-030 - #17 by BellyBelting (edit: this was already pasted and I didnt see it)
You stated it back in the old thread. And by how long I ment how long would you plan making the game, sorry if I was not clear, my English is not the best haha

Haha, don’t worry Anony. Welp, I personally want it to be a really hefty game, full of content, ya know? (I am getting really ambitious with this project) But I and the devs are undecided on that, but still, it is planned to be pretty solid and decently plump game!

Will the game feature some sort of upgrade system? If so, what kind of upgrades can you get–that is, will the only affect gameplay, or will they be reflected with changes to your character’s outfit or even body type–and what will they cost?

How long do you expect the game to end up being?

That’s all I can think of for now, knowing what you’ve revealed so far.

The game obviously won’t be some sort of 30 hour blockbuster, that’s way too much for us humble folk. At this point, I’ve no real good estimates on how long, but likely within 5 hours of playtime.

For uprades, we haven’t really planned stuff like that, unless you count getting different weapon types as an “upgrade”.

For explicit content, not much, if at all, from what we have at the moment.

So, a few questions:

•Does the currently-available gain sequence sprite represent the max size you’re planning, or will we be popping the frog’s top?

•Will there be any enemies who gain in size?

•Are the plans just for vore-induced WG or would something like an enemy inflating the player be something that’s possible?

I’m very excited for this, keep it up!

Very nice questions, we will keep the enemy thing on mind! Thanks!

I have a couple of question too!

Since eating enemies will decrease your speed, won’t there be platforming sections we won’t be able to complete until we’ve lost weight? How do we lost weight in the game?

Are there enemies which will eat the player character as well?

Quick question!
If the player can vore enemies, would the bosses also be looking to vore the player?

The most likely scenario of an enemy eating the player would be just in a boss-specific player death sceene as of now, but even that hasn’t been discussed yet, so take this with a grain of salt.