Overfed Chronicles is an upcoming state of the art fantasy RPG, currently in development. Made with the RPG Maker MV engine, it follows the paths and waistlines of female adventurers, as they embark on a big journey to become the best and heaviest adventurers.

In this world, adventuring is an institutionalized system with academy, rank and quest systems, where adventurers use their girth to their advantage.

I’d love to see a Blonde, tall, and mature paladin warrior, with a strong sense of authority and justice slowly being corrupted by gluttonous habits and lifestyles.

Sounds like an interesting game, hope you can pull it off! As for my submission, I’ve got an old Tabletop character named Lady Nathyyra Dawnarrow that I’m fine with you using. She was a pampered drow queen who was exiled from her court, but still prefers to have her companions do the work for her and to service her, with a bit of an exhibitionist streak. Her class was a rouge, with ample curves, especially in her lower body. I do have an old commission of her here- 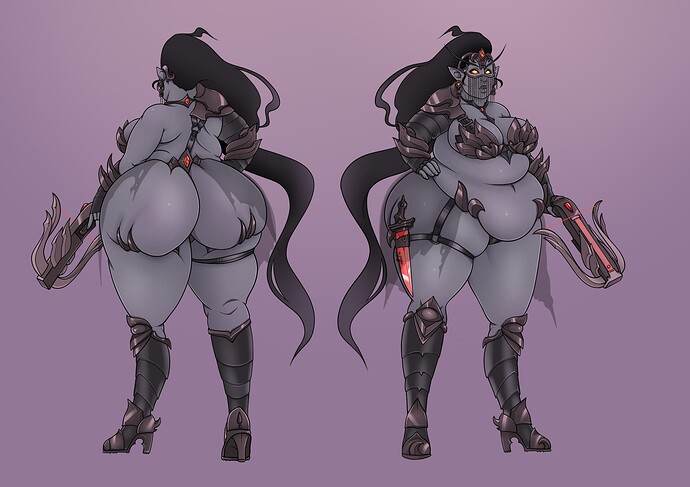 I coincidentally had this unused sketch of a blonde girl from last month, I had both a lot and nothing too concrete planned for her. Besides the face needing a little work, a serious paladin sounds very nice! 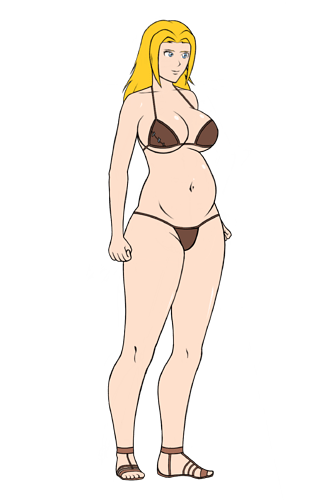 Very promising as well! I like her being a dark elf with one big butt as well as a noble past. It’s also very nice to hear new classes such as Paladin or Rogue.

These characters will mostly serve as padding for the first part (academy training) along possibly being the protagonist, while a select few will be kept as recurring characters and / or party members (3 total).

I do have an idea or two about the protagonist, maybe a snake amazon or a dark mage girl, but we’ll see.

haha that’s convenient and also the body type I had in mind. I wish you luck on the development!

Maybe there could be a slime-girl mage, I don’t really have a particular sort of mage in mind. Not very intelligent, and often aloof, but with great memory to sweeten the deal. She could try to restrain herself from eating too much, but fail time after time due to it being a natural response of hers.

Another very nice suggestion and coincidence, I had these two laying around as well. I plan on slimes being one of the first mobs you encounter, but a slime girl adventurer sounds lovely too, I’ll just make her a little more humanoid (regular skin with slime hair). 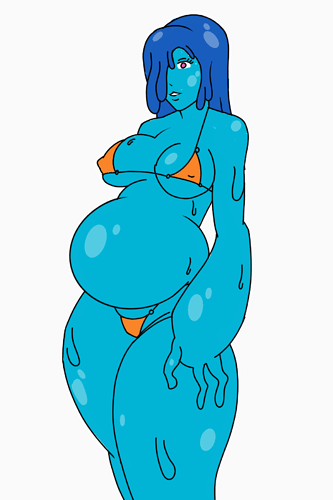 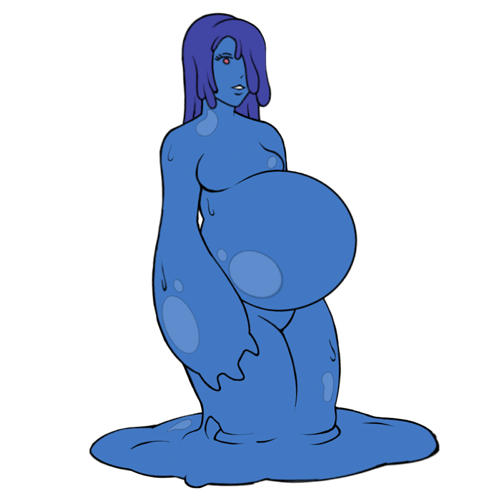 Maybe the slime mage was a normal human when enrolling the starting academy. Then, somewhere before you meet her, her body gets infested during some training gone wrong, turning her into a slime, and she’s just dealing with it. That might be some way to explain her being able to use magic, yet still being dense in the noggin; she learnt the magic before getting dumbed down by the slime.

Personally, I wouldn’t mind trying my hand at a character. I’m always looking for RPGs that have protags besides human/human-looking ones, and I’m wondering how non-human a character is allowed to be.

It can be worth a shot (and it’s free) but I’d probably heavily change them and / or keep them as a possible background character.

I like your art style and I’m keen to see where this project goes. Personally, I like a good druid.

Mayhaps a bottom heavy rakshasha tiefling that thinks they are a pureblood tabaxi?
This hound has very little in the way of knowledge but if you look at it, rahkshasa and tabaxi of dnd are similarish in behaviour if taken in the right contexts

Got an idea right here:

Bartender with an initially slim body that slowly turns into a beer gut (also wearing a suit. Suits are great. Sharply dressed girls are great.). Short, brown hair and a to the point attitude developed from years of kicking people out. Probably couldn’t be fit in as a main character unless you did some kind of booze related attacks or something

I did have an idea for an elephant character I wanted to draw and present, but I’m still thinking about her backstory. Maybe it will come to me as I draw her.

But, just gonna say, it would be very disappointing if the playable characters were required to still look vaguely human. That’s what every other RPG is doing these days: Every character needs to look like a human even if they’re not supposed to be human.

I do have something in the works about a bartender girl with a beer belly (they’re underrated), although she’ll probably only appear in an inn, instead of in the academy.

That’s fine, I don’t find elephant anthros attractive because of the trunk and what have you. Could make for an interesting enemy though.

Concerning the art disappointment, RPG Maker has a nice trial (a month?) and you can get it for only 70-80 bucks.

Assuming some more ‘beastly’ features are allowed, I do have a lovely fox here.
Alchemist or some form of magic-user would work.
She’s a bit of a prankster, but she’s not actively malicious. 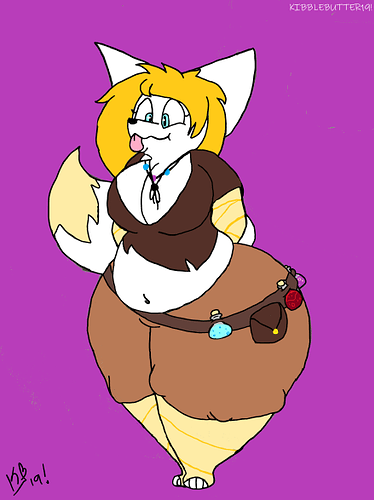 I don’t want her to be an enemy. What kind of anthros DO you like, or think would make for a good protag?