It Wasn’t. Must be one of the old events still hanging around

How do you upgrade the lab?

You need to recruit at least 4 party members. Then when you wake up the next day, the event will trigger automatically.

3 questions. 1) where is the guide to the game because i can’t seem to find the file. 2) how do i recruit the slime girls. 3) i beat the queen, but can’t get to the other island, how do i do that

The game is really fun to play. Glad to see lot’s of new content since 1.4.4, though 1.5.5 is a lot more buggy.
Will you add some quests with Amanda and Hannah?
I don’t know if it’s supposed to be this way, but no matter how much i concentrate, i can’t pull even one successful steal or steal block, the time runs out too fast.
There is also Eloise, which is has the previous opponent’s name half the time in the contest. 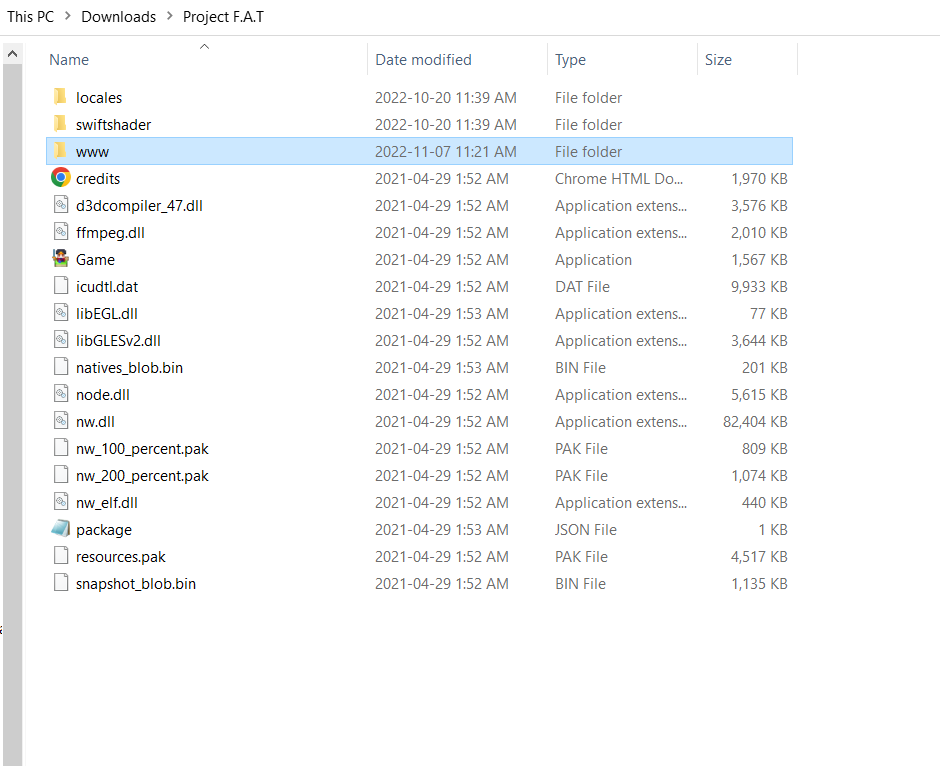 The game is really fun to play. Glad to see lot’s of new content since 1.4.4, though 1.5.5 is a lot more buggy.
Will you add some quests with Amanda and Hannah?
I don’t know if it’s supposed to be this way, but no matter how much i concentrate, i can’t pull even one successful steal or steal block, the time runs out too fast.
There is also Eloise, which is has the previous opponent’s name half the time in the contest.

I tested the button presses and it’s very doable. Albeit a bit hard. I might up the time duration on it a little more.

this is all i see in the main folder. am I missing something or is it just not there?

Check inside the www folder. 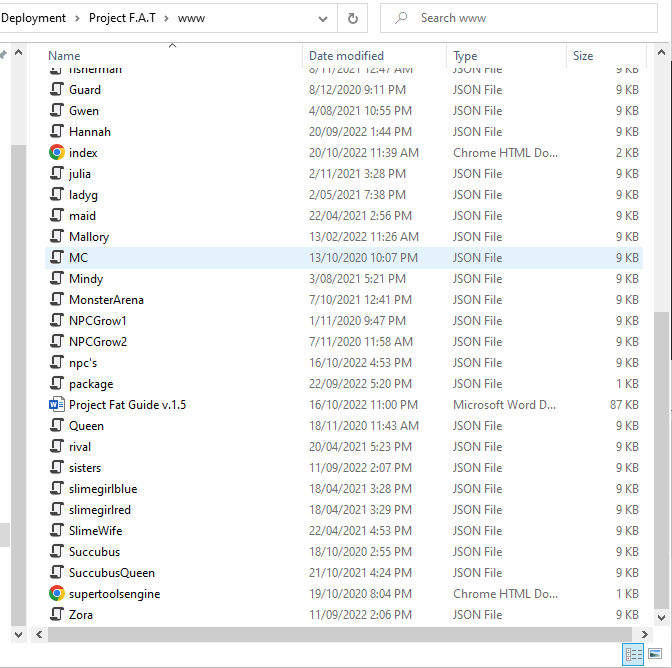 i see it now. thanks for the help!

I’m impressed with what the new update has to offer, companions, new combat system? Greatly pleased and keep up the good work NickSav! Take your time on polishing a legendary update to make this game go down in history good sir!

I myself admittingly, checked the other 2 cities, succubus village, and even the forest for the npc that I could recruit for Lamiagra in order to get the ultimate stew, no luck so far. What region do I go to in order to recruit the person to provide me the ultimate stew? If someone knows the region, I’d greatly appreciate it!

Thanks! I appreciate that a lot!

If I can just make a bug free version for once, I’ll be happy

The NPC for the ultimate stew is in Liamargia. They’ll go to Icycull and you can get the quest there. You then need to go to the castle library. Find the bookshelf that triggers it and go inside. Play out the scene and take the book you get back.
Your reward is the recipe book.

Well, i played this game when it was 1.3 or something i believe, and now it’s soooo different like there’s so much stuff to do. The pause menu is different from what i remember, but the main hud, the one you see while you playing i think it needs some little rework, like having 1-4 fullness bars in one corner, knowing that some npcs now can go with lucia (for example you can make a red bar for lucia, one yellow for isabelle, one green for the goblin, purple and light purple for tiffany and her sister and blue and a lighter red for the slimes), and a corruption counter for both lucia and isabelle

You reworked the contest hall so many times lmao but i think leaving just like this is fine (1.5.5), but i’d be good if you add more time in the qte (when they steal your food) because is really hard to finish it before time runs out.

And about joiplay, the game’s running reaaally good, sometimes it can’t keep 60 fps but it’s fine, but i think this is related to how optimized joiplay is rn or how good is my phone, idk could be both things or neither.

There’s a goddess store mentioned in your guide, may i ask how to get that store?
There’s also a girl called Amanda, but the quest isn’t in the guide, correct me if i’m wrong but isn’t the same girl that’s always close to the goddess statue?, I think you need to have high corruption right to get that quest?.

Good luck and keep it up with this game @NickSav

Originally the fullness and such was kept on the main HUD. However since the party members can be added at different stages, the HUD can’t quite reflect that (SRDude’s MV hud is mostly static unlike his MZ one which is dynamic. So if people recruit certain members over others, the HUD will often get messed up and look awful.) So I removed it purposely with the idea of trying to minimise the amount in the HUD. (Had I set the resolution to 1920 x 1080 when i first made the game this wouldn’t be an issue, but the RPG Maker default window is super small, so everything gets crammed in there and looks kinda shabby. Maybe once the game is done, I’ll go through and resize everything for a bigger resolution so things don’t look clumped.

I know it’s a little annoying like that, but the way its set up each food has it’s own event script. If I used a different engine that wouldn’t be an issue, but because the items are setup kinda uniquely, it makes using multiple at once more hassle than its worth.

Yeah… it won’t change anymore. If I do change it, it’ll be deleting it and the building and never touching it again.

I believe that’s phone dependent. The game thankfully isn’t too intensive, so it should run fine for the most part…

Yes, so to access her domain for the first time, you need to get 10 successful prayers. The you can visit her. The store shows up once you complete Mindy’s quest for Ambrosia. and Amanda is the vore girl in the slums area, who requires a high corruption to being the quest.

question: are there any free tips/hints i can get in game?
for example i got cook book 2 & 3 but cant find book 1, i got an inv full of monster parts and a book “monster parts & u” yet i still cant craft if thats even a thing, there is a quest for ice-type enemies yet im going in circles in the forest and then there is bottom left corner machine
right now im just doing the guard-quests and capturing mons
edit: also have found no spells so far

There’s a guide bundled in with the game. It’s lacking some information but the majority is there.
Including shop lists and such.

The ice enemies are in Icycull (the next city) you need to beat the queen to progress from there.

hey nick i just wanted to ask out of curiosity what is and how do you get the ascension ending?

Essentially Lucia becomes a goddess (it’s super janky currently but I redid it for the next update)
To access it, you need to eat ambrosia as it is 10 times. Then go to sleep in the lab.