Heya, name’s Aerilate.
At the start of 2021, I tried out the RPGMaker MV demo and using that short time period I put together what I hesitate to call a “game.” It was more of a 15 to 20 minute fetish experience. I eventually got the full version of RPGMaker MV, and this game came out.

FINAL UPDATE LOG:
I bet a good chunk of you are wondering what the status of Royal Banquet is. Well, it’s really hard to say, but:

I have no plans on continuing Royal Banquet.

The main reasons for not completing RB is simply because:

Royal Banquet was a week-long project, where I entered with zero experience and came out slightly more experienced. Really, it was me messing around with RPGMaker MV as I learned how to fiddle with basic event commands and spritework. I was hugely inspired by the work of my friends and other games such as Witch of Gluttony or Untitled Stuffing RPG (Now known Gumia’s Unbelted Terror, I think?) I really can’t thank those people enough for inspiring me to make a silly little game myself.

But see, that’s the thing. The “game” I made isn’t even a game by the slightest of standards. It’s more or less a 20 minute tech demo that just showcases “Hey! I made something in RPGMaker! Look at me go!” I sincerely do appreciate the folks who’ve played my little experiment and supported me on Weight Gaming, and right here on DeviantArt. It genuinely means a lot to me, and it kills me that I have to announce that I’m not working on it anymore. Or rather, I haven’t been working on it at all. The last time I opened up RPGMaker MV was on May 1st, 2022. Most of my time has been spent learning how to draw and going through college to learn how to IT. Not that those things excuse my laziness one bit. I’ve simply lost interest in continuing this project in any capacity.

The biggest thing I need to apologize for is how I ended up overhyping everyone in the first place. Once my game started getting attention, I started to do what I do best: overthink things. I wanted multiple paths, a fully-realized story, fights and minigames and the sorts. Nothing HUGE, but I started to promise a lot of features that of course, now in 2023, haven’t been realized. In fact, as a lot of you can probably see, I’ve been focusing more on my art “career” instead of my gamedev one.

So I wanted to apologize to everyone. I’m truly sorry that I ended up not delivering a finished product, and leading everyone on with false promises of something greater.

SO, WHAT HAPPENS NOW?

I’m going to continue to focus on my art career, but that doesn’t mean my gamedev career is COMPLETELY flat in the grave - there’s potential for another game project in the works, but right now I’m not even in like - pre-production for it. The existence of it is simply a google doc sheet brainstorming ideas. What I’m hoping for is that, with my growing art style, I can combine my art with the new game, and make something hopefully original and better than Royal Banquet.

Once more, I deeply apologize for everyone who’s waited for - what, almost THREE YEARS now without an update? There’s really just no fucking excuse for what’s basically pure laziness and ignoring a genuine audience who wanted to see this project come to light.

But overall, I want to thank everyone who’s played and shown interest in Royal Banquet in the first place. I also wanted to thank the people - mainly, Pacci-d and Grimimic who’ve taught me how to use and actually MAKE something in RPGMaker, even if it was a 20 minute fetish “game.” It genuinely means a lot to me.

I’m very sorry for my inactiveness for this game, and once more, am incredibly grateful for all you guys who showed me support in the long run.

I wish to give immense thanks to Pacci-d, for making custom expressions for the princess, adjusting the original princess’s pallete and essentially helping me figure out RPGMaker as a whole. Without him, this project probably would’ve fallen flat on its face. He makes general expansion art (mostly pregnancy themed) but I seriously encourage you to check him out, as he has a Deviantart page here: Pacci-d - Hobbyist, Digital Artist | DeviantArt
He’s one of my best friends and an amazing artist, and he definitely deserves a watch.

Really well made! Short but I was surprised at how many variations of lines you had for almost every object depending on how stuffed the princess is. I’m certainly looking forward to future games from you. I only hope the next RPGMaker sale is soon.

A good effort! ExtrudedSquared’s comment caught my eye also and I was impressed with the number of NPCs with differing personalities you had created as well. Really fleshed out the banquet minigame having such a crowd.

Also amusing if you talk to the guard in the corridor, the chicken continues the same path and starts effectively chasing the guard haha.

I can’t wait to where this goes, even if we have to wait a few months to see it. Fattening up the princess, and perhaps others, too, will be fun.

seems intresting gonna try it out

Short and sweet, I really enjoyed it. Some fun dialogue, fun little mini game, tons of little interactive bits… really good showing for a first timers game. A very fun concept too. Maybe a little more could be done on her trying to be polite, but suffering because she needed to burp/whatever, but that’s me always wanting more. Good work, I hope you are able to get RPG Maker and continue working on new things!

Thank you for the kind replies thus far.

Once I acquire the program, I’ll get to work on the first Bad End, mostly concerning the kitchen’s maids.
Afterwards, lots of different stuff - mostly a different pathway, a bit of a lengthier stuffing sequence, and some sprite changes.

The thing I’m looking for most feedback on is the minigame itself. Is it too easy or too hard thus far? Anything you’d add or change yourself? Nerds post is something I’ll keep in mind.

The minigame is easy, but I doubt that its difficulty matters. If you’re only focusing on making a fetish game, I’d caution you against trying to “challenge” the player too much. From what I have seen, challenging gameplay only frustrates the player, as it serves as an obstacle to fetish content.

I downloaded the game, now just play and see if it’s good: D

All I have to say is…“cluck fucking cluck”. Great game so far honestly though, lot of fun

Played through and got the overstuffed ending, will go back through and see the other ending, have to say really enjoyable experience, your dialogue writing for the characters is great. Really appreciate the quick start allowing you to get to know the princess by exploring her room, overall her character is quite enjoyable to witness and the chats with the guests do foreshadow some interesting future interactions. Sound effects were well done, really like how you paced the scene after the stuffing, the descriptions and object interactions was definitely something I was not expecting and brought a nice extra dimension of immersion.

Regarding the mini game I think that was perfectly fine, for me having the minigame centered around acquiring the food is fine but I also enjoy minigames centered around the consumption of the food as well, not saying that was necessary, I just notice that a lot of times there is a balance to be struck in terms of the ‘acquiring of food’, ‘consumption of it’, and of course the ‘aftermath’, in this case the consumption part was relatively short in favor of the other two, again not a bad thing, just something that came to mind, honestly its a preference and could be played with in different ways.

Keep up the great work! will try to get the second ending now hehe

I was genuinely surprised at how funny and well-made this was. Like, damn.

Great stuff, if you’re working on more content I’m super excited to see what you have in store.

Decided to give it a go

Again, thank you so much for all these warm replies!
I hadn’t expected two Let’s Plays in a single day, lol…

I’ve written down a short goal list of what to expect in future versions of this game, from short-term goals to long-term ones.

Once more, thank you for all the warm responses thus far. 1k downloads already - it feels almost overwhelming.

This will most likely be the last time you hear from me until I acquire RPGMaker - unless you have more questions about the game thus far. Once more, thank you all very much!

If you have not already considered this, I’d like to recommend putting this game up on itch.io, since it has a nice ‘pay what you want’ system that could help with acquiring funds for purchasing RPGMaker MV. Personally I’d gladly donate to help you continue your creative work on this.

Hello all!
Quick update: RPGMaker MV went on sale a lot quicker than I anticipated. So I’m happy to say that Royal Banquet is back in production! I’m going to be around the forum a bit to get a couple questions answered, mostly about how to get bigger sprites to work and how to get bad ends functioning…

I’m unsure when the next update will fully be out, but I will say that next update I aim to have

Thank you all for being so patient! I can’t wait to finally start working on this long-term project!

edit: Made a link in the game project forum specifying some of the bigger questions I have.

Hi, relatively new programmer to RPGMaker MV. I made a short project awhile back called Royal Banquet using the game’s free trial, and now I have the full version of it. One of the biggest changes I’d like to make before the next update is putting in non-chibi sprites. I’ve seen resources within the forum like this one here, but I’m not quite sure I understand how to fully implement them. The other main effect I want to achieve within my little game is for the character, the princess, to have h… 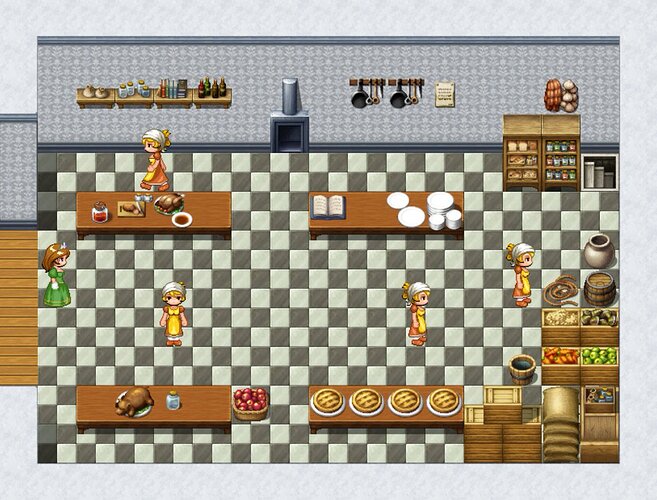 Oh dang. I like the new sprites. Great work. Can’t wait to see where this goes.

I checked this game out the other day after holding off for a while, and I’m impressed with the amount of detail. The characters are fun to talk to and the narration adds a lot of character to each route. I’m excited to see what you have planned.
If I can make a suggestion, how about an alternate ending specifically for grabbing no food? Not a high priority, I know, but it could add a bit of character to the game.