Now that a working version is Up and running I am going to move forward to adding new characters while I work on the improved version of the project. 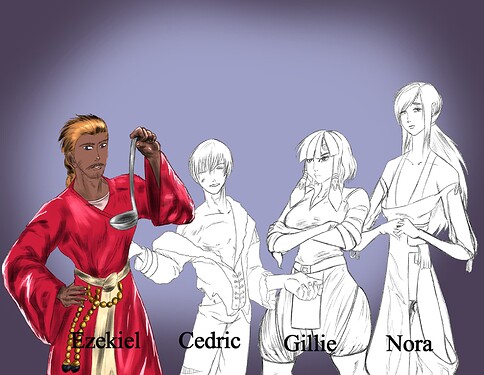 Starting from left to right,

Ezekiel: the Towns default cook (kind of need him for a game like this), I want to make different aspects of feeder and feedee dynamics so a restaurant owner would be a good fit, taking cues from tree of tranquility line of the harvest moon/Sos series I was thinking of putting a part time job system (nothing major just when the prompt is selected fade to black and then after 6 in game hours you will get a small amount of money based on random chance)

Cedric: the “homeless” character, same idea with Ezekiel but this guy is of the bad influence feeder won’t actively push but the amount of snacks he will offer will cause some damage.

I am planning to have at least 2 characters done relatively soon dialogue written, I also know that the way the current save system functions adding new NPC’s might break things so I will work around that so you can keep the save and enjoy the new content, as usual I hope you enjoy what I make in the future.

Support
as of right now I am in a state of live or die (not literally) in terms of money. if nothing changes I am going to have to put this project on hold for the time being.

To help with that I have Commissions open on my Ko-Fi . I also have a Patreon any help will always be appreciated and patrons will be able to help influence the game as I have options in the works.

as always feed back will always be appreciated JM

This looks like a super promising project! I’m definitely going to keep an eye on this as it progresses.

The rune factory gameplay loop fits with weight gain so well, and the little map draft and character designs all look fantastic. Curious to see how they’ll translate to 3d, but 3d games are seriously lacking here so that only makes it more exciting! Best of luck with this and thanks for sharing!

thank you! hope to meet your expectations.

Absolutely love the character design(especially the player characters) and it sounds amazing, looking forward to it o7

keep up the great work

Ah Rune Factory Frontier, the one game that I could never finish because of those damned Moondrops never growing right. I don’t want to admit the amount of hours I’ve spent researching and growing them…

At least the other two games I played were great, Rune Factory 3 (the one where you turn into a monster), and Tides of Destiny. Hope you pull more inspiration from those games as well as the others.

Yeah, I will admit frontier has some really obtuse stuff to progress in the game, like locking half of a dungeon of behind a level 6 heart event. I’ll do my best to avoid that.

This looks amazing, I can’t wait to see the result!

Oh yeah, also make sure the farming isn’t strange either and is responsive to a degree. Frontier had those spirits that really messed up the farming completely (see Context, warning it is long and somewhat a rant…).

Don’t limit yourself to just Rune Factory, there are plenty of other games that can also bring ideas.

The complexities of a 3D game design with mixed modes of gameplay are such that I strongly, strongly recommend approaching this game conservatively; identify the core of the game and avoid trying to add in every single mechanic, system and asset that might be found in full commercial games. Especially if this is a solo project.

For instance, rather than have a big open 3d overworld, identify the most important locations for gameplay and have them act as separate areas; probably something along the lines of

A problem I’ve seen with a lot of farming games is the amount of time spent as a walking simulator. If you have to physically walk from one side of the map to the other then you messed up, especially when weight gain is involved. Solution: cut out hauling items from gameplay. If you order something, it is delivered without your direct involvement. Besides, if the farmwork is a form of indenture, then the MC shouldn’t be spending time off the farm without approval.

Mind you, all of the above plus most of your OP has been about gameplay and features rather than setting, narrative and story. I’d be happy to help out with that if you’re interested, it’s been a while since I’ve written for a game, but it’d be a nice change from what I’ve been doing lately (mostly comic/graphic novel scripts).

3D will take a lot of time and work! Feel free to send me a DM if you want some professional feedback on your 3D art!

I would like to give updates every week or so, sadly it’s still mostly technical stuff done, weather is now in and I have the NPC schedule coding done, for the most part it’s just making assets. in the meantime have a little sample of the renders

Those renders are looking incredibly high quality! Really loving the character design and how expressive she is. Personally, I’m happy to hear about the technical stuff too. It’s nice to get some insight into the development process and hear about what is being worked on. Keep up the awesome work!

Updating to let you know and just giving a general question to ask.

As it stands right now with the models I am currently working on the expanding rig (the way it works now I just have to get the weights paints to distribute properly ) but I would like to know which would people prefer?

To get the character models ready but no expanding models but with images that show the gains or get the models to properly expand and do the images later.

Other than that leaving you with this little gift, JM.

I’ll be honest I’m confused by your questions on which is preferred vs your survey choices. I think both a bit unclear for me.

Sorry I should have worded the questions better

yes those are the choices

As far as making the game is concerned, the only art assets that should be needed right now are the minimum needed to cover the early game design process. Odds are that no matter what work is done now on sprites and model morphs, things will have to be changed later on. Refining, polishing, etc of visuals are all things best set aside until the last stages of development when the game itself is more or less in place.

I know it’s not the most popular or flashy advice but that’s my 2 cents.