I’m now working on this again

If you’d like to support the future development, you can do so over on my Patreon page. There are quite a few images on there (mostly game characters), as well as a few spoilers. The spoilers are clearly labelled!

The download links are below. While you’re downloading it, PLEASE read the notes.

Please don’t message me about testing future versions. Once they’re ready, I’ll be asking for volunteers in the thread.

If you get stuck or have problems, please check out this fantastic FAQ/Walkthrough by @Krodmandoon before posting in the thread.

132 Likes
Are there any good down to earth realistic weight gain games out there with a female player character?
A user maintained list of games
Hello Everyone! Looking for new games!
Tramp
Hello im new
"Weighing Your Options" - a wg visual novel with multiple endings (poll)
why hasnt a post been made about which program to use
MOP October 13, 2019, 8:53am #2

looks good, what do you think which themes you will include? (inflation, wg etc.) and to which sizes they will go?
wish you good luck with your project^^

Thanks for all the likes! And the comments. Definitely encourages me to keep going

I’ve been working more on mechanics than game since my first post (although I have fleshed out the story so far a little as well) . Boring stuff like money/time counters, location icons to jump to etc. Best to get that in place early on, I think!

Themes? Hmmm, definitely weight gain. That’ll be the main theme of the game , for sure! Also feeding, possibly a bit of humiliation/teasing. Maybe some dom stuff too. Can’t really be a feeder without a bit of dominance

Oh, and maybe a bit of pregnancy too? Who knows…

As for sizes, you’ve already seen the start point, but for comparison, here’s the start and roughly what I’m aiming for. Again, very much WIP. Still getting the hang of Daz Studio! 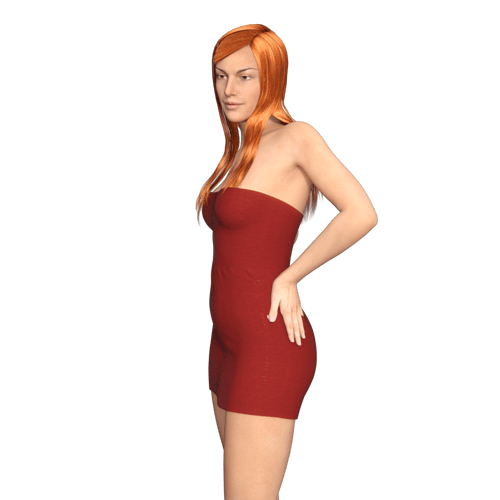 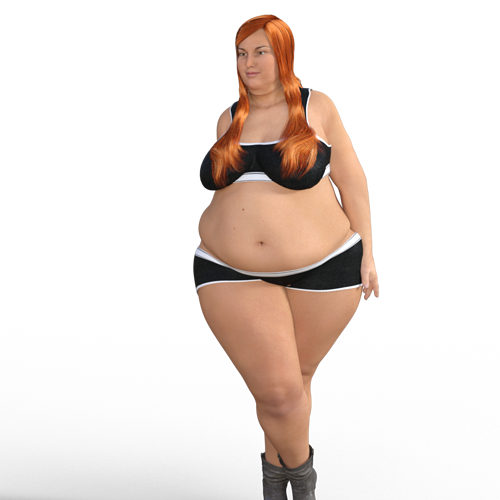 Ok… question for anyone who’s following this.

Obviously the game is going to feature fully rendered girls (hopefully more than one girl if all goes according to plan), but I’m in two minds about rendering the player character.

It obviously looks better if the whole player is visible, bit imo, it really breaks the immersion if the player looks nothing like ‘you’. So, I’m debating whether to pick a player figure and include the whole character in each scene, or just to include necessary bits (i.e. hand rubbing overstuffed tummy, hand feeding girl, etc.)?

I’m leaning towards the whole character - it’ll make it better for intimacy, kissing, cuddling etc., but does anyone have any thoughts?

Oh, and here’s a pic of a (for now) very slim Alice trying to stick her tummy out… 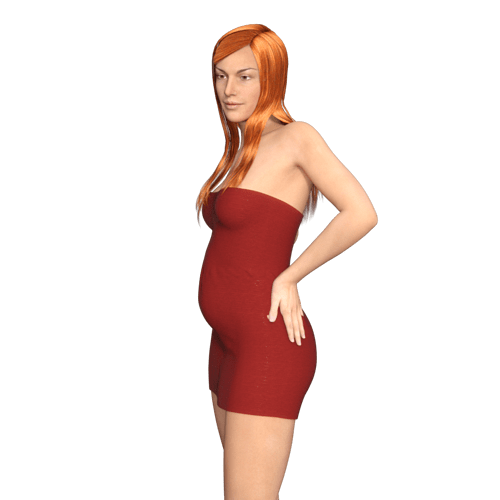 Yeah, been thinking it over, and that’s the way I’m gonna roll

And, in other news, Alice has had a bit of a HD makeover… 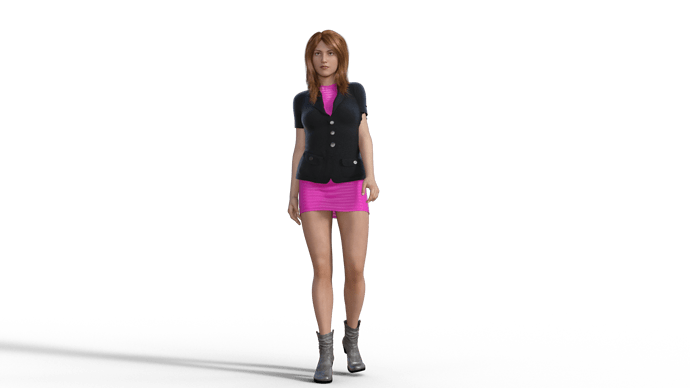 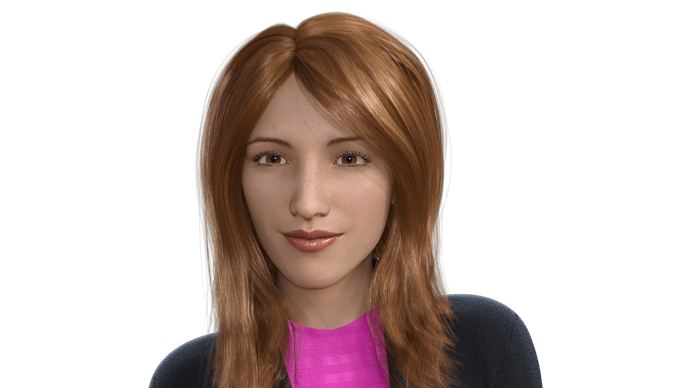 Definetly seems promising, gonna keep my eye on your progress, best of luck!

The 3D art looks spectacular, though personally hope the double chin either isn’t as big or have some sort of a different design. I’ve seen similar designs like that in DeviantArt, and they’ve always seemed a little off, at least to me.

Otherwise, it looks awesome, and the HD update is even better!

The cafe backdrop isn’t 3D art, it’s just a placeholder image that I grabbed from the internet

(If you look carefully, alice is actually standing in the middle of a table!)

I’m hoping to use properly rendered backgrounds for each scene, although these cost money, so I’m limited to whatever Daz is either giving away or has on sale! I’ve started working on a properly rendered cafe backdrop though. Again very much WIP, but it’ll give an idea. 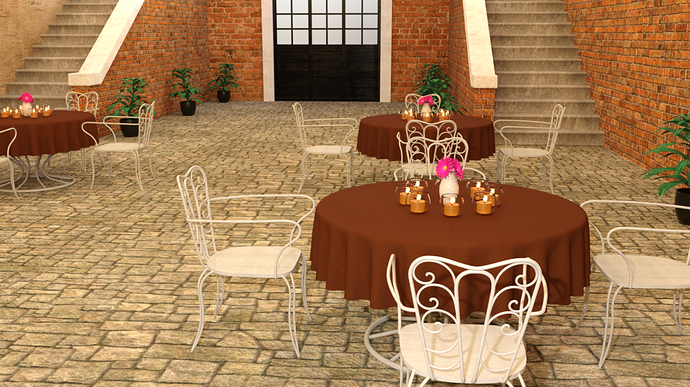 And now I think of it, looks more like a restaurant than a cafe

Plan is that if I can use rendered backdrops rather than static images then I can have some degree of interaction - sitting in the chair, food on the table etc…

Oh, and the double chin reference is tongue in cheek. She doesn’t actually have one… yet

Looks amazing so far, that make over looks stunning! Made some really good progress so far by the looks of things, keep it up (no problems there lol)

Redid the cafe background yesterday. My plan is to have two or three different renders for each room/area in the game. I can then overlay the characters on top of those as necessary and, like I said, that’ll allow some interchange with positioning, props etc.

Don’t think I’ve got the lighting quite right yet, but it’s getting there! 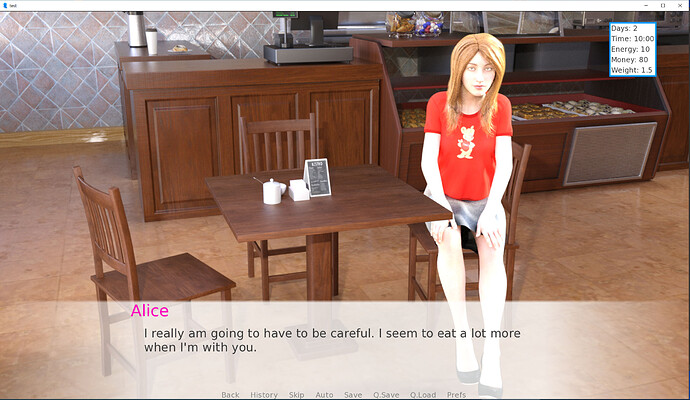 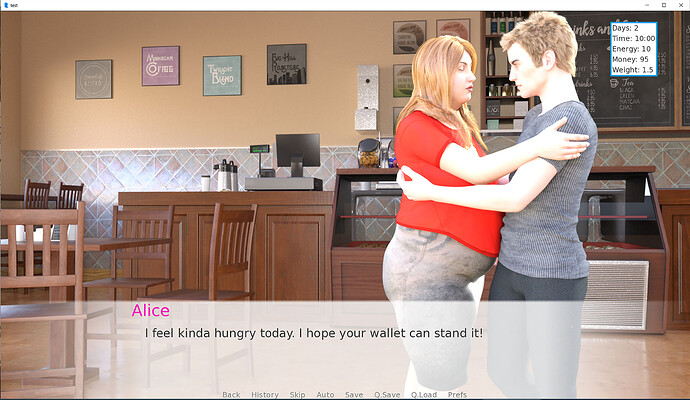 Ok… here’s a well, not demo, it’s not really enough of a game yet to be called that, so how about pre-alpha alpha?

Still pretty rough, but as far as I’m aware there aren’t any major bugs. There’s no weight gain in there (yet), just some basic setting up of the story and a couple of replayable scenes.

Feel free to download it and let me know what you think!

edit This demo has been deleted. I’ll add any subsequent ones to the first post in the thread.

Wow great so far. There are a lot of games in this style, 1000s on F95zone - yet I believe none or close to that feature WG let alone focus on it. A lot of these games get patreon support, so who knows. You could corner a market. Gj, looking forward to the post alpha alpha.

Hehe that was a quick reply. I didn’t think the ‘demo’ would take such a short time!

Thanks for the compliment. And yeah, I’m considering Patreon. I’m not really looking to make money out of this, but I’ve already outlaid some cash on assets and it’d be nice to cover my costs.

Yeah I assumed there wasn’t anything after the different options of asking her out and that the pub isn’t in yet? The cinema scene was great though. Can’t wait for more

Yep, I do have a few ideas for the pub, but I don’t have any assets for that as yet, so it’s not a high priority for the moment.

And yeah, there’s not much else in place at the moment. Although if you visit the park after you’ve been introduced, there’s a chance you may meet her there.

Can’t wait for more of this game. This has so much potential!

Thanks! Comments like that are a big inspiration to keep going

And wow - almost 100 downloads. I’m flattered! Given that the game is in such an early stage, I thought I’d be lucky to get ten!