Come, come - she can never be TOO heavy!

She’s definitely not heavy enough yet

Thank you it is best game that is present in this forum without any doubt. I really can’t wait for more.

Hmmm, not sure about that, but it’s almost definitely the best game in this thread

I was just poking around at the pictures on your Ko-fi page… I never realized until now how much I needed a Janet who is as fat as Alice in my life, but my that render was fantastic.

The actual number for Alice’s weight can keep rising even after the game has no more content to offer. The game will let you know you have hit the end of the content with a “to be continued” screen. And until you have hit that there is still content to see.

How much is the final release going to cost?

We don’t even know when the game is going to be completed. Trying to guestimate cost is a wasted effort.

Hey , I’m new here . I’m trying to download a version of the game . Specificity the PC version for google drive linked in the very first post in this forum . When I went to download it tho it said it was to big to scan for viruses.

I would like it if someone in this forum could let me know if that version is virus free. Thank you .

First off, welcome. Nothing linked on the forums here would be still be left up if the link was malicious. That notification is a generic Google warning that just states that since the file is over a certain size they don’t scan it to verify that it does not have malicious files mixed in. But the links are fine.

There are sites out there that have free file scans for viruses and malware if you’re ever uncertain.

Thanks @Krodmandoon . I just wanted to double check cause if my computer gets damaged then I’m gonna get damaged. Thanks .

@jcc309 I like Janet too - especially now she’s not as thin as she was! I wrote a one-off scene a couple of weeks back where she figures quite prominently and there’s more from her to come.

@toby331 As ever, @Krodmandoon is correct. Alice will continue to to grow until you hit the ‘to be continued’ screen. You can carry on playing after that, but there’s nothing new to see. All you’re likely to find is bugs as the game hasn’t been tested beyond that point.

@booberizgreat I haven’t decided on that yet. I’ll give it more thought once I actually have the thing close to being finished!

@wilburntanner10 Once again, @Krodmandoon is right (now there’s a surprise

) That version’s been downloaded over 11k times on here alone so if it did have anything nasty in it, it would have been flagged and pulled a long time ago.

@jcc309’s comment inspired me to do a few Janet images for the Ko-fi page which I’ll be posting once the last one has finished rendering. Thought I’d post one of them here.

The eagle-eyed amongst you may spot that it’s entitled ‘before’. Everyone loves a ‘before and after’ comparison, right? 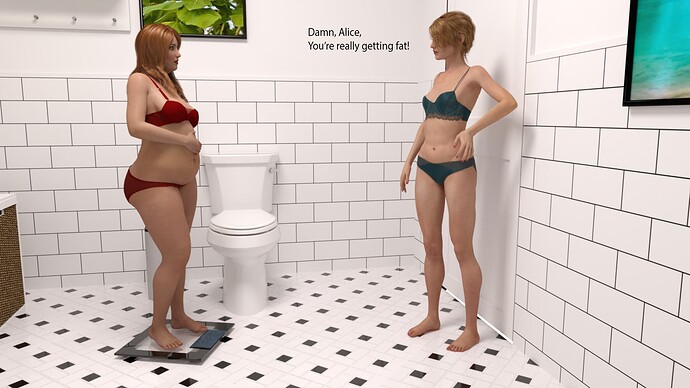 The hype that I have to see the “after” for every characters is incredible.

I’ve finally converted the Janet G3 model to G8, which means I have the full range of morphs available for her now, so you never know!

Good job evil man. Now I have images of a feeding frenzy with Janet, Alice, and Lacy…