Honestly I just picked the result I wanted cause of what I thought would fit the design but yeah if it is still like this when no one is voting that is gonna be weird.

I picked Other because I honestly can’t decide which kind of gain I like the most. If I had to make a suggestion, I’d ask for a balance between the three.

Still neck and neck between pear shape and top heavy! Apple shape is putting up a strong showing too. If the percentages stay like this, I may well end up just trying to balance all three

Hmm maybe that’d be best with Alice as the center piece. You did mention the potential for other girls. Maybe a particularly busty boss or colleague at work. Or a slim thicc yoga instructor or barmaid. Cater to some more specific tastes with side characters or something. Although each one adds to an already substantial work load.

Yeah, I’d definitely like to include other girls. But that idea came about when I was planning separate backgrounds and characters. To re-render all the scenes for more characters would really take a lot of time. I dunno, maybe as sub-plots? I’m really pleased with how the full renders are turning out, but I’ll probably end up redoing (again!) most of them at some point, as currently, there are no other characters in there at all and I’d like to add waiters, general bystanders etc.

Once again, still all WIP at this point! But to give an idea of where the images are going, below is one of the cafe scenes from the demo and the re-rendered (just finished it!) version of the same pic to replace it. 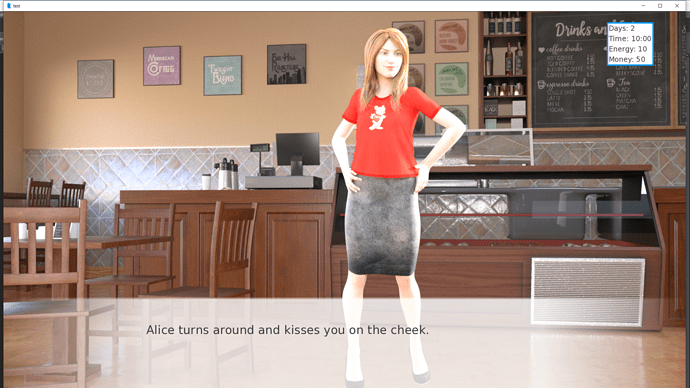 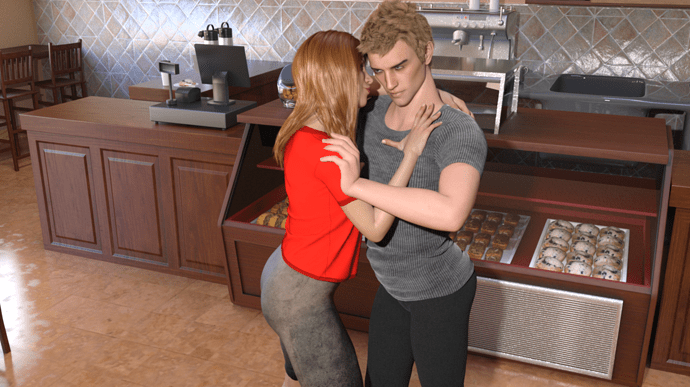 Wow, the lighting is so much better and it’s so clear to see Alice is actually in the environment as opposed to looking like she’s kinda on top of the environment.

Also interesting angles like that will really help show of her gain as she progresses in a more interesting way as opposed to the standard front view, side view, butt view you normally get (not that there’s anything wrong with that

And you’ve hit the nail on the head. With each picture being a complete render, not only will the lighting work, but I can have much more complex scenes and camera angles than the usual standard views in these sort of games. Ok, it’s going to take me a lot longer to finish the game than I originally envisaged, but it should be worth it!

Hmmmm, seeing as it’s going to take me much longer than I thought, maybe I should chance the title to ‘Worth the Weight.’

Another new poster? I should be on commission

Joking aside, it’s fantastic to have so many positive comments, whether they’re from new people or forum veterans. Really encourages me to keep going!

Poll is still pretty close! Top heavy was the early front runner, but it seems to have fallen away quite a bit.

Quick question, whatever the results of the poll end up as have you decided if the gain is going to be fairly realistically proportioned, as in say bottom heavy wins there is still a fairly big gain in belly and rest of her body, or will it be a more exaggerated gain, so vast majority of gain going to the butt for instance?

Good question! I haven’t decided fully one way or the other yet, but I’d imagine most people would prefer at least semi-realistic, so I’m leaning towards that.

I haven’t really done much in the way of test renders for her weight gain yet as that’d prove way too much of a distraction from getting the basic game up and running!

Hmmm, that’s weird. Got a notification on my phone a couple of hours ago saying there was a reply to this. I was at work so didn’t check what the reply was, but having got home and logged on, there’s nothing here. Maybe I’m hallucinating!

I’ll be taking the poll down soon, so if you haven’t voted, you’re running out of time. It’s still really close between the two front runners… although for some reason I thought top heavy would be a clear winner. I guess big boobs aren’t as popular as bellys and bums!

The poll was very close for a while, it was very interesting to see how things turned out

Yep! I’ve not had a lot of time this week (thanks, real life!), but I’ve kept logging in to check the poll. Top heavy was the early front runner by a long way, but has now very much fallen behind. So, it’s a two course, sorry horse race between apple and pear shape.

I meant to take the poll down yesterday, but votes kept trickling in, so I’ve left it up. Will definitely be taking to down tomorrow evening (UK time) though.

I don’t want to speak for anyone else but in my case, I like a gain focused on the top half and whilst the belly is preferential, I’m also into top heavy - so if I’d had voted in a rating system, it’d be 3 points to apple, then 2 to top heavy and 1 to pear. Not gonna say that the two necessarily steal each others votes but for me I’m not hugely apple or top heavy favoured, but prefer both significantly to pear. Don’t get me wrong nothing wrong with a good butt, but prefer a rounder shape overall

Either way I’m sure it’ll look great, was a big fan of how she looked sticking her tummy out for the early stage.

My personal preference has always been a pear with a large bust, to be honest.

Though there’s nothing wrong with a nice belly. Round and flabby probably is a really good way to put it, lol.

Ok, that’s the poll closed. Thanks to everyone who voted!

Looks like it’s a fairly narrow win for pear, with apple a close second. Which is fine with me as either of those two woud have been my preference! Didn’t want to say earlier for fear of biasing the vote

So… if all goes according to plan, Alice will be a little bottom heavy. She’ll still grow all over, of course! I won’t have much time the next few days, but I’m hoping to work on a few test renders of the first stage of her weight gain

And get a bit more of the game itself done too.

So… I did a few tests on the first visible signs of Alice getting heavier. Very rough, hence the poorly fitting stockings! Bearing in mind this is the very first sign of her getting visibly larger, what do you guys think? Too much? Not enough? I’m trying to draw a line between it not being noticeable and it being far too noticeable.

And, as a bonus, the fourth pic is a test render of a character (in hindsight, I think I may change the glasses!) for a potential subplot which popped into my warped mind yesterday … 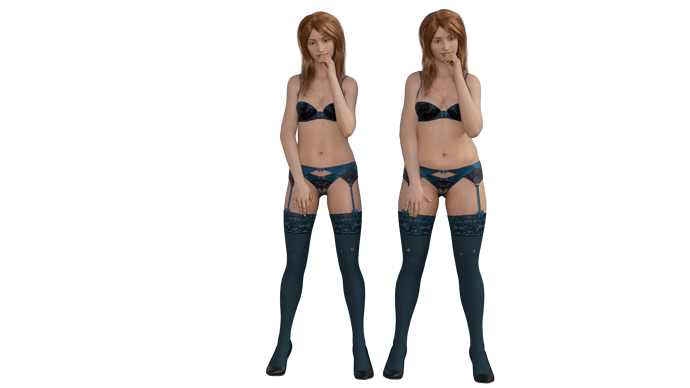 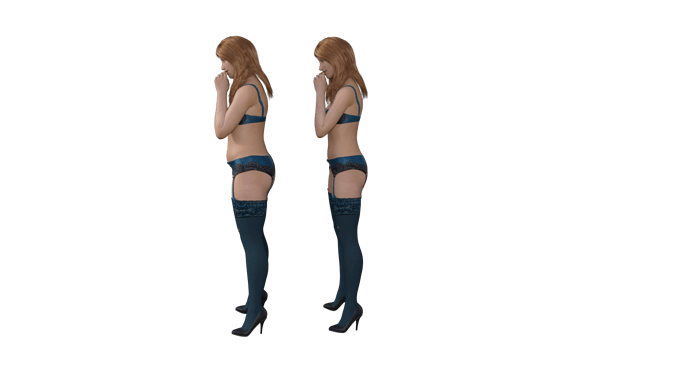 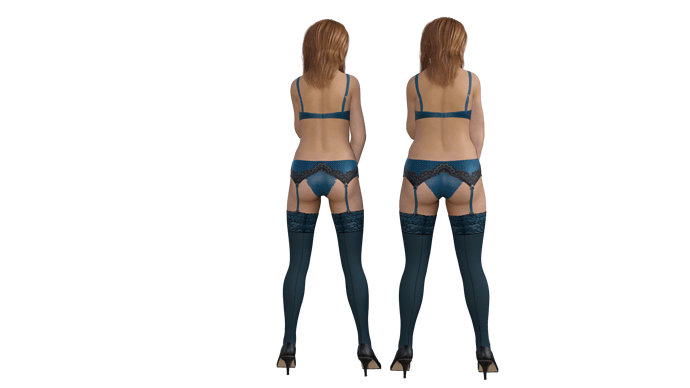 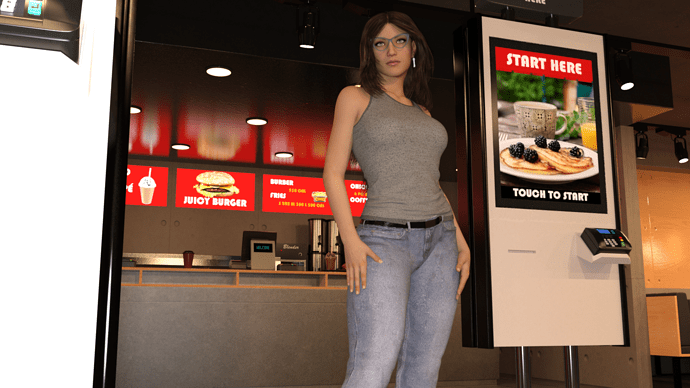 I’d say you hit what you’re aiming for. It’s certainly noticeable side by side, but still fairly slim. Small pooch, chunkier bum. Not sure if it’d be harder to see in casual clothing, might disguise the belly a bit but then if it’s not supposed to be TOO noticeable, this might be perfect. How many stages are you thinking?

Thanks! I hope I’ve got it right, but we’ll see when I start some clothed renders. It really is supposed to be barely noticeable at this point. As for how many stages there’ll be, that’s a secret! (partly cos I’m not 100% sure myself yet :p) But there will be a few, that’s for sure.

There will be a new demo fairly soon

*edit… you’ve intruiged me now. Gonna try out a clothed render too!