Been a bit since an update.

I’ve been working on coding the dinner sequence, after you beef up your cooking skills you can invite Danielle over for dinner. You will have four fun options and one less fun option.

This “day-to-day” dinner scene became more robust as I worked on it, so I cut back on one of the other scenes to make my self imposed deadline (end of month is still the goal).

The way I’ve coded things so far, I should be able to add on additional activities without needing players to start the game over (hopefully).

Right now there are three “day” activities and one “night” activity. Dinner can be either time block, but only once a day. These are all coded with images (some backgrounds missing).

And now for some eye candy. 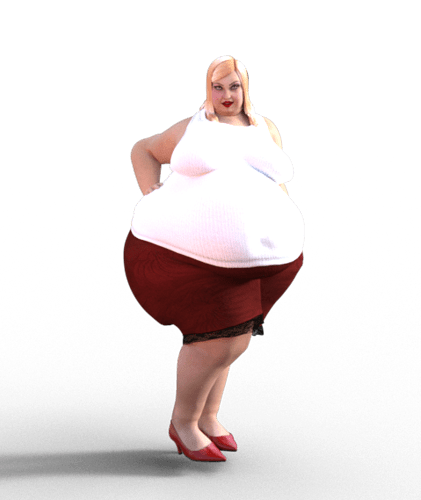 This is the starting stage for Cindy, the lead of HR of your new job, she shows you around in the beginning sequence but she’ll be gone for a while (and maybe come back bigger.) She’s a proper person, following the rules, until something or someone whets her appetite.

That’s all for now!

Cant wait.for.the demo to come out to help with bughunting (if needed)

Looking fantastic getting more excited to try it out.

I edited the first post to include the link for demo 1.0 and for my Patreon page.

I hope to churn out 2.0 before Halloween!

PS. The “Living Room” button is weird looking. Its one of the first things I’m going to fix

Love the demo i cant wait for more

Nice demo. I enjoyed to play. I will join the Patreon soon, if I see the further development.

I posted a poll on the Patreon page that is open to the public. I have three options for what I’d like to focus on for the next update.

They’ll all get hit eventually, I’m just curious to see what people would like next.

Also feel free to message me or reply here or on Patreon with thoughts//bugs/concerns.

An excellent start, I especially like how the character stills shift through multiple poses rather than each being a single static image. Hope to see more of this game in the future.

Thanks! the goal was to try and get some expression out of it without having to render a full scene. The lighting doesn’t match up with the backgrounds, but I think the effect is semi-decent.

Hey all, the poll will be closing in about 24 hours.

So far graphics are in the lead! I’ll be able to replace some of the backgrounds and maybe two character models while adding in the next stage. For replacing character models I’m thinking Danielle, obviously. And probably Cindy just because I have a soft spot for her.

I’ll probably try and add some polish since I’ve given myself a Halloween deadline.

The poll is officially closed!

Graphics won, so they’ll be some updates coming as far as graphics go.

I’ll post the new version of Danielle for everyone to see.

With that being said I have a fair amount of pre-rendered images for the Gen 1 version. I’ll probably post a few of my favs on Patreon as patron only posts.

I’ll be polishing a few things as I go. The update after Halloween will focus on polish and additional activities.

Since graphics won, here is the new and improved model for Danielle! 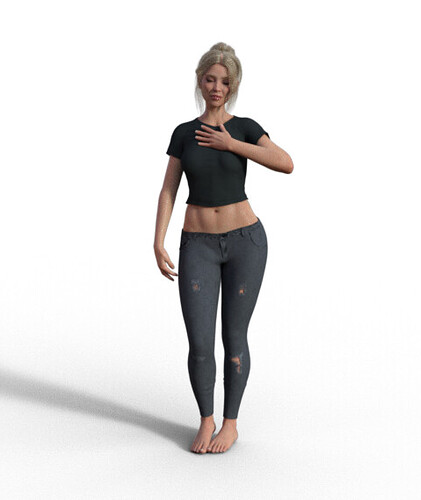 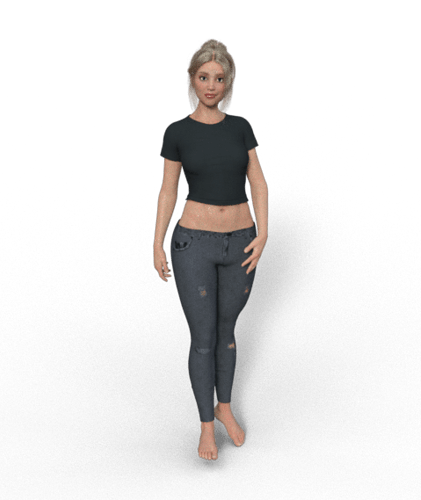 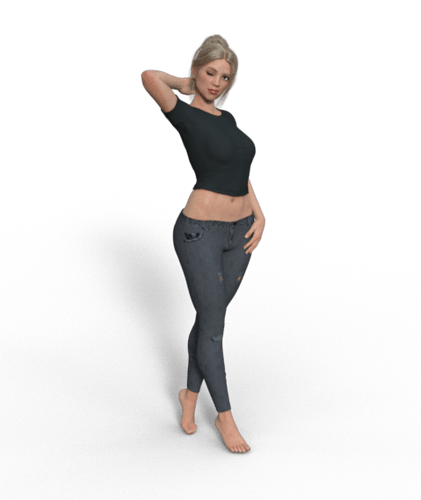 I shopped around the Daz store and settled on this model. Don’t know why but I’m digging it.

Updating this will also give greater versatility which is good. I’ll be monkeying around with some later stage images as well. Those will probably be Patron only.

Looks super good keep up the good work. Looking so much forwarded this.

These past few days I’ve rendered new background images so they’ll be more in keeping with the 2.0 version of our girl!

I also updated the sprites for Cindy to Gen8.1.

The story is coming together and so is the coding.

We should be right on track for the projected release date for the next demo.

That’s all for now!

Looks like we had some great stuff from the game jam!!

I’m still plugging away. I’ve got some more one shot full scene renders done and the next “reveal” scene in the works. I’m taking some advice and trying to make it more of a spectacle to differentiate it from the day to day activities.

One thing I found out is my graphics card is not super awesome. Trying to render a full scene with my Gen8.1 content causes Daz studio to crash.

Not to worry! I figured out a work around thanks to Google.

I can delete “off screen” stuff and boom, works like a charm.

So this hasn’t slowed me down at all and we are still looking good for the release date of Halloween!

That’s all for now,

Since I’ve upgraded to 8.1 a lot of my preliminary test images for Danielle using Gen1 are obsolete. So I’ll post a few here so people can see a bit more of the direction I was planning on taking (Nothing too spoilery): 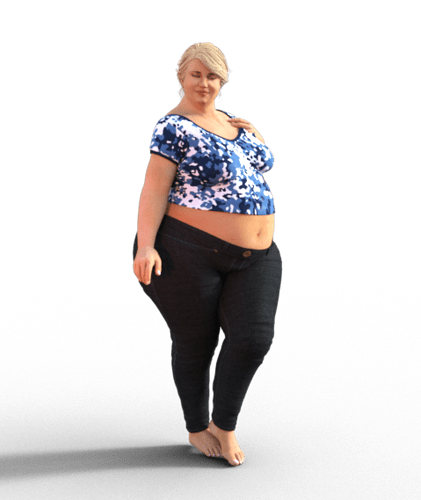 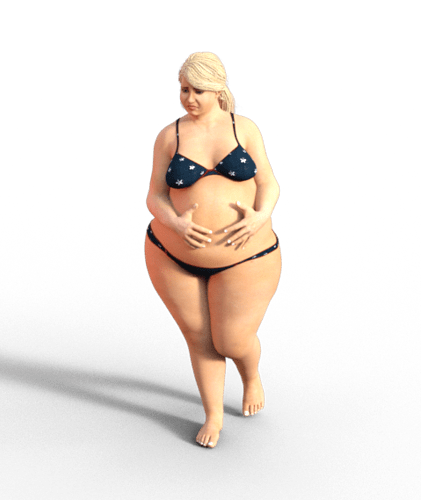 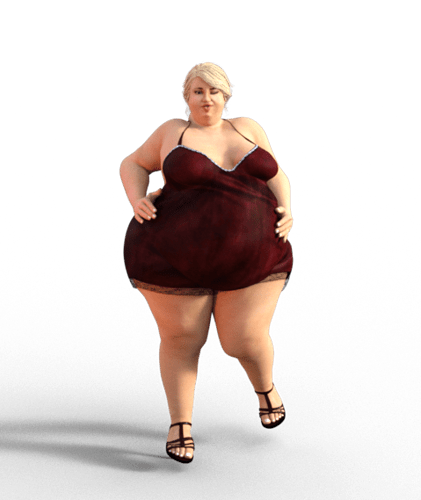 With Gen8.1 the new versions should look even better!

Hey, this seems really promising! Enjoying the writing and sprites so far. The pictures seem a little low-res at the moment though, are there plans to increase the size of pictures or is it sort of a limit with your graphics card?

Also, a few bugs I ran into while playing:

All in all, really promising demo, looking forward to seeing what’s to come.

Thanks for the bug report!

I’ll have to do some research on that “skip” function. I’m winging this whole thing, so I’ll research that and try to find a fix.

As far as things after the second weight stage, I had the beach scene in there and not much else, so the game goes off the rails at that point lol. I’ll probably put a disclaimer in there in the future.

The navigation was intended to be like navigating through the apartment, but I agree, it’s definitely cumbersome especially since there’s not much to do in the apartment besides cook and sleep. In the next update I’ll work on fixing the navigation.

The main focus for this next demo was to update the graphics, I started rendering figures (I was only able to update two figures so far) and backgrounds with Daz gen 8.1 and messed with the settings so hopefully the pictures come through a bit clearer. If not, that may just be my graphics card. I’ll keep working on this throughout the development of the game.

I had no idea about the bar scene, that should be relatively easy enough for me to fix though!

Sincerely thank you for the report, information like this will only make things better!

i guess the update game is patron only?

I’ve been thinking about that.

I’m going to give the patrons some lead time. Since they’re patrons and all.

It’ll probably be a Patreon only for a few weeks at least and up to the next update at latest.

I’m new to this so I’m feeling it out as I go, so I don’t have a concrete answer/release schedule yet.

I’m hoping to have updates every 6ish weeks though!