if you don’t know what shape keys are I’ll explain them here
they are basically a model with a slider made to make the model change its look, it can be used for facial expressions, blinking but I and probably everyone else wants to use them for weight changing.

For a starting point Manuel Bastioni lab has a pretty good base mesh with lots of options built in to work with.

that will help alot thanks

Just give me your base female model and I will make a shape keys for you.

I’ve sent you an FBX file hopefully it works

I can see only a link on my google drive.

Can you send me textures too? At least for body. That would help to create details on nipples and belly.

I’ve sent you all the textures just in case

Made this Blender shapekey when I considered making a wg game for no good reason. Unfortunately, I ended up using that game base for something else. Noticed the model still in my backups and this seems like the perfect topic to drop it. It is set up for easy export into Unreal Engine, but you’ll probably have to rebuild each material after import. It should also be compatible with the UE4 skeleton but you’ll need to know how to retarget and designate the bind pose. The materials are a mess since I DLed the model off some youtube link, it was set up for Cinema 4D and I was working fast moving it over to Blender.

Some elf model off Bless MMO

Blender version: 2.79b, textures should all be packed allowing them to be saved off the file

thanks this would help for an rpg like game

Reviving this because I am looking for some shape key tutorials. Also wondering how people handle breasts and bellies when doing shape keys. Are they modeled separately? I’d like to see some examples of people’s final meshes.

Is it recommended to start at the lowest weight base and then move up or is it okay to start with the highest?

what I usually do is sculpt 2 models, the biggest/fattest and smallest. then when I re-topologize it I do it on the biggest model (so the biggest is the base) because it requires more polygons than the small one and then make a shape key for the smaller size.

I sometimes split the bigger sculpt into parts (torso, legs, arms, etc) just so I can hide parts of the model easily and to make sculpting some parts easier as well (so they don’t “melt together”). 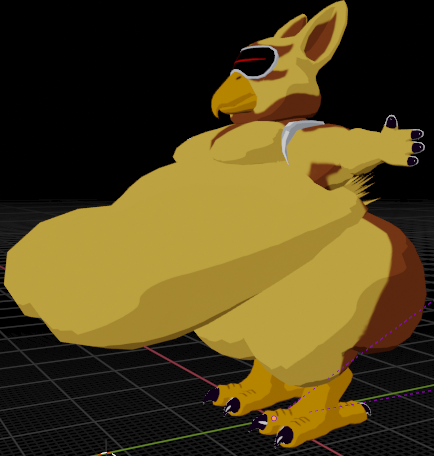 I find it helps with rigging. it is basically T-posing the fat so it deforms better when posing

Your responses are a big help and you’ve given me some good direction on where to go next. So I will retopo the larger model, then sculpt the smallest model and use that as the basis for the thin shape key. I will want to separate the thighs, belly, and breast meshes from one another so I can individually sculpt and retopo them.

Are there any benefits to doing middle-way models that are between the fattest and thinnest?

Regarding “T-Posing the fat” is this something you do after you retopo? I don’t think I could sculpt the fat well if I had to pose it in such an unnatural position to start with. Also why does T-posing the fat help?

Are there any benefits to doing middle-way models that are between the fattest and thinnest?

most of the time I would say no (your model would not benefit I would say). basically when going from fat to blob it can be useful because some new folds develop at those types of sizes. having 2 keys in that situation can make for better transitions so the “blob folds” don’t show up when fat for example.

Regarding “T-Posing the fat” is this something you do after you retopo? I don’t think I could sculpt the fat well if I had to pose it in such an unnatural position to start with. Also why does T-posing the fat help?

I do that when sculpting. I make a quick “size reference” in a more natural pose and then use that to help sculpt out the T-posed one. I find that it helps because it is easy to pose it into a normal resting pose and I get some better range of motion since I won’t have to “fight” against a built in rest pose.
but if you know that your character wont need much range of motion there then it is fine. also I think this matters more the bigger the belly or whatever is. just a little pudge can’t move much compared to a belly like the one I posted