A Growing Queendom - A weight gain based empire building game

Quick update: I now have 22 out of the 59 provinces in the in-game map. Here is a screenshot. I can’t wait to finish the map so I can start working on the parts of the game that are more interesting to talk about. 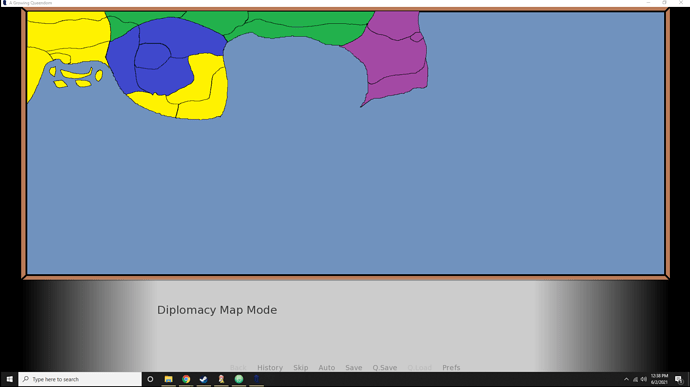 Heyya folks, Skinny_Guy here! I’m part of the Growing Queendom team now and I figured I’d let everyone know that we’ve got an artist onboard for the Queens! I’ll do my best to keep everyone here updated as progress continues behind the scenes

This definitely looks like a cool project! I am a huge fan of strategy games!

I have recently been working on some parts of the game that are not the map, so I have an idea of how some new mechanics will work. I now have an idea for what the diplomacy screen will be like for when you are talking with a ruler of another country.

There will be options to declare war and negotiate trade, as you would expect, but a new feature I plan on having in the game is the option to talk cordially with the ruler in order to increase the nation’s opinion of your nation, or to insult them, lowering their opinion of your nation. Opinion will affect AI in a few ways, making them less likely to accept trade deals and more likely to declare war. To make it so insulting will have a purpose, having low relations with one country will raise opinion with its rival and probably make truces between the two countries following a war shorter.

Adding in the talk cordially and insult options will allow for the opposing rulers to show their personalities more often.

Another announcement I want to make is that the brown colored nation will now be a Native-American inspired nation with unique mechanics. They will be nomadic, and always only have 1 province. They will move their country from province to province on their continent, and if other nations start inhabiting those squares, they will become upset with those nations. The weight gain arc for their leader involves them becoming sedentary as they lose the ability to migrate from province to province, and certain foods from other continents can lead to further weight gain.

Is it possible to capture leaders or other significant people in other nations, and perhaps have them in your prison where you could do any number of things to them. Could lead to some interesting plays where the people could lose faith in their ruler if they gained copious amounts of weight while imprisoned (or perhaps, you know other awful ways of dealing with dissent).

Having the leaders imprisoned in game could cause a bunch of issues that would take a lot of work to fix (Like there would need to be a character for each nation who runs the country while the ruler is in jail that needs artwork) but I think will add a model viewer themed as a prison where it lets you look at rulers at the different weights they reached in campaigns they were defeated in. (Like if they reached weight 3 and their nation was conquered by you in a game, you can view that leader at weight 1, 2, and 3).

I’m not sure if I missed it, or it hasn’t come up yet, what’s the maximum weight stage?

There will be 3 stages per character

How will the end game look, after successfully conquering every territory there may not be anything else to do other then to govern (unless its the win condition then I can see it being the case).

My thinking was there would be a limited number of turns before you reach a game over screen and that the time limit would make it very hard to actually conquer all territory in one game. I was planning on making it so that you would have to play through the game a few times to see all of the rulers and characters gain weight.

If you did conquer the whole world, you would still have to manage the estates to make sure you don’t get violently overthrown by them, but there should not be much downtime where you have the whole world conquered and are just waiting for the game to end.

Have you given any thought to making more of the nations playable? It sounds like you have a lot of cool ideas for all the nations but people will only get a chance to see them all in action from the outside.

That does sound like a really cool idea! Me and Falcon were tossing around a similar idea behind the scenes. Personally I would love to do something like that, but we can only do so much. We’ll discuss this behind the scenes, but the main issue I see with letting the player pick from every nation is that we’d then have to write nine different scripts and dialogs from nine different perspectives, and balance the game around this change. We’d also have to change how the weight gain system works. I do however see a Civ V style system working here, but we’d have to change a lot of work we’ve done behind the scenes

Thanks for responding so quickly. I personally have no idea how to code so I never know how hard the thing I’m suggesting is. I do know it would add a lot of replayability and depth to the game if that was something you wanted. Honestly this sounds like a project I would be interested in joining if I knew how to code.

Maybe perhaps make it so that the early nations are sort of equal in the beginning, that way it doesn’t immediately get out of hand when certain things start to snowball. Late game is going to usually be a challenge, so just making perhaps the start and halfway between start and midgame could be where the nations start to pick up their full traits (could prevent possible hard a.i. from rushing to quickly for early domination).
Meanwhile the script could possibly be copied, or allow more generic responses to certain events or actions.

An idea I am entertaining currently is I might make the part of the game about managing your estates be much more limited or cut from the game entirely. The reason for this is currently, if you give the burgher class a bunch of food resources, the girl who speaks on behalf of the burghers in court gets fat. Since there is artwork depicting this, the girl could only be from one culture because drawing 9 different girls for each estate at multiple weights is way too much artwork. If this system was reworked and the artwork cut, then playing other nations would be more towards the realm of possibility.

Also, maybe this is just because this is what I am working on right now, but I feel like the other nations and their rulers are more interesting than the characters who represent the estates.

Yeah, for me I’m getting a Civilization V vibe from all the foreign rulers (in a good way), with some being more aggressive than others and all of them having their own personality. So if we do end up changing the design I can see how it would work

Yeah the migrating tribe mechanic really caught my attention as something very interesting that would be cool to play through. Also who doesn’t want to play fat Mongolian Khan waifu?

Small update: I have decided to redraw some borders and add 2 new nations to the game. The first is a nation who lives on a series of small, highly volcanic islands who have scarce food resources but will trade valuable materials in exchange for food at lower rates than most nations. They will have a prefered type of food they will trade at even lower rates for, and their leader will get addicted to the food, allowing you to renegotiate trade deals so they are even more in your favor. The leader’s weight stage will be determined by how much food they receive each turn. If they are not meeting their food requirements, the leader will lose 1 weight stage per turn. If the food requirements for the next weight stage are met, they will advance 1 weight stage per turn.

We are still working on brainstorming ideas for the second nation, but the idea is they will be inspired by Japan. An idea I plan on including is that when they get war declared on them, there is a chance a tsunami wipes out the enemy’s navy. Everyone on the team is kind of busy at the moment, but when our schedules are more free, we will figure out what the weight gain elements of the leader will be like.