The basic concept so far is this: in the game’s world being bigger/heavier = higher social status wether that be by stuffing, inflation or weight gain.
larger people get better houses, cars (if they can fit in them XD), respect and jobs.
there’s an annual weigh in where everyone gets assesed for their weight/size class. If you fall out of your weight class, or someone overtakes you, you get demoted in the world and leveled down to worse housing and someone else takes your place.

The idea is that you would essentially start as a poor skinny girl and your goal is to rise up the social ladder by stuffing, gaining weight and/or inflating you will gain access to money and thus better food the higher your social status is. I’m thinking it could take the form of something between an RPG and a visual novel, airing more on the RPG side, some turn based combat may also fall into play(your size/weight would also come into play in combat).

I think this has some potential for some fun progression

Some mechanics would include:

Some other possible mechanics which may be less likely to be implemented:

Here I’ve sketched up an idea for the UI 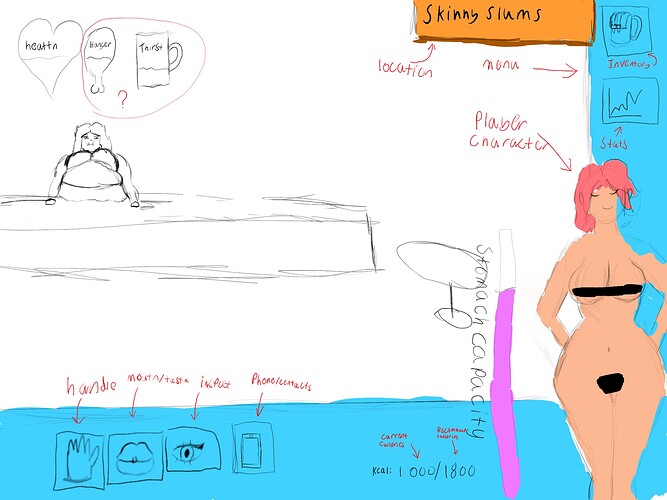 If anyone is interested in helping me bring this to life, please let me know!