I’m still not sure how I ended up in this situation. In the month or two leading up to the jam, I was so sure I wouldn’t end up making anything. After all, I didn’t have the time, or any good ideas. I was more than content to just let the jam come and go and play some interesting games.

However, a combination of an idea I got from a game that was recently put out, the jam’s theme, and an old project that was collecting dust ended up giving me an idea, and the motivation, to put something out. So, here’s my submission: Adventurer Feeding Project.

The first thing that needs to be understood about my submission is that this is more of a pre-pre alpha version of something much bigger I want to make. This started as just a jam submission, but as I worked on it I realized that this had the potential to be something much more in-depth. Once the jam ends, I’m going to take a break from this and try to get some support for it going (and maybe an artist, we’ll see). Think of this as a vertical slice of what I want to achieve with this thing.

That being said, It’s not actually done yet. I’m still working on it a bit, as you will see by the fact that there’s no story. Right now, it’s just a test room with some enemies to fight and the characters all have place-holder names. There isn’t any actual weight gain in it yet either. Well, at least not visually. The characters do gain weight, you just don’t see it. Though, I’ll get to that when I talk about the game’s mechanics. I’m putting this out now 'cause I need a tiny break from this thing, and that’s a great time to get some feedback going for it.

So, after that whole wall of text, it’s time to write another wall of text about the mechanics. This may seem unnecessary – after all, it’s just a RPG maker game, but uh, haha…ha…

I HIGHLY recommend reading the following before playing the game so that you actually know what’s going on in the game, 'cause there’s a lot to take in.

Alright, so, where to start…

Adventure Feeding Project is a game where you take control of a maid character with a love for all things cute and fat. This is the only character you control despite the fact that you travel with two adventuring companions. The two adventurers are controlled by AI, however, that doesn’t mean you can’t influence them.

The adventurer’s actions is determined by how much TP they have. Each skill costs either 10%, 20%, 40%, 60%, 80%, or 100% of their TP. The adventurers will ALWAYS use the highest costing skill on a given turn, meaning that you can influence their actions by carefully controlling how much TP they have. The way you do this, of course, is by feeding them food. Certain foods have different TP values, meaning that you have to control exactly what you give them to get certain skills. Also, every time you feed an adventurer, they will gain a “digesting” debuff that prevents them from using skills for a time. This ensures that you can feed each adventurer multiple items without having them use a skill before you’re ready. However, if you want to have them use the skill sooner, you can use the belly rub spell to remove/prevent the digest state and have them use a skill on the next possible turn. However, if you feed an adventurer beyond their stamina capacity, all of that stamina will convert into weight, and they’ll enter a food coma state. In this state, all stamina is turned into fat and the adventurer cannot do anything.

Also, it should be noted that food doesn’t just give stamina, depending on the food type, it can also give HP, MP, Weight, and produce other effects.

Speaking of weight, weight is a major part of the game’s mechanics as well. As each adventurer gets fatter and fatter, some of their skills are replaced with others, which produce drastically different effects. This means that, depending on the encounter, it could be more advantageous to be fatter or thinner. Though, careful not to make the adventurers immobile. They can’t do much at that point.

Another point to keep in mind is that the game does not follow the typical RPG maker battle order. Instead, it follows a turn-queue system where a battler’s place in the queue is determined by their agility. This queue can also be manipulated in 2 key ways.

First, some skills in the game have a charging time. This means that an action will take place later than it is selected, as noted in the turn order by an orange background. Charging enemies also have a nice animation around them during the charge. This is usually the case with spells. However, some actions have the “Break” property, which cancels any charged actions. **Note, this is slightly bugged visually. It often takes a turn or two for the game to update and realize that the charge was canceled. However, mechanically, it works fine. The battler will not cast if it was canceled.

Second, some attacks have the “turn delay” property, which causes a target’s turn to be delayed by an amount. This can be helpful in order to position allies to have a turn before a particularly dangerous enemy.

That about covers the basic mechanics. I encourage everyone to mess around with the combat for a bit to feel it out and try to break things as much as you can. This is really unbalanced right now, keep in mind, but that’s part of why I want people to get a feel for it. I need to figure out a good direction for balancing the game and all that stuff.

Hope everyone enjoys it to some extent. And please, let me know what you think and what could be done to make it better. Though, I understand that there’s not much to go on here. 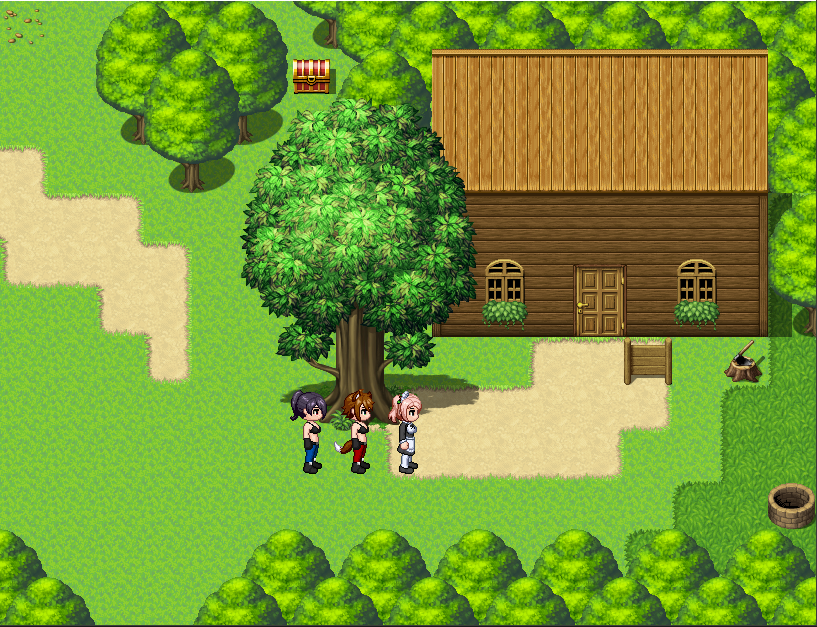 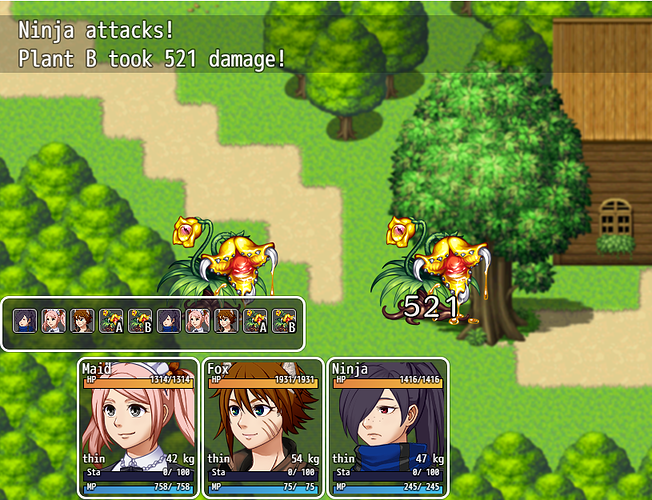 Added a new link because someone was having trouble with mediafire; however, I have not edited the game files at all, 'cause I did this after the jam closed. Also, added some preview pics.

Interesting system. I’m curious to see where this goes. I’m tempted to offer some help with sprites, but idk if I’ll have time. If I get the chance, should I see if I can edit some sprites and upload what I make to see if you want to use it?

I have some templates for fats already, though they aren’t really completely to my liking. Even my current sprites could be better. In fact, the two adventurers aren’t actually done. The fox girl should have a jacket, and the Ninja girl should have a completely different outfit. I just threw those together to have something done so that I could start with the combat system.

If I get a chance to crack down on some edits here, I may try and touch up the sprites and see if I can get them closer to that vision before attemting the gain stages. I need the practice anyway.

if you want, I can send what the fox girl looks like with the jacket, but I’m not particularly attached to any of the sprite work I’v done. I’d also rather get rid of the RPG maker heads. I only did that to save time.

Feel free to DM me and I might see what I can do. I can also get rid of the giant baby heads if you like.

AI controlled party members!?!?! Holy shit! Like miitopia?! NICE!
…
Well, I finished reading, and I’m hyped! This has a TON of potential, that’d I’d love to see realised! I’d love to help, but I don’t know what I could do(especially if you used MV, I still only have VX Ace).

I think this is really good so far, though it would be nice to be able to view your companions skills during combat. As it is it’s pretty hard to remember who does what at what stage.

I’m looking forward to how this is going.

Ah, and we can feed ourselves as well.

Yes, the main reason why is to heal the Maid when she gets hit. Though, I’m thinking of making cuddle heal as well. We’ll see.

However, if you try feeding the maid food, you may notice that she doesn’t really gain much of anything. In fact, I don’t think any of the items in the chest atm can make her bigger. There’s a story reason for this, and it was done intentionally (had to whip up some custom code for that). I’m not quite happy with how the Maid is handled with the food mechanics right now, but I think I’ve gotten it good enough for now. I just made it so that she can’t get the digestion state from eating and doesn’t get TP either, so that’ll be in the next version.

Well she got the digestion state from the slime. I couldn’t use skills.

Yeah, I just fixed that in my build. I haven’t uploaded any changes yet, so that’s still a thing.

I can definitely see potential here, I like that the skills change as they gain weight that is a very nice touch, but I really think that seeing the party members skills and how much they cost is basically essential, especially since tp costs change as they gain weight, also on a minor note, I think that the guard command should be at the bottom of the battle menu, I hit it many times accidently when moving through the menu, I am of course very excited to see the sprites, here’s my final suggestion and that is to slow down the battle speed, I could barely read what attacks were happening, I only barely saw the slimes feed attack. again very interested in this project and will look forward towards the updates.

also, it would be amazing if they had battles cries for different weight levels

I definitely agree with you on all these points. I want to do all of this, but I’m not sure if some of them are feasible, particularly the speed one. I’m not sure about how RPG maker handles it’s speed. Regardless, I’m going to see what I can do about these things in future iterations. Probably won’t get all that done in time to finish the jam, but it’ll be a work in progress.

Not sure what you meant with the battle cries though.

like when a character uses a skill they have a chance of having a text box appear, stuff like “Let’s eat after this” or “Face my Gargantuan ass”, like don’t make the characters be just skills, I’m not sure if that’s possible to implement but I think it would be fun

Hmm… Not sure if that would end up fitting for what I have in mind, but we’ll see. I haven’t really thought too much about the story yet, just some vague feelings and ideas.

I really like the core idea and combat. looking forward to the finished product.