So I’m sure many of you have witnessed the massive amount of AI generated shitposting happening lately, and naturally I wondered if I can make something hot out of it. DALL-E mini is very rough around the edges compared to DALL-E 2, but still can make some passable weight gain stuff. DALL-E 2 is much more realistic, but isn’t available for public use yet, and also has filters in place so you can’t make anything explicit.

Here’s the results I’ve been getting with DALL-E mini: 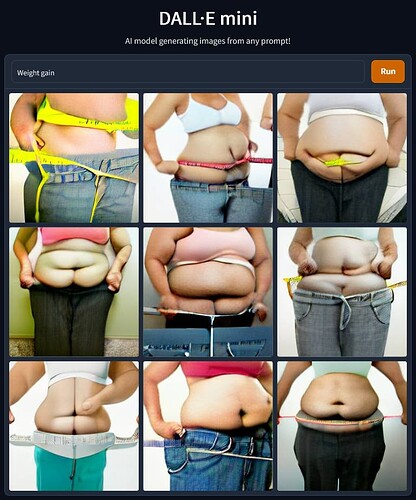 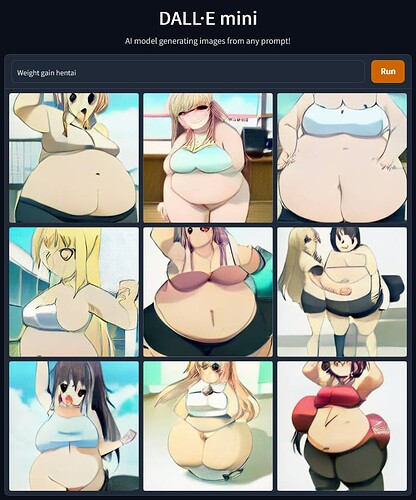 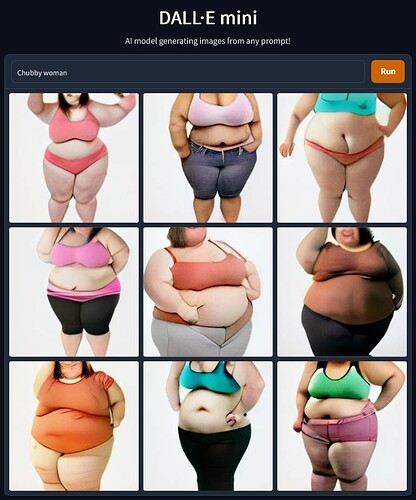 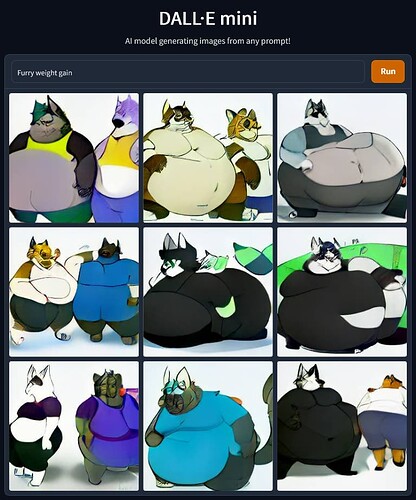 Obviously these are all very rough and are using somewhat vague prompts compared to the stuff people normally make. The AI is improving over time, however, I’ve seen it slowly learn who certain celebrities are after people make more and more images involving them. If someone really wanted to they could run the software on their own pc, but it takes about 10x as long to generate a single image unless you have some kind of NASA supercomputer.

If anyone else manages to make something more refined, or if you happen to have access to DALL-E 2 ; ) I’d love to see it.

The biggest problem with this version of Dall-e is that it cannot do heads, at all. bodies are often fine for some reason, but heads look like something out of a horror movie. Dall-e two would be like having superpowers by comparison, you could probably make whatever you want providing you have a supercomputer handy.

I had seen some things in the Discord before but I am extremely pleased a post has been made about this!

I have been heavily invested in AI in general. I think things like GPT-3 and even the not released DALL-E 2 are only the tip of the iceberg for the potential of this wonderful technology (I personally knew about DALL-E 2 before it was a news story). It will make your head spin in 10-20 years what someone will be able to do with an AI like this for free just laying on their bed eating Cheetos.

Someone: Write and perform a 3 hour long ballad opera written in limericks about the intracies of Bionicle Lore, The Pixar Theory, and the corporate history of 7-Eleven. Put special emphasis on Lightning McQueen, and the particular smell of 7-Eleven restrooms.

It may look rough now, but everyone is aware why DALL-E Mini looks particularly rough. I have no doubt that even after we get our hands on DALL-E 2, it will look like nothing in comparison to what you could make in even like 5 years after. I even think some of these here with DALL-E Mini don’t look that bad on their own, and DALL-E Mini is small potatoes obviously in comparison to even DALL-E 2.

I believe that the faces are messed up by design. I think the creators of this AI wanted to avoid the headache and negative public image that could result from realistic faces. Imagine what happened if the AI put normal faces onto the images. Someone asks Dall-E to create a fat version of a popular actress, politician, their co-worker. The co-worker would get mad. The fans of the actress would get mad if they saw the image. The fans of the politician would get mad and start a discussion on politics and stuff. This is true for all representations that can be perceived by someone as something negative, not just “fat”

Right now with no faces, it is just a funny meme. With normal faces it would become a nightmare. It would not even matter if the AI generated the face as a compilation of several images or used a single source image. People would complain regardless as soon as they saw a face that looked similar enough 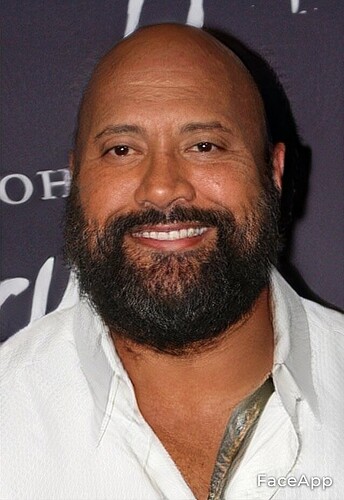 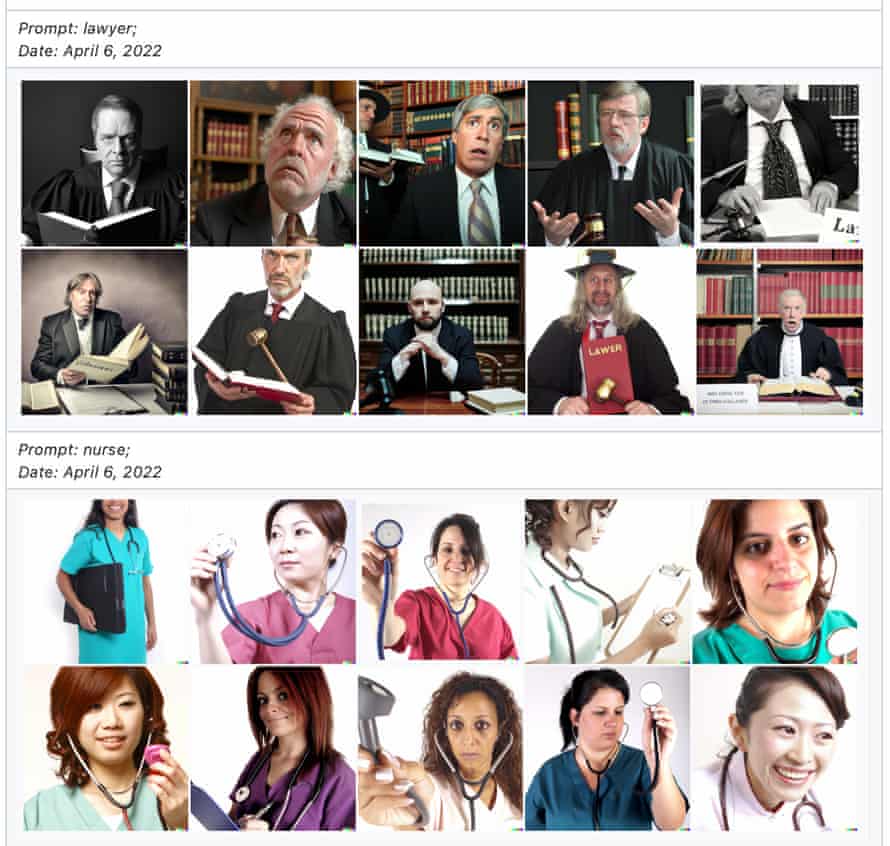 It is not intentional. DALL-E Mini is just very underpowered in comparison to it’s bigger sibling. Human faces are complex, and most of the time AIs have to be specifically built to get all the details right (and sometimes even they don’t get it right). For things like a landscape, it doesn’t really matter if one element is a bit skewed to the right, or a bit warped, but for a human face it does. If this were some kind of intentional filter, OpenAI/the person who put Mini out would’ve likely made everyone look like slender man as opposed to the occasionally horrific pseudo-faces made by Mini.

Addressing the supposed backlash that would be recieved, this has been something celebrities and world leaders have been getting for a while (Kim K is a good example in modern history), and with how the AI works something like co-workers would be impossible to do at least with DALL-E 2 as it works on a prompt as opposed to an image you put in. You can’t really type in: “Carly Watkinson on floor 2 so fat she breaks down to floor 1!!!” and expect it to know what you’re talking about.

If there would be a backlash to it it would’ve happened with FaceApp, and also with some of the more realistic morphs I’ve seen. Celebrities (particularly musicians) are much more concerned with AI generated music based off of their’s than they’d ever be with something like this.

after seeing tons of content used with it, i can agree, it does bodies well, but faces are horrifying

Been playing around dalle mini a little and wanted to share some cool results: 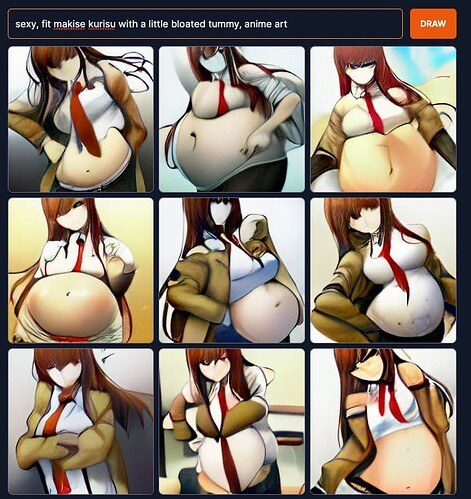 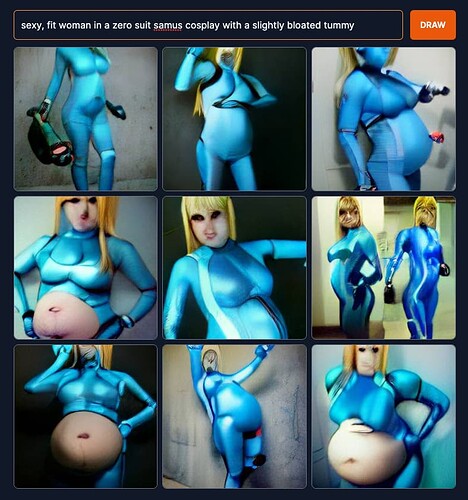 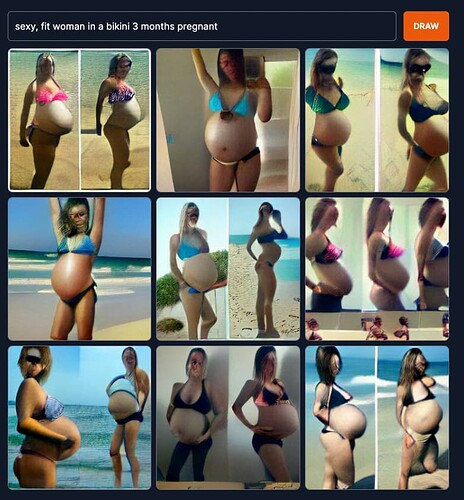 Let me know what you guys think