So on games where the game comes in an html file and there are resources that need to be loaded on my side they don’t load. To demonstrate I’m going to show FC pregmod but it doesn’t work for any twine game.

I’ve tried everything I could think of. Using different browsers (I tried firefox, chrome and brave), moving the game to another drive, clearing cookies, changing the directory, loosening security settings on firefox, trying to use the console on firefox to diagnose the problem. Nothing works.

And the worst part is I can’t find anyone who ran into the same issue I’m having. 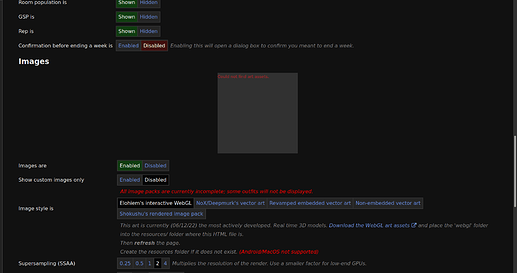 You followed the instructions to install that model pack, right? Download the zip from MEGA, extract the webgl folder, and place that entire folder inside the resources directory. resources should be an otherwise-empty folder next to (in the same directory as) FC_Pregmod.html. This works for me with Firefox on Arch Linux, although it seems a bit slow - it’s probably using my CPU for rendering the models.

Have you clicked on the other graphics packages? The NoX and revamped vector art packages seem to be embedded directly into the html file and work fine for me.

I followed those steps, its a no go for me.

Where did you out the game?

I’ve tested three different versions of the game - the last modded version of 0.3 from this thread, the 4.0.0-alpha.21 version from the releases section, and a bleeding-edge version built from the most recent git pushes. Aside from the fact that they all needed separate webgl resource packs, and would give version mismatch errors otherwise, they appeared to load, at least in the settings page.

The error you’re getting seems to imply that the browser isn’t finding the asset packs; there’d be some other error if it were a version mismatch or if your hardware or browser version didn’t properly support WebGL. If you’re 100% certain the image pack has been extracted to the proper place, make sure your local user account has permissions and ownership over the game directories and files. I’m guessing you’re not using a Flatpak-based browser or anything else that’s locked down or sandboxed more than usual, but if you are, make sure it has permissions for the game folder and subfolders. I’m also not certain how any of this pertains to you not being able to load images in other Twine-based games, as the embedded ones here seem to work and most Twine games also seem to embed their own images.

I think all of the browsers I tested it on were flatpak based browser. So thanks to your hint I managed managed to install brave via distrobox and it works as it should now.

I should have mentioned this before but I am running arch linux.