I’m surprised that no one has mentioned any thing related to minecraft in here.

Minecraft isn’t the best game to mod for fetish content because of how inhumanly blocky the player model is. If there was a good mod for replacing the default player model with something more shapely, I think the game would have great potential for modding.

Eka’s Portal has (had? IDK) a vore-themed modpack and server, but yeah, Minecraft is a terrible game to try to stick fetish stuff into.

There IS a mod that replaces player model with whatever you want. It actually lets you use custom animations as well. It does stick out like crazy as a result and it hasn’t been updated for latest versions, but it’s functional. 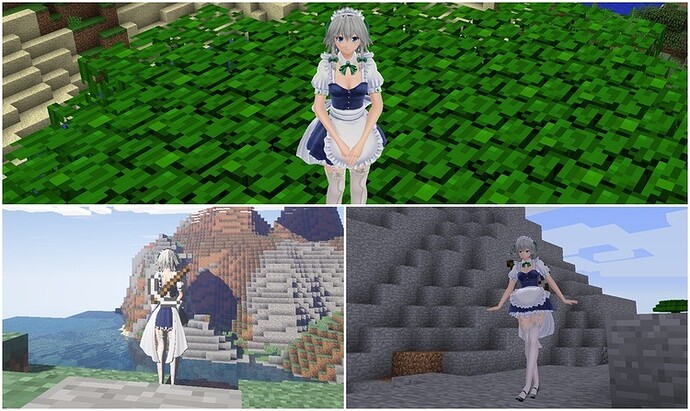 Interesting. If I was at all competent with programming, I would try to make a WG mod with it as a foundational base. With that, I would be willing to pay to help someone develop such a mod.

Another example of a mod for player models would be the moreplayermodels mod, its been around for a while. Outside of the blocky theme, i see no reason this could not be done. The real problem i see with Minecraft is how fast it moves through versions. Sustaining a mod across time and versions takes effort and commitment.

Modders have already made a “solution” to this issue. They all just collectively agreed to stick with 12.2.2. It’s a stable, new-ish version of Minecraft that has pretty much every mod you could want. If we made such a mod, we would only have to mae it for 12.2.2.

Uh you mean 1.12.2.2, Minecraft is still on version 1.something, unless I’m mistaken. I got into the modding seen with Minecraft version 1.2 then the next version most mods supported was 1.4(My personal favorite due to RedPower 2 Mod, FTB Ultimate mod-pack containing it was amazing, totally recommend playing that mod pack if you haven’t) as i remember then i think was 1.6, then 1.7, then 1.10, then 1.12, and now it looks like 1.16 will be the new 1.12. It takes time to move everything forward so as usual some skip a subversion or two. Most mod developers stick to the same subversions, so they can be played with each other. There not going to stick to 1.12 indefinitely. Mods like JEI, Biomes O’ Plenty, Botania, Chisel and Bits and many more already have been updated, along with the first mod-packs for 1.16 are surfacing. Like the Direwolf 20 1.16 and FTB Unstable 1.16.

I think their already is.

There is a WG mod for what it’s worth (it is blocky and I have no idea how it actually functions), but it would probably be easier to swap the model entirely under certain conditions.
For the record, the mod shown above uses unmodified MMD models.

I just drop the “1” when discussing Minecraft versions, as I don’t think Mojang is going to make Minecraft 2.0 anytime soon. Regardless, if this weight gain mod had a patreon, I’m sure whoever develops such a mod could justify keeping it up do date, so long as the patreon money keeps on coming in.

Closest thing to a fetish mod for Minecraft I can remember is a 3D animation creator called Mineimator, but you have to go through a paywall to unlock the good stuff.