Anyone got a favorite or best recommendation on skin packs, specifically wetness/sweat etc? I suppose I'm interested in wetness skin bundles/packs OR just free bump maps for sweat droplet decals. Edit: Or heck any other super specific tips for daz :)

Anyone got a favorite or best recommendation on skin packs, specifically wetness/sweat etc? I suppose I’m interested in wetness skin bundles/packs OR just free bump maps for sweat droplet decals.

Here’s generic girl, from another thread, this time, I ran the render about halfway between blurry mess and 2hour waste of time on my 970gtx, only this time I added wetness with the glossy options in the default iray shader in genesis8.

TL;DR daz3d generic weight gain girl never sweats when she works out. There are skin packs for sweat bead droplet bump maps. But I have no clue which is best, or even if free alternatives are useful/good. I just thought of this today.

Example of the sort of effect I mean: Warning, random thin elf. 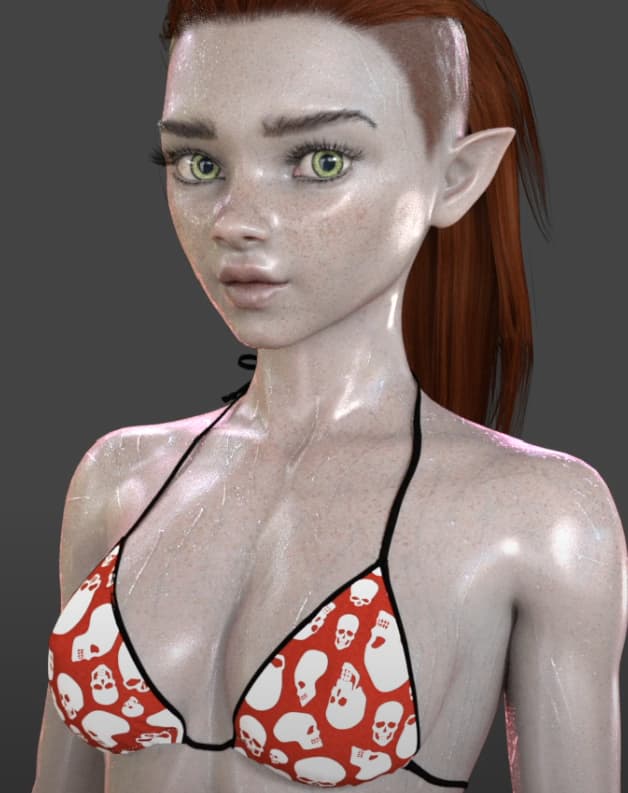 This is the Daz add-on that I use for the pool scenes in Queendom of Corpula:

<p>Iray WetFX 2 is a large collection of all things wet. Including a wide range of decals for all manner of surfaces, Morphable liquid meshes, wet skin geoshells and a selection of overlay shaders that can surfaces wet and even see-through if needs...

It works well for the renders I’ve done and has a lot of customization for droplets. Hope this helps!

Not having any scene other than lots of lights makes renders easily 10times faster than having a room a figure is in. (Also 4gb vram is no issue in this case. So I think I understand why some vn authors are using sprites instead of scenes, it’s because they also have a 5+ year old gpu like me and the scenes are essentially literally impossible to render.)

Of course that was boring so I gave her a random pose and I randomly experimented with gloss settings that I wasn’t checking the guide’s numbers on, and random specularity dual lobe settings that I know also do wetness but I’ve never even seen a guide on anywhere at all

It took much longer, probably because of the dual lobe specularity settings.

Given that conclusion, I probably won’t buy any paid wetness tools or assets until/if/when I obtain a gpu that’s not 7 years old.

Edit: She doesn’t actually look more wet in the second image, my guess is because the studio may have been using my old wetness settings from last week as a baseline? I’m not sure I’ll have to a) look into that b) reference that guide I had.

edit2: Yeah, she’s wet in image1 because my renderer skin surface settings carried over from the previous scene, that’s weird, I wonder if there’s anyway to reset them, I guess, in theory, it’s nice you don’t have to re-enter dozens of settings for each new scene though. hmm.

‘Accidentally wet sara’ above has catchlights that I’m not even sure which light they’re coming from, this pose disables the catchlights because he’s looking down, and I spun her around like 45 degrees or some such, so the catchlight is no longer shining on her face, which I dislike. Also the hands were a bitch, so I gave up on making them get anywhere near the stomach. The fingers are wrong, so that if the palm gets close the fingers all clip, in theory it could be fixed, by someone with the patience of a saint, but I’m hoping the lack of depth perception tricks the viewer into thinking they’re not so badly aligned

Testing manually turning off the wetness settings again and seeing if they stay off/on/etc.

She’s extremely pregnant, and I wanted her breasts to rest on her belly, but I couldn’t make it happen without cartoonish proportions. Would likely work better siting down, but well, sitting down doesn’t work so easily once you create nonstandard proportions like this. Heck, I wonder how tiggertoo’s alice EVER sits down. I guess with clothes on it would cover body parts clipping into each other, but alice sits without a shirt on often.

wetfx2 looks pretty good, but seems to take me many hours extra render time, won’t be able to test and learn how to do it until I have a new gpu. It’s not that it adds much of a load to the scene, but the effect is so subtle it won’t appear on low quality renders.

I also spent extra time making a girl for this one. She’s a thigh monster

conclusions: meh + sweat and wetness adds a LOT OF TIME to renders. OR upgrading from daz4.15 to daz4.21 made them a LOT SLOWER.

Will resume sweat tests. once I have a new modern gpu. and not this 970.

below, attempting to have girls struggle to put on pants, didn’t line up the hands well. faces look hideous. photos blurry because the renders were like 1% quality.

This is another 3d renderer feature I don’t have a clue how to do on fat girls and is important IMO to our genre.