recently I bought starbound after being interested in, well, the obvious.
I saw a few mods that peaked my interest and downloaded them. I got the ModFattiesRaces neko addon, (both of them, granular and base since without base it wouldn’t load.)
It loaded the intro, laughingfish.mp4, then crashes.
With the protogen mod, the sprites bug out. it shows the thick stage, but random stages go to base weight with the effects.
If anyone has any ideas to how this is happening, drop it down below, if you feel like it.
The mods I have are in the image. If its because of my mods, drop your answer down below, if you feel like it.

Had to make a quick edit, i removed the .pak files of the said races for obvious reasons, vidya gaem crashes.
Edit deux, the neko Worked, it’s just that the immobile stage didn’t have it’s sprite. but the thingabobba with the protogen is true.
But yeah, the neko semi works, no immobile stage, and its certain mods are blunkered. 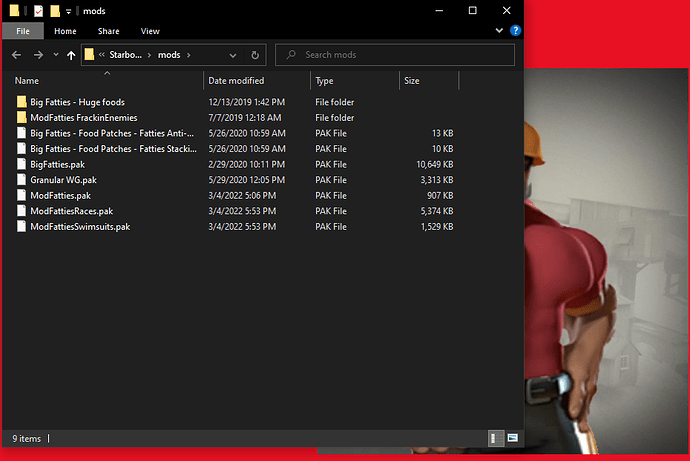 Just a quick note here, if said neko mod is mine, then I unfortunately only added the immobile stage for the WIP version of Big Fatties, meaning that they don’t work in the current release of Big Fatties, but you can as well just rename the item from immobile to blobend and it should work again.

late reply, but thanks.