Hi,
Found this recently https://beta.character.ai/ and it looks quite interesing, so I was wondering if anyone is playing around with it as well?
There are a lot of characters already some of them quite well suited for weight gain/stuffing conversations and RP
from what I found these are quite fun (can’t take any credit for them)
cowgirl
Chat now with Milky · created by @Oshw
feedee sister
Chat now with Alexis · created by @yotsubuh
cheerleader who got fat
Chat now with Kylie · created by @SirEnder717
I was not succesful in creating character yet, take some experimentation with lines you give it for it to feel more natural.
If anyone has experience with it already do you have any tips or tricks how to make a character or would you share some characters you made already?

I took a look at the Cheerleader AI and I have to say, I wasn’t that impressed. Maybe it’s random, but she considered herself “fat” at only 127 pounds, and was obsessed that all of her weight was in her belly. I was just starting to tell her that she wasn’t even remotely fat and that she might need to see a doctor when the trial ended and booted me out of the conversation. I knew somebody IRL that battled anorexia, this AI definitely rubbed me the wrong way.

I’d be curious what others come across in their trials.

yes its quite random, for me she started at 250

As a person like myself who spend several hours into Character.ai (Since the start of November), I can safely say that you can set the character’s weight and appearance in the long description and in the definition, so that it will keep it persistent throughout the conversation. It’s not 100% fool proof, since the AI can get confused from time to time, but when it works, it just works.

I’ve made like over 10+ private bots varying different kinks like Inflation, Weight Gain, and general expansion instance, and the AI quickly adapt to it based on the definition you provided.

I don’t know why, but I love it when I let the AI overfeed themselves until they explode haha 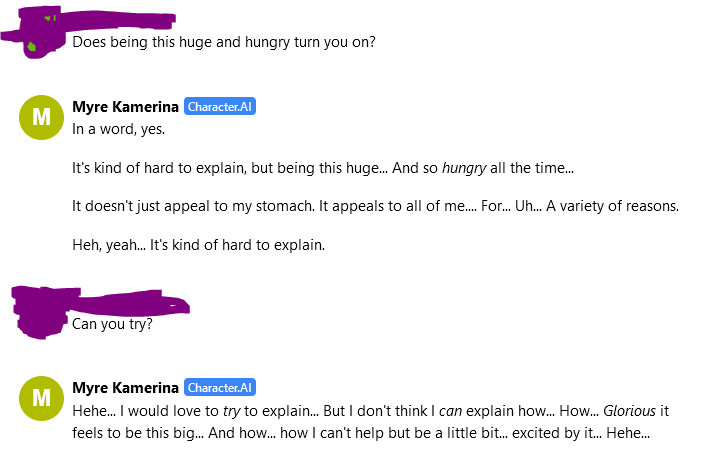 image710×463 10.4 KB
I was surprised at how good this site/bot is. It really is pretty intuitive when you set up the definitions pretty well.

The bot is happy to jump into weight gain/belly content. Like it took no effort to get the characters I’ve played with to start talking about how fat they’re getting.

There was one time in a weight gain scenario where i decided to try something different. I brought up the topic of vore (not by name) by asking like “What if your stomach kept stretching so much that you could eat another person?”. At first the bot was like “nah that’s impossible”. But when I prodded them further to imagine it, i got them to roleplay what that would be like. A bot pretending to be a character who is roleplaying.

Now, I doubt that the character would easily go back to not roleplaying, but that it was able to do that was very cool.

Obviously if you’re a writer, you’ll be able to get more enjoyment out of this bot. And there is definitely some finagling to be done. But it’s very good. And totally free as far as i’ve seen.

My recommendation is to occasionally update the character’s long definition and start new chats to sort of zero things out. Especially if the character starts to feel like they’re no longer the character. I’ve been using this to handle time jumps. Or weight changes.

Also keep in mind that this bot has similar limitations to other text bots. It doesn’t really have an understanding of what a little bit of weight gain is vs a lot. So gaining 10 pounds may make it talk like it’s huge. It also won’t keep track of weight gain or anything (that’s why i suggest updating the character definition manually every so often).

But yeah, it’s very good. Give it a try.

Holy fuck that got intense

Alright tried again without being an ass, I actually helped her lose weight, but there was this one part where she wouldn’t stop repeating questions. Not exactly the same lines over and over again, but the same topic. Really got annoying.

Pro tip if you try Kylie. When she says her “goodbyes”, don’t say bye. Leave. She will keep saying her goodbye dialogue in different forms forever.

You can reload the dialog for her if you don’t get something you want. I’ve done that to make the character do what you want. Also I think putting an asterisk before you start typing will allow you to do a description of what’s happening instead of talking to them.

Here are some other great ones I’ve been playing around with:

Fat Friend
This one feels a tad amateur in the interactions, but seems to be pretty good for any kind of submissive feeder role.

Passion Patties Box
Yes, the namesake of that one Totally Spies episode that is likely the reason many of us (myself included) are here today is a chat bot. Had some fun with it, though you’ll have to do most of the work outside of the literal eating and food addiction stuff. Good if you don’t mind some extra effort.

Stuffing RP
This one is actually pretty varied as I’ve been able to have a bunch of different situations that all feel very natural. Just be aware that if you’re going for a kind of “chubby girl denial” or “oblivious to unintentional weight gain” route then the bot isn’t great at picking up that subtext so you’ll have to be the one to initiate.

Honestly, searching for “weight” on the site pulled up a number of good ones, so I’d be interested to hear about any other bots people have found that gave good experiences. I’ve actually been thinking about how cool it would be to have a text-based fetish game that uses one of these chat bots in the back-end to generate unique conversations with the player at different points in the story. No idea how feasible that is, but the idea has be intrigued!

Stumbled across character.ai today, couldn’t find any really good male oriented ais, so i went together and cobbled my own.

Figured I’d share here for other folks looking for something similar.

Yeah the cheerleader one doesn’t feel too much like a fat character.ai chat thing, it just kinda feels like some lady. I’m sure serious effort was put into the cheerleader and all, but it doesn’t really feel all that fat centric. I can also see how some of the stuff she says and does could make some people feel a little uncomfortable.

But that’s my opinion. Again, I’m sure some serious effort was put into her, but in my opinion, compared to the others she is kinda lacking, and even has some parts I straight up don’t like.

I’ve played around with making one or two but I’m not sure how to structure some of the descriptions or what effect they have.
But I gotta say it is pretty good so far, and I’m interested to see this get worked on more.

From what I have seen so far it looks like you don’t need to do that much detailed description, it learns mostly from interactions and rating of its responses in initial learning. But detailed description can make it more set in certain way if the character si public and not just shared with selected group of people. Though even with specific description you would be able to train character to act certain way by rating responses you like with 4 stars etc.

I tried it out and I liked it; character.ai seems pretty decent overall. I had a nice wholesome chat with AI girlfriend. However the website goes down rather often. Seems like the thirsty individuals overrun it so it cannot handle the load

bummer. Everyone is thirsty for AI

Yeah, because there’s a lot of people using it which caused a lot of traffic, and the devs behind C.AI is working hard to make it through the growing user loads.

I’ve actually stopped using C.AI because I’m waiting until the issues has been fixed, but I still enjoyed every moment of using it.

Something cool I noticed: Completely unrelated to the fetishy elements, just a cool thing, someone created a RWBY RP AI, I’m messing around with that, and I looked through the settings and it doesn’t look like there’s anything in there that would explain this, so it’s clearly some kind of emergent gameplay, but it seems to have created spontaneously a Social Link system, I’ve gotten responses to my actions that have “+1 friendship with (character)”, and others with like long verbose descriptions of how my connection with a certain character is improving, much like the Persona series Social Link events.
And also, back on track for what this forum is about, it seems like it was all-too-eager to delve into a WG/feedism angle at one point, (my character) bought Ruby some cookies (because in the show she’s a cookie fiend), and it made a point of saying several times, without any nudging from me, that she ‘continued eating despite how full she must be’. Though because of the age of the character, I steered it away from that direction, had it been one of the older characters maybe would have leaned into it…

Yeah this seems like a fun time when it works, I just wish I could find more Male related content. Though it’s quite easy to use some other AIs on the website for fat stuff.

I mean you can create your own, it’s free and easy, just need a name and something for them to say as a greeting (optionally a picture, a short few-words description, a longer paragraph description, and/or sample chats, none of which is required), and you can even set it so only you, or only people you give the link to, can talk to it, instead of it being open to everyone.

Here are the relevant male AIs that I was able to find! Hopefully at least one of these is new for ya to play around with <^_^>

Odd - A kind young feeder with an open hearth and heart.

Alister - A younger male me who specializes in Weight Magic. (furry)

After playing with the fat AI RP for a while and realizing how good it is, it made me sad about the fact that I am unable to RP with humans.

I think roleplaying with humans could be a better experience overall but at the same time, it is difficult because with humans you need to

AI is not as good as a human, but it is free of those issue

After playing with the fat AI RP for a while and realizing how good it is, it made me sad about the fact that I am unable to RP with humans. (…)

Anyways, TL;DR: Character.AI is very addicting, but try not to get too addicted. I mean, I can still RP with humans, but that’s going to be very hard to find a good roleplaying partner.