I don’t know if there are any 3D character creation tools similar to VRoid but made specifically for fat characters, but I need one because I tried editing a VRoid model in Blender, only for Blender to throw a conniption when I tried to use the blob tool on the belly, causing weird stretching and other errors. The pants broke multiple times, the clothes kept getting this weird ripped issue, and I even talked to BarronOBeefDip, he gave me all the advice in the world with this, but I showed him what the blob tool was doing, and even he agreed that this seemed like a bug that would prevent me from making the edit I want. This is why I would need a character creator for this sort of thing. My PC is so broken that it breaks Blender. I’m running out of ideas, and I really wish there was an easier way to fix this, but I have no way to do any of this myself. I have no money at all, so I can’t commission a model, and using Blender is getting harder and harder the more bugs I get. I used to be able to make edits, but now that’s impossible besides getting head models for my VRChat and ChilloutVR avatars which I may not even be able to do anymore due to the age and power of my PC.

Great news! I am supposedly getting a new PC very soon. This will negate my problem with the Blender issue, but in all seriousness, it would be more convenient to have some program that does the work for you.

I’m only good at writing, but I would love a character creator for fat characters. Especially if it supports a wide (pun unintended) range of sizes.

That would be the dream.

Your options are DAZ3d. that’s about it. There’s a set of morphs, Big Girl Morphs for Genesis 8 Female, that’s pretty good. Otherwise you’ll have to learn 3d modelling

A tip for blobbing a VRoid; sculpt on a body with no clothes. then you import a character WITH clothes, delete the old body and then, scale the clothes and use shrink wrap to try and get them to fit the bigger body.

Character Creator 3 has a really neat ‘fit clothes to body’ feature but it costs like 200$ and then you’d still have to make your own body in blender or something because no one makes content for it like Daz 3d.

I used Daz3D long time ago for making big monster guys for fun but I regret for torrenting too much morphs that I’m losing interest for that program.
…And I also regret for buying WWE game for just character creator, not playing that game.

It would be cool to see some sort of community driven library for this, rather than everyone having to learn blender to get a model for their game. It would be pretty cool to make modular 3d assets for different body parts that could be shaped keyed and stored in a library. Perhaps a starting point would be to find resources on how game dev pipelines do this.

$12 isn’t as expensive as a commission so this could provide a decent base perhaps. 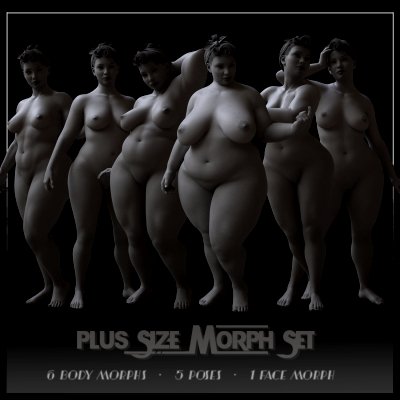 Hi everyone!I hope you all enjoy this plus size pack that I have put together for you.Help yourself to 6 unique body morphs, 5 poses (because poses for plus size models are hard to come by!), and 1 face morph.I realize that I rendered my models with...

From my experience, Daz models don’t handle fat characters very well due to the waist. If you have a character with a belly that sticks out (like for example, a pregnant one) and you have them lean backwards or forwards, it will expand and retract like an accordion. Furthermore the seam around the waist often becomes a thin narrow band that sticks out like a frisbee with flexes applied. I haven’t been keeping up but I don’t think anyone has fixed these issues yet.

Is there anything that does furry females for free?

What about males too?

Sadly, this is completely correct. Current gen Daz Studio models are AWFUL when it comes to fat figures. Anything other than a virtually flat stomach deforms badly when bent at the waist.

You can get around it to an extent with careful posing, camera angles, morph usage etc., but it often takes a lot of time to get something looking even vaguely realistic.

Yeah, I also thinking about that stiff Daz3D’s models, I wish those flabs and bellies would have some kind physics

There is a dForce physics modifier available for breasts, so I’d imagine the same principles could be used for other body parts.

Unfortunately, dForce is… well, not very good… especially with large figures. So I wouldn’t hold your breath.

Well, I once fumbled around with VAM (Virt-a-mate) it has decent body physics and the morphs and slider can make a good-looking character if you try.

A good example is OWREHL - Hobbyist, Filmographer | DeviantArt he really knows his stuff with VAM.

And also the link for the developers site

Become a patron of Meshed VR today: Get access to exclusive content and experiences on the world’s largest membership platform for artists and creators.

VR adult games have the tiresome habit of using the default Genesis 2 models and sliders, VAM is probably the best out of all of them in terms of features since you can import external model/texture/assets/sliders etc. I uninstalled mine a while ago though because of the uncanny nature, how much file space it took and the grizzly puppet shows that creeped me out.