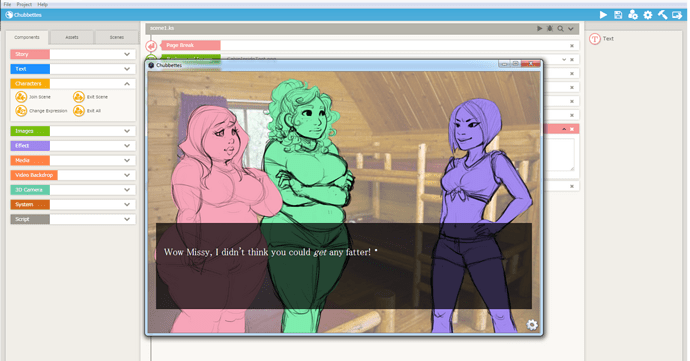 1024×536 395 KB
Jelliroll and I have been talking about making a visual novel for a while, so we decided to finally do it! Chubbettes is our proof of concept, you might say, just a short little thing we?re making to teach ourselves how to use Tyrannomaker software. But if people like it, we have plans for more!

You play as an inmate at a fat camp. Your fellow campers include bitchy thin girl Jackie and shy plumper Missy. Of course, SOMEONE?s going to gain weight, but your choices will determine who?

Chubbettes is a short visual novel, it?ll probably only take 10-15 minutes to play through the whole thing, but it does have 4 different endings.

Most of the writing is done and Jelliroll is working on the art, so I’ll be posting more when we have more!

Awesome! I look forward to seeing it!

This looks so cool!!

So is this based on Fat Camp Escape, but no puzzle elements and a different set of events?

So is this based on Fat Camp Escape, but no puzzle elements and a different set of events?

It’s inspired by Fat Camp Escape. There aren’t any puzzles but you can make choices that lead to different endings.

This is going to be amaaaaazing!