*The creator has recently confirmed they would like to continue work on this project.

Anyway, the game’s meant to be like a muscle fetish game but you can make your character pretty fat and then work her out at the gym and see her get out of breath real easy. There’s a tiny bit of customisation and the last thing the creator was working on was body physics (they’re partially implemented rn and not too bad)

It’s got some sex scenes as well as some physics based solo positions so you can stretch her across a bed etc.

It might be worth backing the project once some more content rolls out if you really like it as the top tier donation is a “I’ll highly implement your ideas” one which could be interesting but I honestly wouldn’t recommend doing so since it’s not actually a weight gain game.

**if you wanna make her fat and as quick as possible, spend 2 weeks making a load of money conserving as much high calorie meals as possible and then just eat it all at once, it’s sort of exponential how much weight you put on so doing at once is the fastest. 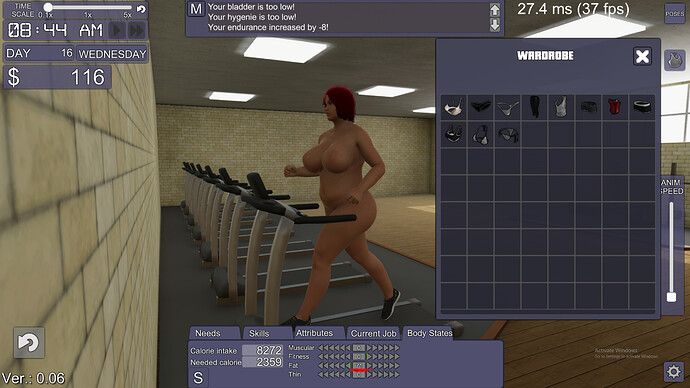 Aw, it’s always sad to see a cool project drop dead. What’s the reason, if I may know?

I know, constantly refreshing the page - there’s gotta be something there! lol
No idea, on their last post they said something about being busy with work, I know how they feel but that was months ago now. If it’s any comfort I don’t think the guy had weight gain in mind for the game but some of the stuff like physics that they were working on complimented it.

I’ll try this game out soon, but the premises seems rather promising, a shame it’s dead, but thanks for sharing the link dude!

I’ve got an older computer so might just be encountering a bug, but in the Free version 0.07 I cannot click the Go to Work icon when trying to leave the apartment. Is there some control or thing I need to do in order to exit the apartment and go to work??

Thanks for sharing the link, the game seems interesting!!

After you’ve gone on the laptop and got a job, same as above but I’ve also remembered they added a live stream thing in which just idly earns you money so you can just put that on, turn the game speed up and go afk for half an hour and then mukbang!

No worries, I held off sharing for a bit because I was waiting for some more content at first and didn’t want to creep out the creator with a load of “gonna add belly play to the game?” dms lol

NEW POST!
After 2 months of nothing after ~weekly updates, the guy’s finally back although it’s an apology post… This was some coincidence but I’ve changed this post a bit because they have confirmed they want to continue (their Patreon’s gone back up a bit too so looking good).

The top tier Patreon package is a “I’ll highly consider implementing your ideas” so if you’re really into it, that’s something you might want to get in touch with them about.

Anyone else getting graphical glitches? The hair and the skin don’t load correctly for me.

No wonder they stopped. This game is too glitchy and I can’t even leave the bathroom. What the hell?!

How bad? For me the hair is a bit weird in certain lights but skin is never a problem.

It’s not that bad, it beats another 2D, HTML, or RPG maker game

You’re right. Sorry bout the hate, just was annoyed with the constant camera glitch. Couldn’t even get to the toothbrush.

No worries, I think you just have to swivel the camera a bit after you do an interaction, after toothbrush you have to move the camera to get out for example. You get used to it, is a bit finicky though I’ll admit.