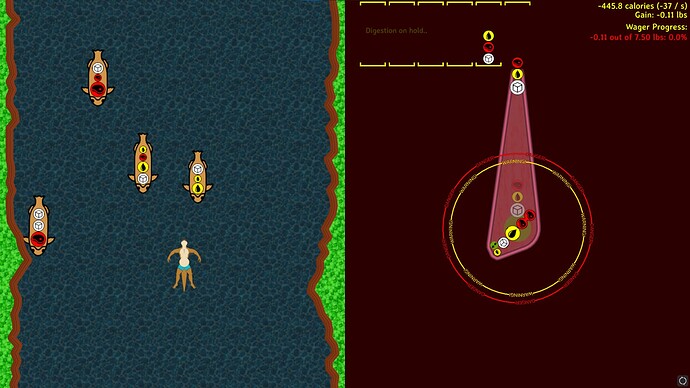 I’m working on a gain-themed arcade-y type game in unity. I’ve drawn inspiration from vertical scrollers, puyo puyo, and katamari damacy. It’s still in a very early state, but I figured I’d share it here, and see if anyone has any feedback.

Controls: WASD to move, SPACE to drop pieces faster, QE to rotate your “katamari” of attached pieces, ESC to pause. You can also use a game pad (Left stick to move, any face button to drop, triggers to rotate, start to pause), but you’ll probably still need to use the mouse to navigate the menus.

Objective: Get as fat as you can. Eat fish to get puyo pieces, match puyo pieces to get calories. Try to set up combos and chain reactions, as they’re worth a lot more (and are basically required to do well). When the stomach is filling up with stomach juices, try to stuff as many extra puyos as you can without matching (so as not to overfill with stomach juice). When you’re completely full, avoid hitting any fish for some amount of time (I think it’s 15 seconds) to trigger digestion and end the round.

Here’s the link to my current build, at this time:
https://drive.google.com/file/d/1bPqmGOCdE9VTOPqY94YjqcSfZSk7BudF/view?usp=sharing

Here’s a Quick Start guide video, to well, get you started: 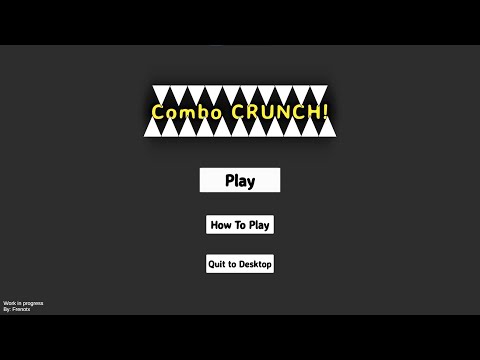 Edit Sept. 21 2021:
Uploaded some gameplay footage of a successful first round, to give you an idea of what to expect, and some strategies that may be helpful: 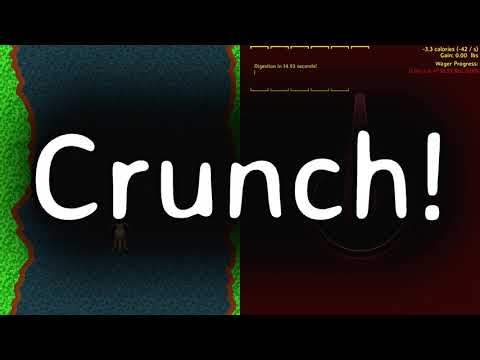 The visuals are mostly all place-holders (thank you Kilif for providing me with a temporary character sprite), and the feature set is limited. I put my focus on getting the core gameplay loop working first, with the plan to just build out from there.

I’m not sure whether it’s my personal bad skill or if the easiest difficulty is still too difficult to reach. It’s difficult to focus on two screens at the same time (avoiding/eating puyos while also rotating stomach contents to get a good combo set), though that also may just be me.

The highest I’ve gotten was just under 6lbs, and got several combo chains. I was trying to focus on nearly just fat, but I might try again at a later build to focus on two different types of calories.

super fun game you’ve got so far, though i’d love a sandbox mode with no bets. it’s basically impossible to progress without making constant combos, though I did start to get the hang of it a few runs in.

Thanks for the feedback. It’s definitely a lot to keep up with. Not a lot of games have that sort of split, so it can take some getting used to.

Strategy-wise, I find it’s best to focus on two types. With one type, it’s hard to build up very many near-complete groups without, well, completing them. With three, chain reactions tend to happen less due to types getting in the way of each other. Trying focusing on getting a good mix of fat and protein, while avoiding sugar as much as is practical. Stack up as many groups of four as you can manage before “setting it off”, to maximize the number of chain reactions (and thus get those mega-juicy multipliers). It’s really more of a “combo / chain reaction game”, than a “matching game”.

It can also be helpful to rotate the katamari into position, but then intentionally refrain from speed-dropping the piece. While it’s slowly falling into place, you’re free to focus on the river side. Getting into a rhythm of that, switch your focus back and forth instead of trying to watch both at the same time, helps keep things a little less overwhelming.

A sandbox mode could be interesting. How would that work with the stomach juice, in your mind? Just not have that mechanic? Or were you thinking more of the game operating just as it normally does, but without wagers?

what I was thinking was not having a bet system, or the option to not bet. I’d love to really get somewhere but I haven’t made it past the second bet XD

Yeah, a mode like that could be nice. A practice mode could be handy, too. No stomach juice, but also no gain. Just something to try out different strategies, and practice getting those monster combos.

I definitely think it’s just too hard in its current state. There are a lot of ways to remedy this, but the best one in my mind is to make gain happen faster than it does. In conjunction though, less stringent punishments for not completing a goal seem like a missing piece of this game. Something like losing 5 lbs if you don’t make the wager instead of just an instant game over. this combined with a minimum weight system, where if you drop below it you then game over would make the game much more satisfying to play. Also being overfull of stomach juice shouldn’t result in a game over either imo. Maybe it will trigger a countdown, that if you don’t get a certain kind of puyo clear, will eject most of your stomach juice and all of your puyos, but if you do clear the condition, your stomach juice goes down some and you get a nice calorie bonus. makes it a risk reward system instead of another (of way too many) lose conditions.

you may also consider making different environments, like a polluted river. Where the fish are mutated, and if you make the wager for that level you gain much more, at the cost of losing a TON of weight if you fail, because of the pollution. or maybe losing there gets you a game over? Also, something to dodge (or use strategically,) like a rotten fish would be an interesting twist, though you’d need to give the player ample warning before it’s on screen, ideally via an audio cue.

Speaking of audio, I can’t wait for this game to be full of gulps and gurgle sounds. its gonna be awesome when it has audio

I like how the game is going so far; it’s easy to understand and play, but I’m not good at puzzle games, so if possible, I think an easy difficulty option where you burn weight and calories slower would be nice. Sounds and music would be nice, but I understand that those would take a while. The only thing that I would want in an update would be the ability to play the game in windowed mode.

The game looks great so far, though, so I hope you keep at it; this looks like it could be a great game to relax or kill time with, and I would love to see this get updated in the future.

I like the idea quite a lot. Although, for rotation, I would greatly appreciate changing it from Q and E to the left and right arrows. So both hands can be used for max efficiency.

Custom keybinds is high on my list. That might actually be the next main thing I focus on, since that has a pretty major impact on how someone can play.

Kilif also suggested I make a short how-to video to better explain the objectives / strategy, since the game is unusual and not terribly intuitive. I agree that it’s probably a good idea, so that should be coming soon too.

I’m in agreement that getting a game over for not meeting the goal is too harsh, but also i think the controls and overall difficulty could stand to be improved. not being able to change the order of the nutrients as they fall gives strategy, but not being able to rotate their position as they fall hampers effective placement for larger pieces. the rate you lose what you gain is also a contributing cause for the difficulty of this. not to mention being able to go into the negatives at the start seems like a bit much. overall i think the concept is good. and this has potential. with it still being early in development there is a lot of room for improvement.

I managed to make it through 4-5 wagers before I accidentally made too big of a combo.

very fun to get there, though combos are ESSENTIAL to progression.
also, the belly starts to cover the whole body XD 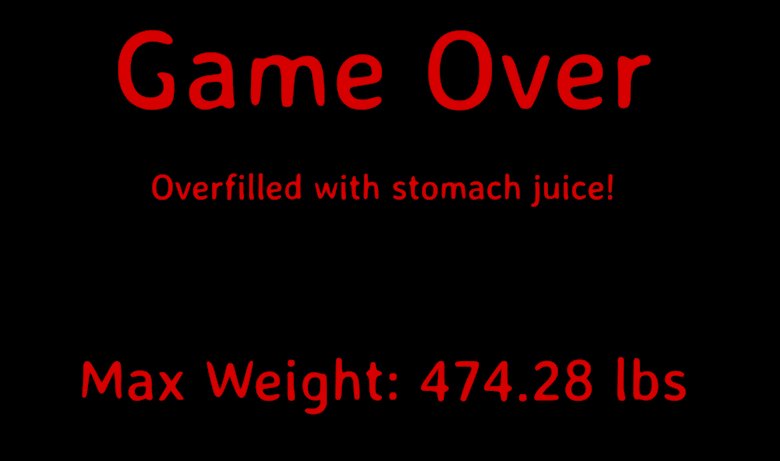 Very nice! That’s a good score. Looks like you’re getting the hang of it. Yeah, combos are definitely the name of the game (in fact, I might actually include the word combo IN the name). Combos, and really pushing the limits of what you can get away with! I want the player to frequently look at the situation and think, “Oof, it’s close, but I can proooobably get away with fitting ONE more in…”

Since your stomach size is a big factor in how much of a chain reaction you have room to set up, it’s important to always be stretching it as much as you can. The fatter you get, the harder those wagers get, the faster your metabolism gets, and the bigger the combos you NEED to get to keep up! As such, you always want to be filling the juice right up to the redline, and then cramming as many non-matching puyos in on top of that as you can before the round ends. Those non-matching puyos get digested in the round end screen, push the stomach PAST the redline, and stretch it bigger for the next round!

I’m a big fan of “push your luck as far as you can get away with” blackjack-ish vibes in games, so this game is full of stuff like that!

As for the stomach covering the character, yes that quickly becomes a problem at larger sizes. The character is currently a placeholder, so it’s literally a static sprite with a circle (the creamy colored belly) and an ellipse (the darker “parenthesis” on either side) drawn on top. For the more final design, the character will most likely be face DOWN instead of face up, leaving plenty of space for the belly to spread underneath them. I’m 100% not an artist, though, so things like visual assets will need to be at least partially outsourced.

Confused: the menus are not working for me

Try re-downloading. It looks like I messed up the layer order on something in that build, but I just uploaded a fixed version.

I think adding something like a belch ability that clears the screen so you don’t accidentally eat too much that has very few uses or incurs a cost.

Also, will there be a female version of the character?