A note before I get into this, even though the brief isn’t going to be long as is. This game is planning on utilizing themes that might make it unsuitable for several people. These themes include but are not limited to dubious consent, mind control/breaking, body horror (related to fat, limited), and likely more to come. Bad ends are the goal here, as is to be explained.

Playing through the game jam games that popped out at me, I was actually inspired by Teaching At a Magic School - it’s final bad end in particular. I won’t spoil it explicitly here, but let’s get into things.

The basic concept is as follows:

The player takes on the role of a low ranking cultist to the Goddess of Sin. After a brief tutorial period, the player’s cult is viciously culled by the great Knight of the land and her entourage. Facing death, the young man is gifted with a vision by his goddess - offering her last follower vast power in return for spreading her faith once again.

While she cannot bestow great physical or magical might on her own, she can offer the ability to obtain his own - by stealing others’. The primary method that the player gains new abilities is through subduing major women throughout the kingdoms and bringing them back to their cult stronghold where rituals can take place.

These rituals involve chaining down the woman in question and subjecting her to a barrage of stimuli - food, sexual pleasure, and so on - while the player casts the spell. In order to steal the power from his their victim, the player must enter her mind and subdue her at a point in her life when she would have the power in question.

So, as an example, with the master knight the player has to contend with at the beginning of the game, the player would enter her mind and defeat her as a promising squire one on one. She would find her abilities dulled slightly and waistline pudging outward while the player would gain access to “F” rank sword abilities.

Further scenes would slowly break the knight’s will, eventually corrupting her soul and mind as she loses memories of her past life and becomes a different person (or less of one, anyway) as the fun really begins.

These abilities (or “Arts” as the working name is) will be ranked from F → S on a pretty standard ranking scale.

As for implementation. This game is being developed in Game Maker Studio 2, with basic assets being made in Hexels 3 and hoo boy am I bad at making art and especially animations. Currently all that is implemented is a functional main menu that leads into a slightly animated combat scene with no back end as of yet. Just wanted my ideas out here since I’m surprisingly inspired at the moment for this overly ambitious idea.

Thanks for reading, and I’ll update here if and when things get further off the ground.

A dark concept, to be sure, but a welcome one. I’ll be very curious to see your progress. I’ve always had a love for asset/experience theft, and this seems like it would be right up my alley!

I love this and hope this does get fully developed. I really like the concept and hope you go full harem with the prominent women you capture and mentally conquer. Using them to exact yours and the goddesses will upon the land.

I like the concept too. I hope the main character and the cult will be fleshed out enough to make us more sympathetic to their cause.

Love the concept, though do hope there’s a small level of character customization such as gender.

The biggest obstacle is my lack of artistic ability, really. Sympathy is probably going to be optional, though there is some level there because of the slaughter described above.

But I my strength here is probably my writing capacity, which is something that comes in after the mechanics and systems are laid out.

And on character customization, assuming I code it correctly model swapping is something that isn’t difficult. It’s certainly something to be built on later in development, as I want things to be inclusive.

But I would probably want unique scenes for each possible gender, which would make more work for myself.

To be clear for any wondering, I don’t plan on any male weight gain to occur as it’s not something I’m personally interested in.

Actually I was thinking more along the lines of picking your character’s gender being the only switch which would simply be copy and paste all encounters but change the “he” to “she” unless it’s in first person then would change any indications of “you” in a male context to “you” in a female context.

Honestly wasn’t thinking of picking your character’s gender and changing every gender in the world to match, though would be more open if you did make it so people could pick their preference, but I agree, you’d need a 2nd writer for that who is interested in male weight gain. 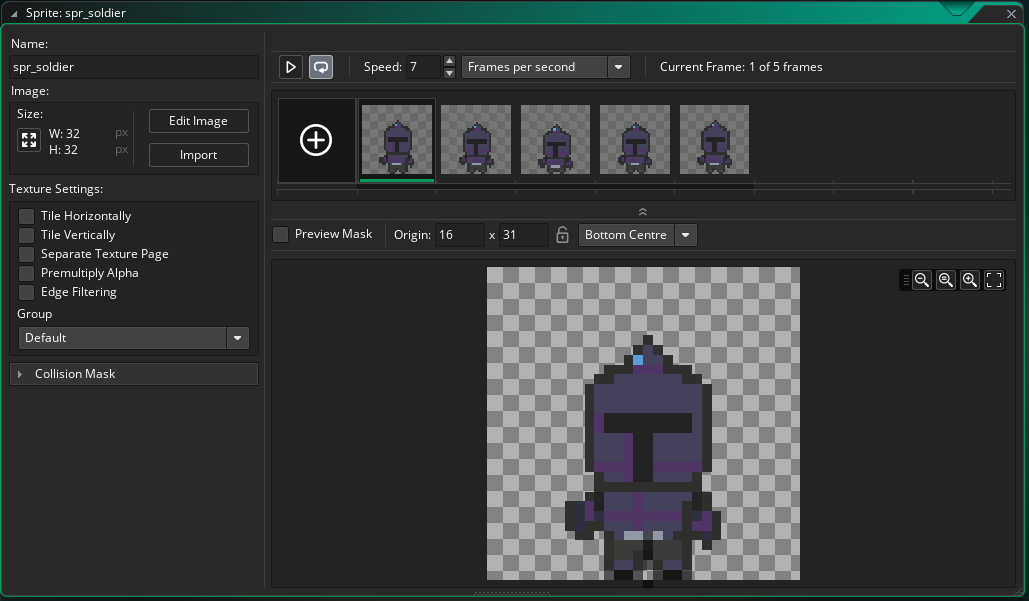 That’s probably how I’d do it, but the sprites are planned to be detailed enough that there would have to be a separate sprite for a female MC.

Thanks though, because I didn’t remember to note how I’d be handling a few things. Currently combat sprites are planned to be 32x32 pixel animations using sprites similar to the one above. Ideally the end project will be something 64x64ish instead, as the current format isn’t ideal for stretching to the size I’m using and lacks definition.

Character portraits (which the MC and major NPCs will have) should be in 128x128 and will have several stages for the growing girls as well as the phantom counterparts you fight in their minds.

Update: Visual indicators for the player’s health and mana have been implemented, along with proper damage calculation to affect health. The big system I want to figure out is inventory and how to handle items, before moving onto Arts.

Currently planning on having the player begin with a weak Heal spell and nonelemental Damage spell for combat flexibility.

This sounds great as long as the art is good (and there’s plenty of redheads) I’m going to play a lot of this. Out of curiosity what’s the planned control scheme?