Update (8/2/19):
small update because I’ve been dead the past couple of weeks: been super busy with work and other projects. I’ll check back in in a week but haven’t had much time to work on this.

Update (7/17/19):
I recently finally played corruption of champions. Pretty neat.
It made me realize I do not have robust functionality for genitalia.
Should I expand on this?:

I’m getting close to a prealpha release so I decided to make a roadmap. (note to past me: haha what were you thinking idiot) This isn’t finalized, but here’s a rough list of stuff that I haven’t done yet that I’m going to have in each version

ETA on a prerelease: when it’s ready 2 Weeks if nothing else comes up. That was optimistic. It might still happen but I want a bit more to be in a basic prerelease.
never lol ehhh I don’t really know.

Since a list of features is a bit stupid now since I’ve got a good amount implemented, here’s some idea of stuff I want to focus on:

If I get more good ideas I’ll jot them down here, but that’s about it for now.

I am still looking for more writers, drop me a PM if you’re interested. 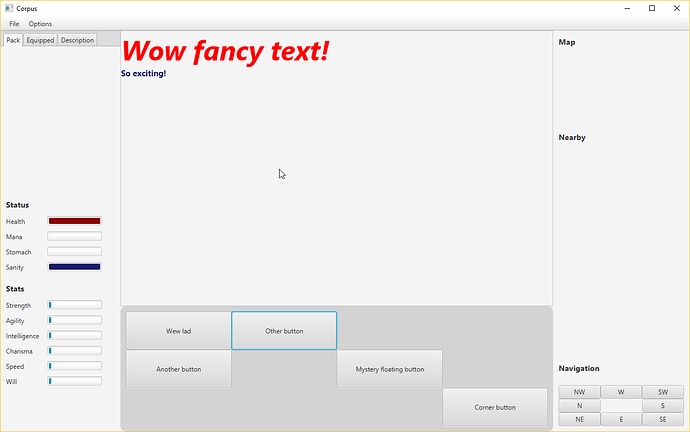 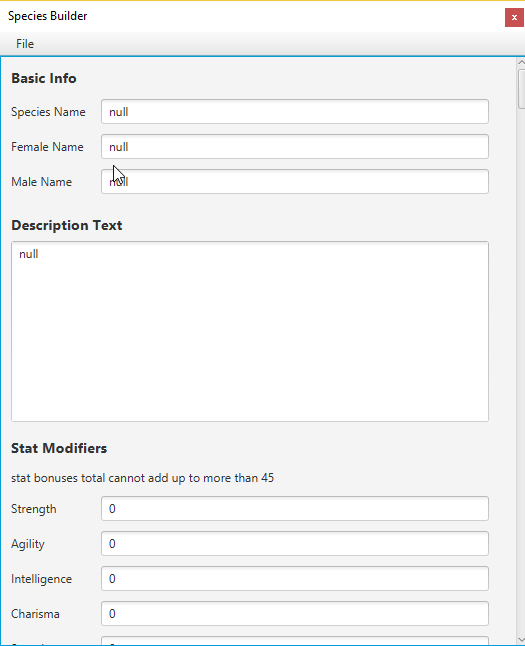 I’m kinda interested. Granted, I’m stuck on a tablet for the foreseeable future and can’t play anything, but still. Nothing wrong with more creation suites.

nice! UI looks nice so far, looking forward to what else you make out of this.

Looking forward to it!

Can’t weight to see what this becomes!

Hey @A_Plebian how come whenever I try to run the .jar file it always says there is some type of error? Help me please.

I’m not sure exactly what you’re running or how you’re building it. It would help a lot if you posted the error you’re getting. 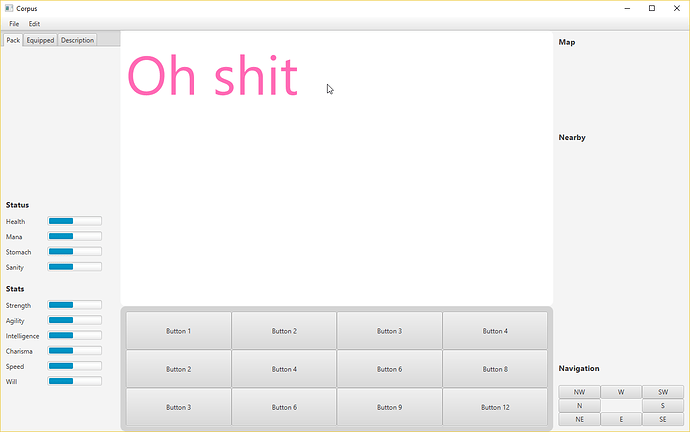 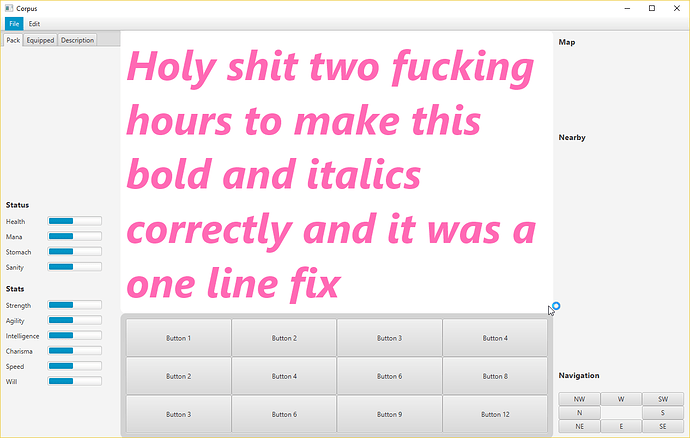 I have commit sins of the like only spoken about in legends.

I swear that the much more logical way of doing this wasn’t working for no discernible reason. But this works fine.
Still not as bad as my map submap function.

Using a POJO wrapped in a SimpleObjectProperty tends to involve a lot less typing (or at least cut n paste) with JavaFX, and a generic event handler can decide what needs changing based on which UI object triggered the event. I’m not sure how that would work with the framework you are using though.

The framework I’m using uses functional ui builders, and you can just stick the builders in a loop and it will add it multiple times. It is how I am adding all the buttons to the main screen for example. ListViews are really fiddly though and gave me a lot of trouble in the past as well, and for some reason here they just weren’t even binding to a backing list when the list was in another list. I fought with it for about 4 hours before finally giving up and going with the nuclear solution.

After a lot of blood, sweat, tears, mental anguish, and more tears, the character creator works. 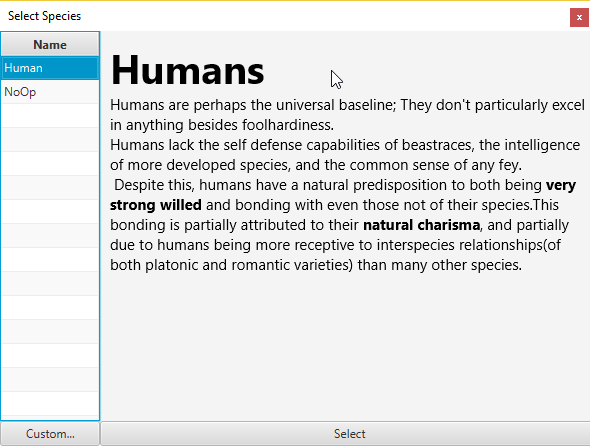 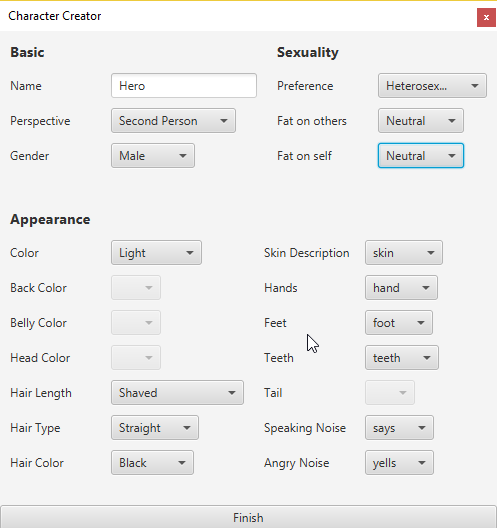 What kinds of beast races are you planning to add to the game in the future? I saw the description of the human race and it mentioned “beastraces” so I was curious.

I plan to mostly be adding by request. Pretty much anything is fair game (with some exceptions, like stupid meme shit or “they only look 11 they’re actually 1000 years old” garbage), and even if I outright reject something you can still add it yourself if you want to. That’s why the editor is there.

I just added a shitload of new info to the main post so I’m self bumping.

Really looking forward to seeing this engine develop. I really would love to make games like Boundless, Corruption of Champions, and Trials in Tainted Space but I never understood how to properly get into making this sort of game, so this looks like a good step forward.

If you’re interested in developing on the engine, I could get you set up with a prerelease version. I’m trying to think ahead as much as possible to preserve backwards compatibility going forward, so hopefully you could write something now and it would still be good for a ways into development. I’ve written a good amount of documentation, and it would be useful to know weakpoints in it. I obviously am not going to have an easy time doing that considering I’m the one making it so things are inherently going to make sense to me.

I honestly can’t wait to see how everything ends up. I would offer to try and help with writing, but I’m always inconsintant when it comes to being active on these sites, but I’m hoping this is good