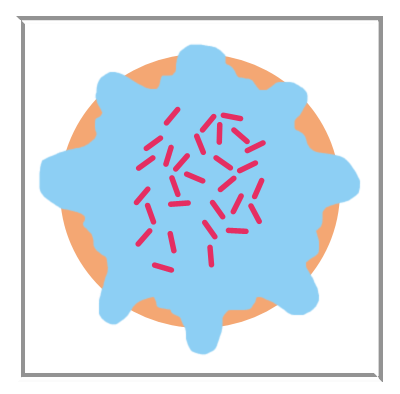 Like any Public Safety Officer should know, cupcakes, muffins, regular cakes and such sources of decadence and hedonism are banned by the Office of Public Moderation. However, you, and every other Public Safety Officer, know that the kind of degenerate that would break the law is the kind of rat that would hide their goods.
It is, therefore, your duty to deliver righteous punishment upon these criminals by finding their stashes and eating them yourself*.

Of course, to be able to impart retribution, you must locate the fatty refuse they call “food” and for that, we have just the tool. A nifty gadget the Development Team refers to as the “Sniffer”. It works by being laid on the floor, point at which it will emit a ping of righteous moderation in the surrounding area, providing a moderately correct prediction of where sources of decadence may be found. Can you believe that the Development Team wanted to make it an absolutely correct prediction? Psh, the heathens…
Once you have located their sugary waste, mark it, so a team highly specialized on handling hedonism and it’s produce may be able to safely extract it. Do take into account, often times we’ve seen the criminal in question downright devour the evidence in order to prevent it from being found, so make sure you don’t place the sniffer over any sources of decadence. Mind that your task is to extract as many of these as possible. The less you’re able to take, the less the reward you’ll recieve.

*The Revulsion would be plenty happy if you were to accidentally, yet forcibly, feed the offenders their cupcakes. However, you better make sure all cupcakes are fed before the extraction team arrives, or else.

TL;DR
It’s minesweeper but you make either your character or a second character fat.
If you hit a mine, by accident or intentionally, you have a total of 10 seconds to hit the remaining mines.
The mines are cupcakes.
If you’re planning on doing this, don’t use my art for a cupcake. Not because I care, but because it’s trash and you’ll probably be able to make something better yourself.
If you decide to take this idea for anything, do me a courtesy and throw me a link to what you made.
Not a revolutionary idea, sure, but one that I’m surprised hasn’t been adapted to this fetish yet. Should be far easier to make than Mallsoft overall, but there’ll be far less game to play. Or not, depending on what is developed.

Well, now look what you’ve done! You’ve made me want this!