For those of you who haven’t seen my content before, I’m CoastalBunny from DeviantArt.

I’m a 3D content creator who utilizes a system called VAM for my projects.


About a month ago, I got interested in expanding my content into a visual novel. I have started my project utilizing TyranoBuilder (since I’m not much of a game developer by trade and my gameplay won’t require many back-end calculations).


The premise of the gameplay is this:

The way in which this game is built, the possibilities really are endless. The player’s condo will basically act as a HUB where they can choose to go out and do different things. But once they make that decision of where to go from the condo, that storyline is set in stone until they complete that storyline - Sorry, no dating multiple girls! Unless of course that specific storyline has you doing so


Please keep in mind, I am not a game developer by trade. Heck I wouldn’t even consider myself a content creator by trade, yet here I am diving into new projects. 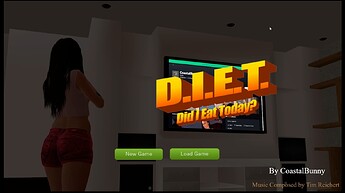 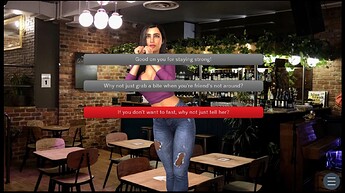 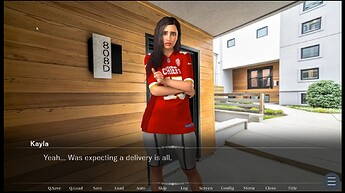 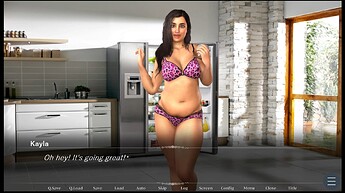 Looking forward to any feedback as things get kicked off!

This seems interesting. Is the intention to have a more linear storyline that is fully complete and then moving on to adding others? Or will the storylines have more branching paths that might lead to multiple paths within a storyline?

Also is there any particular tier you’re planning to release the game to on your patreon?

Definitely going to follow this I’m looking forward to seeing what you do with this in the future, good luck!

Nice, certainly curious to see how this goes.

I’ve seen your work on DA and it’s certainly on the higher quality end of the spectrum.
Would love to contribute to the story, but I mostly do fantasy\magical WG stuff and tend to go to the bigger sizes, so I doubt I could be of any use to you and your project.

Best of luck on this one

The stories will be a bit linear, but my intention is to allow the player to feel as though they are taking a more active roll, a passive roll, or discouraging roll to the characters’ developments.

I intend to have it released to 2 different tiers:

Best bang for the buck certainly is CB Connoisseur, but if the other content isnt interesting enough then the CB Gamer certainly is an option.

Nothing wrong with a more linear story in my opinion, especially if they are meant to be a more contained event within a storyline.

Anyone know more about TyranoBuilder ? why is ren’py so dominant? every single game out there in the fetish community made by artists and writers with little gamedev experience all use ren’py not tyranobuilder?

Tyranobuilder looks legit though from a quick google?

edit: sidenote, uh, specifically asking about the image of being in the car? that’s not a 3d image is it? is that a stock photo background? or just a render that doesn’t look like a render because of the weird car driving blur effect?

All backgrounds in the game are simply photos (except for the title screen and some end scenes).

And I personally love TyranoBuilder. The UI is simple to use and learn from. Ren’Py looked to have an unnecessary coding learning curve for the story I’m doing, but i will say Ren’Py certainly allows for more interesting features (such as behind the scenes calculations based on selections that will yield various outcomes). The outcomes in TyranoBuilder are, generally speaking, more linear in what is specifically selected from the choices made at that specific moment.

TyranoBuilder is neither free and not really that great a software.
It’s very difficult to work with, prone to crashing, and not really that well supported. Ren’py has its own issues, but it is stable and have a large, pre-existing community that is open to help.

That’s interesting that you day is difficult to work with. It’s practically is own video game in terms of its UI. Very straight forward and the tutorial provides probably 80-90% of everything you’ll need to know about using the software.

It does cost a few bucks, but so does everything else I use so rather than waste hours trying to learn basically to code, I can simplify the learning curve and bang out things pretty quickly.

As for crashing, I’ve had one experience with the game crashing since testing it. That’s vastly better than the numerous error screens that seem to pop up with most Ren’Py games.

But TyranoBuilder definitely still has its issues. Because of the simplicity it can’t do or calculate as drastic of backend items (if this then that’s are only so complex before bringing it to a crawl). And the support is nonexistent, but I’ve never been one to really ask companies for help on using their products anyways.

For the simplicity that my visual novel is, TyranoBuilder is more than adequate.

Ah yes, I know all the backgrounds are simply images, that’s how visual novel game engines work, I guess I meant, most of the backgrounds looked like images you created, except that one in the car, which I have no idea how it was made, what with the interesting streaking lights. So I wondered if it was a stock photo that someone else made available, or if you wanted to comment specifically on how the streaking lights effect was made.

Also good to hear some various opinions about tyranobuilder, thanks all.

Ultimately use what you are comfortable with. Given this is meant to be a linear CYOA deal, you are right that its better to use something simple over learning an entire programming language.

And true, have stability issues with more complex Ren’py games. You can look at Forks’ devs’ demo of Aria to see it CHUG like a fat girl and a soda bottle! But I also had similar issues with TyranoBuilder games that are far less complex, and I’ve seen many devs end up just swapping to it, especially if they want more complexity to their game later down the line.

Ah gotcha. I just meant they were all stock photos except for my title screen and a few special images later on that haven’t been shown yet.

How much content will there be in version 1.0? Like how much gameplay can we expect? 10 to perhaps 20 minutes? Maybe more, I’m just because of my excitement

It’s hard to tell because people read at all sorts of speeds.

Decided not to wait up until midnight to release. So version 0.1.0 is available now on my Patreon!

Become a patron of CoastalBunny today: Get access to exclusive content and experiences on the world’s largest membership platform for artists and creators.

It was nice to play. I hope, that you will continue to expand this nice novel. Both story paths are interesting.

If this was a mistake, I’m glad I warned you, and if not, nevermind disregard.