Hello! I just released a small open source game about two catgirl friends Horie and Leaf doing competitive eating! It is inspired by Debu Debu Literature Club but I changed the mechanics so that you can choose your favorite character and and get her extra points based on your reaction time. 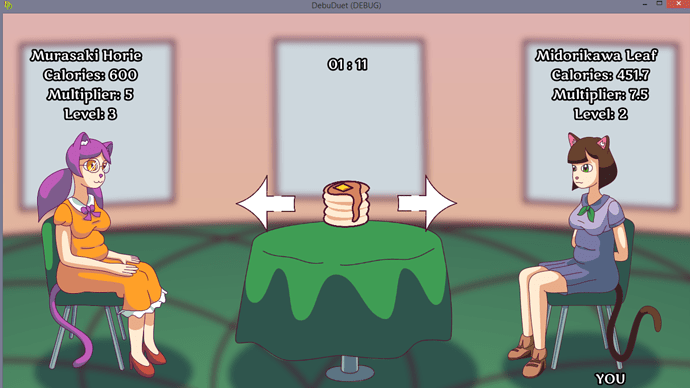 SOURCE + EXE: GitHub - Ainlid/DebuDuet_Source: source files of the Godot 3.2.2 project
To download the executable, go to Releases and pick DebuDuetWIN.zip

Don’t expect much from it, it’s not explicit and the characters don’t get all that fat (5 stages each), but this is why I did my best to design the game with modifications in mind. If you have Godot, you can drag and drop any sprites in any amount into arrays and it will work fine. You are free to do anything with the source files. Just consider giving me a credit if you’re gonna post your own version.
I learned a lot while making it, hope you will enjoy my game too!
P.S.: I hope I’m doing this right. I’m totally new to both Weight Gaming and GitHub Desktop.

Alright, technical things. The music seems to play itself twice, and Muting the music only puts it at like 15% or so, not a total mute. Whilst playing, even trying both characters, not once did I see marshmallows appear. Lastly, escape button did not actually close the game. But for a simple little project, this is good work. Just wish the food came out a bit faster, but I can see other folks tinkering with this. I may even have to try so myself.

Oh yeah I decided to change volume with the button but my quiet speakers led me to believe -50.0 dB is enough to silence the audio. I will try maximum -80.0 or just go back to stopping the playback entirely, music timing isn’t really important to the game.
Now that you mention it I too never saw the marshmallows. Probably an oversight.
I will fix these things now but I’m not sure I have the energy left for minor problems. Thank you very much for the feedback!

I downlode it, but i have no ider how to get it to work.
Can some please tell me how.

Have you unzipped the archive? It contains a Windows executable. Which Windows do you use?

I can’t find an executable in the archive, myself. Unless I really don’t know how to use github. Which wouldn’t surprise me.

I released an update with bug fixes and archive added differently. I just downloaded it back and it contains the .exe. Maybe your antivirus thinks it’s malware?

I didn’t know first but you have to go to the releases tab (on the right) to find the version with the .exe (and not use the code button)

Playing without sound was a little weird on account of the double music but I like what’s here.
I got up to stage 4 on each character and I feel like I reacted pretty quickly. Maybe I’m just getting bad luck with what items spawn or a maybe a bit more time would be beneficial?

Does picking a character over another impact anything? I didn’t seem to notice a difference.

Character selection is purely cosmetical. The idea is that ‘player’ character gets points based on your timing, while the NPC gets the same amount every time. So if you play quick enough and don’t make too many mistakes, it is possible to reach level 5 with about 20 seconds left until timeout.

You gave me an idea though. I can make spawn rate into a ‘difficulty’ variable or make it increase over time so it gets progressively harder like many arcades.

It is a Cute game but it needs some work like if you feed them the wrong food your time goes down or sometime to add some spice to it.

Thank you! I will try to make gameplay more interesting.
I do plan to port the game to phones eventually but right now I have zero experience with mobile gamedev, so it will take some time to learn this stuff, sorry.

pancakes and milkshake in anime style, that’s so very fresh

Ok, I feel like a total idiot- but… how do you even play this? The opponent gets so many points for nothing, but you don’t gain next to anything- if the wrong food spawns you have to feed it to them and give them points? I’m lost.

Edit. I guess Leaf just wins no matter what happens, then. Ok.

The player feeds both, but has to react quickly whenever selected character’s food appears. When I was testing the game, I won 80% of the time. Sorry if it’s poor game design, I just didn’t want to copy DDLC entirely and competition was already a core idea. As for originality… yeah it’s basically ‘pancakes and milkshakes’ with a bit of math. Initially I had less static concepts like pong variation or bullet hell kinda thing, but it didn’t feel right. That and I can’t prototype quickly yet, so I stick to ideas that would kinda work in the worst case scenario, ideas simple enough that I can ‘test’ those in my head. I aim to learn prototyping and raise the bar next time.

Game is interesting and is entertaining for a bit. Art is very nice, and I do quite enjoy the progression of the characters. The idea is simple and easy to understand, at least if you read through this post and figure out the base mechanics of the game (The whole concept of feeding the player character faster giving more points, which I did read about before playing). If you plan to continue working on this game, it might be good to add a little note somewhere in the main screen or as a side screen, as most just eager to see some games with tubby people might not recognize your intention and become a little confused. Maybe something simple like “The faster you feed your character, the more points you get!” placed at the top of the menu could help send people in the right direction.

I will say I was a little surprised when I realized the size difference between each weight level wasn’t that drastic. It was nice seeing the progression when looking at the individual files in Github, but it’s harder to catch the changes when playing a game that requires fast reaction for better rewards and also encourages looking in the center of the screen as opposed to looking at the characters as they gain. Of course that’s totally alright as it makes total sense for the food to be the focus of the game, but it might be good to assist players in catching the gain amidst the action. While these might not be all the solutions or the best ones, some ideas might be:

I suppose maybe a way to make it appear more like a competition, perhaps instead of feeding both their favorite foods, you could toss the opponent weight loss pills, or vegetables, or something. Instead of her gaining when you feed her, she naturally gains at a consistent weight, but when you throw the undesirables in her face she actually loses weight. This could also consequence you, as if you mess up and feed yourself with these weight loss machines, you would also suffer the same effect, adding a risk to guessing wrong. This would also stop any easy means to achieve the highest weight stage while disregarding the score, which I did, where I just mashed the key in my characters direction. While that obviously results in a bit of a loss, you want people to earn being able to see that sweet, sweet chub, right?

Anyways, fun game, pretty solidly made, and overall good art! It could use some fleshing out, if you continue to work on it, if not, it’s a good first project to show the community, and I can’t wait to see what else you might come up with!

P.S. If you continue working on this, definitely ready to see some more weight stages

P.S.S. Also just a note, but I noticed that Leaf’s final stage looks a bit smaller than Horie’s, just thought I’d point that out

Excited for a level 2 with increasing weight. Could even have them lose weight between days.

Just a suggestion, would there be a better way to have the cue of who to give the food to closer to the characters? I’m not trying to stare at fruit while I play a game about chubby cat girls, if you know what I mean.