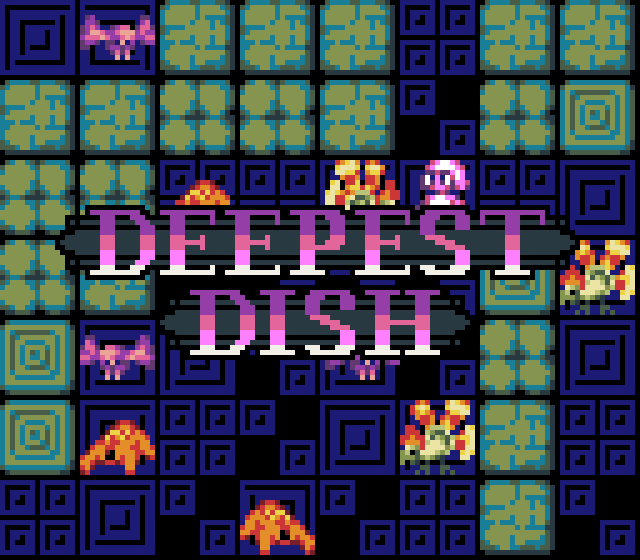 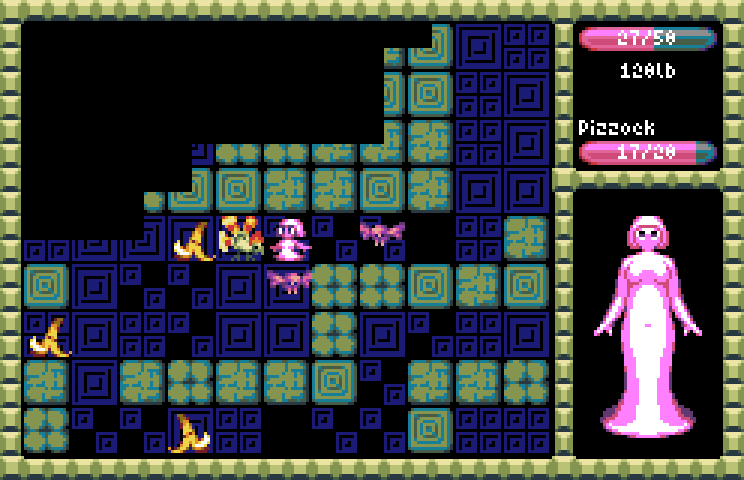 A small dungeon crawler with a written narrative beside it. I’m more than done working on the game itself; I’ll only be fixing any glaring issues with the web export, if any turn up.

a very good small game if i ever seen one

Good game, but it could be better if she was moving faster.

i can’t seem to be able to upgrade, is that not implemented yet or am i just hitting the wrong buttons?

I also thought that, but I was confusing letter “l” with 1.

A charming little roguelike! At first I really wished there was a wait button, but once you realize enemies don’t chase you perfectly around corners it feels a lot more strategic.

I do wish there was a little more to the ending, considering all the narrative building up before that point, but I suppose it fits classic roguelike fashion to be a simple “Congratulations!” screen.

I really enjoyed this, the rouge-like aspect was fun, and the journal entries were very well written, I played through a second time and stayed on the first stage dying to enemies so I could read it all. Which is why I would like to suggest an option to read through all of the journal entires after completing the game so, if completed early, you don’t have to put the extra time into dying endlessly to reach the last one. Otherwise it was amazing!

I think this is definitely my favourite of the gain jam as of the time of this comment. The only criticisms I can think of are wanting for a way to stay in one spot so enemies instead go to you and also just to be able to read the rest of the journal entries since they were like a reward in of itself and very well written

I agree with the feedback regarding a wait button and a way to read the journals at the end. The writing in this game is very good, I appreciated all of the journal entries.

The later floors started to feel a little too big as it took a while to retread back to the last and second to last floors after a close call.

Despite that, I think this game accomplishes what it sets out to do and I enjoyed playing it!

My only issue with this game so far, aside from the fact that it’s better to have the enemies come to you, is that it takes up CPU like no other’s business. And I would not expect that for some pixel based game, but my guess is the floor generation system for this goes a bit ham and has no limiter on it.

A really good entry! Had fun with this one, although I did see some room for improvement.

Just to start from the beginning, I think the introduction to the narrative is a bit heavy with terms the player hasn’t been introduced to, it’s a bit much to take in all at once. I will say though, it does establish the protagonist as somewhat studious, and makes sense from the perspective of a journal. I still just find it a tad new-player unfriendly.

A wait button would be appreciated for sure, since there’s lots of situations where you take unavoidable damage. The only way to get around enemies closing in to a certain degree was seemingly to break their pathfinding on a corner, which felt a bit more like breaking the game than engaging with it.

Having beaten the game I think the overall flow is good, but once you’re upgraded enough there’s no reason to engage with enemies at all, it’s just a rush to the last floor to maintain as much health as you can. I think it’d be good if maybe with certain weight milestones you got some form of temporary buff, such as a point of extra damage or something, maybe even having a wait ability be something unlocked at a certain weight.

Also I have no idea if I saw all the daily entries having beaten the game on day 11, a way to read the entries once beating the game would be great.

This is actually pretty great. I really love the writing, but the biggest thing to me is that I do wish that there was more management in-between runs to spice it up. Maybe abilities, perks, upgrades or something like that. Also maybe a higher visual weight cap considering how high it can get after a few runs.
Also a wait mechanic would actually add a ton to the gameplay in regards to strategy.
All in all I do really enjoy this, and the writing is great.

Nice little game, and the enemy AI provided some incentives to maneuver around to try and keep the first strike. While sometimes annoying, I think not being able to wait a turn actually makes it a little more engaging.

I finished on day 10, and hope I didn’t miss any further messages. I agree with above, would be nice to be able to read the entries after beating the game.

Fun, but if you ever add more to this game (like a winning journal log, PLS) I have two suggestions: Let the player hold a movement key to keep going in a direction, and replace the footstep sound with something more squishy to match the slimey body the player has. Also, an assortment of gulp sfx when you defeat a monster would appeal to me a LOT but if thats not yr thing thats understandable.

How can I eventually move up a level?

It’s rare that I see something I find personally very compelling in these games, especially a game jam game considering the restraints. Even with the game play itself I wasn’t expecting much. Admittedly it’s not the best game loop, as people have mentioned. However it is functional, and serves as a vehicle to get to the next part of the journal logs.

At first I dismissed them to get to the game play, but clearly that was a mistake. These logs are extremely well written scraps of story that slowly build in a perfect drip pace of content. It was awesome and nuanced to watch the slow evolution of the character, and their academic studying and understanding of what was going on. Considering my preferred form of kink content is literature, it was a really special treat.

I was actually disappointed to have beat the game only to find out there was no verbose ending description, and that I hadn’t finished the logs. It’s actually funny, I did a second run where I simply died as quickly as possible over and over to get to those logs, because they don’t depend at all on what size your minion manages to get to within, only how many times you’ve gone in.

Wow this is superb. The writing is fantastic, though I did notice a small typo in the intro journal entry of “marital” → “martial” (Unless the protagonist is going around practicing some crazy wedding magic)

Agreed with others regarding a “wait” button, but the thing holding back my enjoyment the most was having to spam buttons to keep moving. Adding the ability to hold a key down and keep moving would help a lot.

i love a dungeon crawler, as simple as it may be there is something compelling i find in spacing myself with enemies to reduce incoming damage, as well as the enormous amount of writing in the logs. i wish performance in the dungeon crawl was tied more to getting the logs, perhaps finding them in the dungeon, for instance. it seems a little incentivized to just smash yourself into enemies with the express intent of dying so you can see the story unfold

Great game, but I wish I could read the journals without having to let myself die, especially towards the end when I have 500hp