Lol, sorry. Can you at least post image previews of the game on the post? My computer detected it as malware so I want to at least know what I’m downloading : P 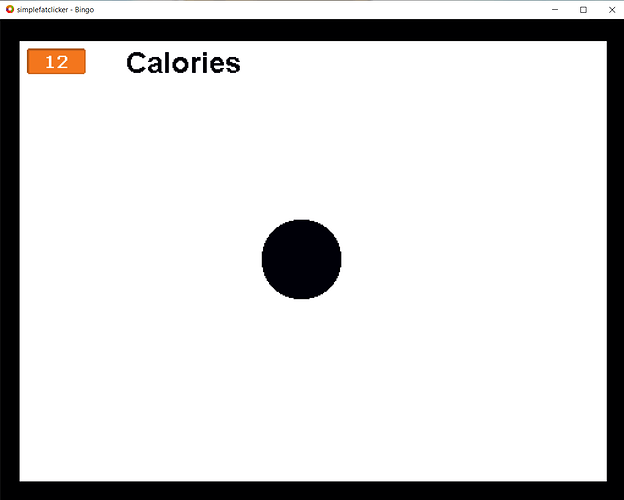 talking about something not engine based. but depending on how you go I could see this game can go to large sizes much easier if the weight is mostly descripted by text over images. of course thats me go the the size limits you want. but the biggest limit on achievable sizes in the site is that with art you got to draw it but text its words. and While I won’t say writing the size well is a easy fast prospect (considering I would doing the same with my none art skill) it is easier the drawing.

I didn’t understand most of this reply but I can confirm that I will be using text and numbers for the project. I’m no artist, sadly.

I might be able to find someone that does free art and ask for a few icons (that don’t change) for the upgrades perhaps but I’m mostly gonna stick with text. Think… fat cookie clicker with a few new mechanics.

I was saying that depending on how Far you wish to descripe the weight gained you could go for Some very large scale. like Building or larger. most fat games stop with Blob size for the player character. mostly since they are a bit rpg like so staying mobile is needed. but a Clicker where the “player” character does not need to move gives you freedom to take the weight Scale to larger heights if thats what you want

yeah, true. by text I don’t really mean there’s gonna be a section describing the character, it’s mostly up to imagination based off of the shown numbers at this time.

hmm Personally feel some description would be nice. but thats just because I’m not one for Pure numbers by the size especialy when the larger sizes I like numbers start getting over the top. BUT thats my preferences you do you

EDIT one thing I would add is KEY point decription could be vauge just a rough idea of the size. like “you no longer fit in your car” or “the resturant shatters around you” give a idea of the size but no details

forgot to mention, this is not the final name. if you have any ideas, feel free to reply!

Idle gains? I think I saw another game with this name but it’s not weight based

Ok, so to be clear- the only thing that’s currently in the demo is a clickable circle and a click counter, right? I’m not missing something?

Yeah, I didn’t know if I was allowed to post a projects post without some kind of project already made so I whipped together a very simple clicker as a demo.

There are plenty of projects in this section without anything playable. For better or worse. What denotes a project is that it’s something that’s actually being developed. Something that’d need to be posted in Ideas would be if someone posted “These mechanics would be cool, someone should make that”

Oh, didn’t know. This is my first post and I barely lurked before. Thanks for the info!

Could just use royalty-free pictures of people and just cycle them out depending on the weight.

Don’t think that’d work very well, with the different body shapes and appearances, especially when the weights start getting above 500 or so and besides. There’s no cap for the numbers, technically you could go to a million and beyond, it’d be impossible to get infinite images.