Do you think Pathfinder second edition is better than Dungeons & Dragons fifth edition?

To people who have played both systems, which one do you think is a better system? Dungeons & Dragons is much more popular than other systems so far, but it seems like the current edition of Pathfinder has some interesting mechanics I want to see done in Dungeons & Dragons as well.

Pathfinder 2e appears better for character customization due to the greater modularity of character advancement where you usually have to select one or two feats each level up depending on your class and ancestry. In addition the ancestry of your character continues to give you features due to the feats system where as in D&D your race only gives new features up to fifth level. Dungeons & Dragons fifth edition only has feats as an optional system, it requires you to sacrifice an ability score increase, and in addition there are feats of vast differences in power lumped under the same category, so picking a certain feat may not be a good idea. The feats in Pathfinder 2e are in different categories that can only be taken in the correct category, so they’re not competing against every feat in the game like D&D 5e.

Message to forum developers, I intended to put this thread in “Systems & Games” because I thought it fit better, but I can’t do the because the software requires me to add a tag to this thread when there’s no tags to select in that category.

D&D 5e’s probably better than PF 2e, cuz I can actually read and play 5e, while reading PF 2e’s rules and seeing how they ruined literally everything I liked about 1e makes me so physically ill I can’t finish the book.

Pathfinder 1e is best, though. Way more options and freedom than either of these. There’s more numbers to add together in it, though, if that’s a turn-off.

What are the things that Pathfinder 2e messed up in compared to its first edition?

Literally everything except sorcerers being able to pick different spell lists based on their origin, and I guess the way they handle magic weapons and armor is alright. Besides tha,t they basically just Frankenstein’d a game together out of the worst aspects of D&D 4e and D&D 5e instead of just, y’know, making an improved version of Pathfinder 1e.

That’s all I’m going to talk about this.

So you’re not going to talk about what you liked the most about the first edition of Pathfinder?

Really tough call, to be honest. I did cast my vote for Pathfinder over D&D, but both games have their strengths and weaknesses.

5e is easily more new player friendly, but that’s as much a detriment as a positive. As you level, a lot of times the only change a player sees is in their hit points and proficiency score. If you aren’t playing with the feats system, a player can feel very detached from their character and their progression. Combat also feels rather straightforward, sometimes clunky, and often a bit dull.

In terms of positives, D&D does possess the better skill system. The simpler rules allow fewer chances for a case of analysis paralysis, and there seems to be a lot more trust in the DM to make a sound judgement call or to establish their own challenges.

I will also add that I’m currently playing in a 5e game, and working on a campaign of my own, so I certainly can’t write off the system as hot garbage, lol.

As for Pathfinder, it definitely trumps 5e in combat, hands down. The 3 action economy, combined with Attacks of Opportunity being far less common, makes the fights a more fluid, mobile, and creative experience. PC’s gaining feats every level also makes the leveling experience a lot more enjoyable, and as a player, you feel like your choices matter more, though some of its detractors do feel this over complicates the system. I disagree, but moving on.

Now for the negatives. The Hero Point system is honestly pretty weak as written. Also, Paizo’s editing department needs to canned, as the books are terribly laid out, with rules spread out in the most oddball way. Analysis Paralysis is very likely because of this; highly recommend keeping the wiki open at all times.

Continuing in the same vein, some things, like the Wounds system, are very intuitive once you’ve played with it a couple of times, but are explained terribly in the core rule book. I swear they had no one proofread the CRB before they published the thing. “Frankenstein’ed” is a good way to describe the rule books, as they really feel cobbled together in the most awkward way possible.

Of course, there is one reason, and one reason only, that Pathfinder is truly the greatest system of all time: 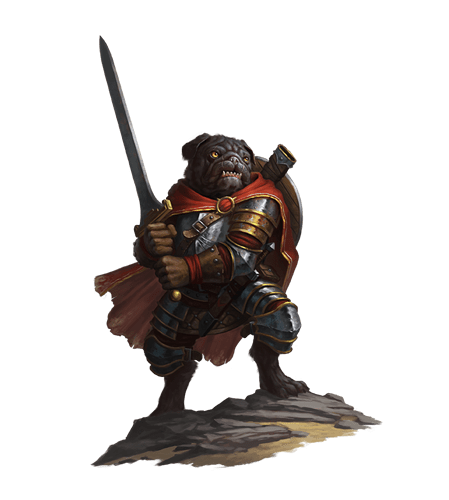 I can play a Pug in Pathfinder. How else would you want to experience a High Fantasy adventure then as the Best of Boys?

Hey, my favorite! PF2e vs D&D5e vs PF1e edition wars!
I’m definitely a 2e fanboy, enough to say that Korota is hilariously overdramatic, even though I get it. Even I will say they probably could have just Pathfinder 1.5e and carried on for many more years, that’s basically what Starfinder is. 1e with much less of a chaff. But I personally enjoy 2e greatly and I think it is for the best they dropped everything from 1e and start over. It is just a much stronger foundation for an enjoyable team-based RPG than D&D3.5e ever was.

The customization may be fantastic for 1e, but it gets tiring dealing with things like having 4 separate Athletic skills to level, the abominable feat taxes to do ANYTHING without eating shit (Point-Blank Shot is awful design!), the agonizingly long time it takes to recover from stat damage, and the sheer devotion to Caster Supremacy. At some point, the options to customize just couldn’t bear the weight of being attached directly to a two-decade old system made by people who could not possibly seen how the tabletop scene would develop.

I certainly have problems with 2e, but nothing (other than poor Alchemist…) ever infuriated, confused, or just BORED me in the same way 1e did.

And as for 5e…yeah, beginner baby game gets really boring to play and watch. Warlock is an awfully designed class.