Also known as a buggy mess from a derpy slime. 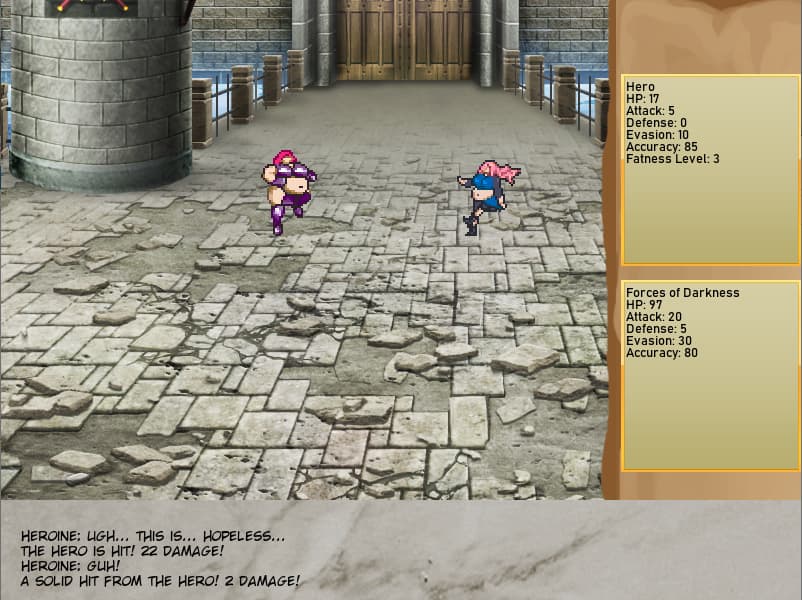 Yet another half finished, buggy “game” (far more of a demo) from the slime that can’t make functional games in a time limit (or at all). Build up a dungeon (with no real limits) to defeat a heroine. Or, make a mess of it, either one works.

Controls:
Z for selecting with the selector, as well as advancing text boxes.
Mouse click for buttons, as well as text boxes again.
Arrow Keys to move the cursor, up/down moves up/down in building and left/right will toggle between building options.

You will need a front door for the hero to arrive from. And yes, this has no sound, recording takes time that I did not have. Yes this game is incredibly buggy also, there’s no shortage of parts I’d want to go over and fix but alas, no time.

It looks like whatever menu is meant to appear isn’t appearing for me. When I attempt to click the empty space on the right once the cursor appears the game throws an error and crashes.

is there a way to increase the window size

@Anothermane Not really. I’m aware it’s horribly tiny, something to fix on a non-jam version
@Sixes You use the cursor to select on the room(s) itself, not the empty space. Pick the doorways… it shouldn’t crash still but I won’t be surprised with how it was.
@humblesasquatch Yeah that’s fixed, and also made sure to add another mirror. (Just took a bit to upload that)

Also credit to https://twitter.com/Chiyox__ for the lady’s talking pictures, but I had to ruin them a bit by shrinking them to fit the window.

Its cool. Thanks anyway

You can use a tool like Sizer 4.0 by Brian Apps to upscale the window.

The good thing I love the idea of Making my own Dungeon the only thing is that it is hard to make your Dungeon lay out.

Yeah, all too aware it has several flaws. With basically every single thing I added there was several things I wanted to polish or fix, but I barely got this out by the deadline, so it is what it is for this demo version. Deleting stuff and a less clunky system for placing stuff are both very much on the table, there’s some systems I stumbled upon that should help with this but again, gain jam ment I didn’t quite have time for them.

I can’t extract the application

I know this is very late but when I load up the game all I get is a black screen.