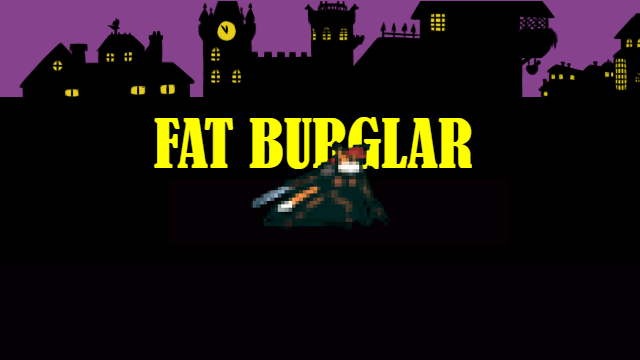 So I kind of just decided to jump into this at the last minute with essentially no game design experience and about the same experience with doing sprite art. That said, this is incredibly janky and very, very short, just something I wanted to put together to see what I could do with the limited time and sort of act as a trial for some of the things I’ve been wanting to do with weight gain games and mechanics. Also there’s no sound. I spent like about 30 minutes slapping some free music and sounds together and none of it even works once it gets compiled, figures. >:I

The game centers around an anthropomorphic fox thief sneaking into places and getting into oddly prevalent and not so oddly fattening shenanigans. This game does include female furry weight gain, a little immobility, and slime inflation, so if those aren’t your things, you might want to skip it. There’s no nudity, just some wardrobe malfunction leading to pixelated underwear and bellies.

The basic controls are just using the arrow keys for moving and jumping, and “Z” to attack. If you find yourself in a menu, either wait a couple seconds or press any key to continue. Hope you all enjoy this mess! I know I’m cutting it extremely close on the time limit lol

Okay, so I really don’t know what I’m doing, so sorry about any problems, but on my end, when you extract and click on the “New Project” app it gives off some antivirus warnings. I’ve seen it with other entries so I’m pretty sure that’s common. I don’t know how to code anything and just used Construct 3 to slap this together, but I really don’t think it’s anything beyond my PC being “Hey, I don’t know what this is.”

Also password to use at this link is “Slime”

I spent like about 30 minutes slapping some free music and sounds together and none of it even works once it gets compiled, figures. >:I

I spent two hours to find the right ones and, as result, made by myself using instruments in FL Studio XD

I would glad to see any screenshots or something!! It requires 500 MB, woah. I think I’ll try tomorrow ^^

S lime. The S is capital. Its case sensitive

I really wanted to try making some music from scratch just to see how it would come out, but it was literally the last thing I did so there was no time. If I get the time to work on it again might be fun. I’ll have to check out FL Studio, never heard of it!

As for screenshots, the whole game is probably like 4-5 times the length of this so I’ll just upload this one showing the gist of it, not including weight gain elements. 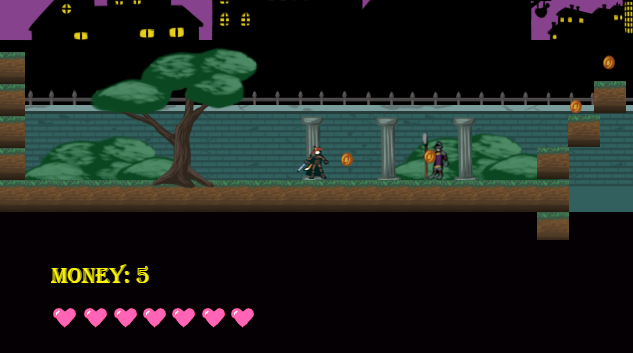 Those I’d rather keep as a surprise since there’s not many assets overall. There’s a failure state caused by weight gain, but it kind of takes some maneuvering in the slime pit to get to since I didn’t balance the system too well, and the slimes either add too little weight to the player or jumping/starting to move removes too much.

As for the file size, good call! I was so tired I thought it was just poor optimization on my end, then realized that it was not only that, but the fact that Construct 2 just places multiple versions in one folder, so I added a Windows and Mac version separately to the original link for convenience. I left the original upload completely untouched, but I think it’d be a bad look if my game took way longer to download than to beat.

Also just wanted to point out that this game is kind of a mix of things I’ve seen others do with their work that I wanted to try playing with myself. It’s really a pale imitation of those fun things, whether it’s a similar weight gain mechanic to games like Sonic XL by Captain Bozo and Ranger or Calorie’s weight gain platformer, or the game over screens similar to things done by j867bbw or Grimimic’s Stuffing RPG! I would be remiss to not give credit to these creators, and I’d like to also thank my friends as well for their assistance, whether it was technical support with some bugs or just support overall, especially Majority Integration, Yuiyana, and Default/Metroidbob.

Thank you! And yeah, I need to work on the attack animation a bit, as well as a score of things. Hopefully one day I’ll have the time to make this into a full game, or something similar even, but that’s a bit of a long stretch so nobody should get their hopes up. Ultimately I kind of wanted to see if it was something I could do within the time limit, and it was a fun challenge to get it done!

Also here’s some backup links aside from itch since I’ve been told people have had problems downloading from there.

Win64 version, the game is a neat little slice, but there seems to be something wrong with some of the graphics. Both times the game throws a big-text sentence at me, the last word is missing, like falling down the pit, it says "YOU ARE _______ "

For a first attempt, very well done all things considered.
Rough of course, but the art is solid. Some polishing and extension and bada boom, platinum seller.

Not sure really what to say here. The game is very short but that is expected for being a last minute thing as claimed by the dev. I love the art assets though I just wish they where put to better use. That being said its always better to get something out there so still happy to have had the chance to play this game.

For a first time project this is great. It’s short, but it lays out a set of mechanics and creates an interesting premise.

This is so short that its really hard to say much about it. The animation quality is good, as well as the fetish art assets, however the use of the theme was extremely weak, bordering on non-existent. You could get through the entire game (which only takes about 20-30 seconds) without even knowing its there.

I would love to see a full fledged platformer in which you either need to keep the weight off of you or use it to strategically move through the stage. As is, though, this is more of a tech demo.

For a last minute first attempt, this was a good effort! You should be proud of what you managed to do in such a short time! I could easily play more levels of this, perhaps with more difficulty. Great art on the game over! Look forward to what you come up with in future.